Travel guide: Get hungry for Hungary

Budapest is more than just a nightlife hotspot. Explore the capital’s grungy but cool vibe on both sides of the Danube and find out what sets this European city apart. 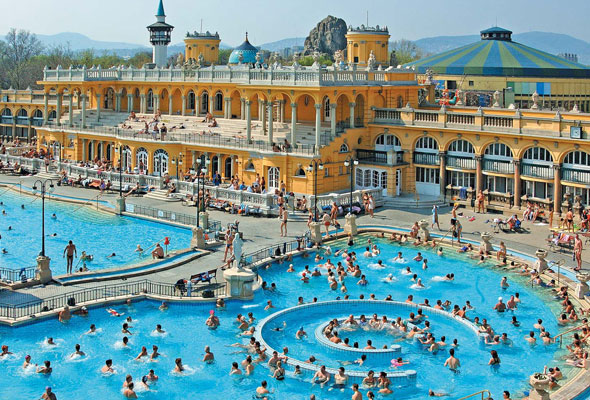 No, we don’t mean sit in the bathtub of your hotel. We mean, make like the Romans and soak in a bath built centuries ago – it might just be the most glorious thing you’ll do in Budapest.

The biggest is Szechenyi Baths, and one step inside will have you feeling like you’ve accidentally found your way onto the set of a Romanesque period film. The architecture is exquisite, the choice of baths enormous, and there’s a huge outdoor pool that makes for an incredibly relaxing Friday night in.

If it’s more of a party that you want, luckily you can just stay in the water; Budapest’s weekend spa parties are the stuff of many an Eastern Europe backpacker’s campfire stories. szechenyispabaths.com 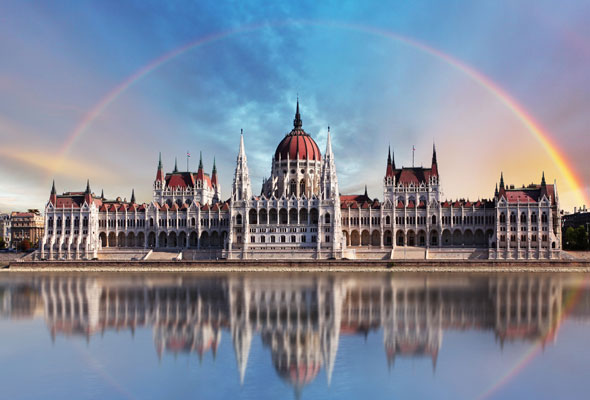 Getting political on holiday might not sound particularly exhilarating, but you’ll understand when you see the Hungarian Parliament Building: the place is enormous.

Known as one of the most beautiful legislative buildings in the world, this architectural behemoth has 691 rooms, 29 staircases, 27 gates and ten courtyards. At 96 metres high, it rivals the grand St Stephen’s Basilica as the tallest building in the city.

Non-EU citizens can take a guided tour for HUF5,200 (Dhs66) to experience the grandeur first-hand. hungarianparliament.com 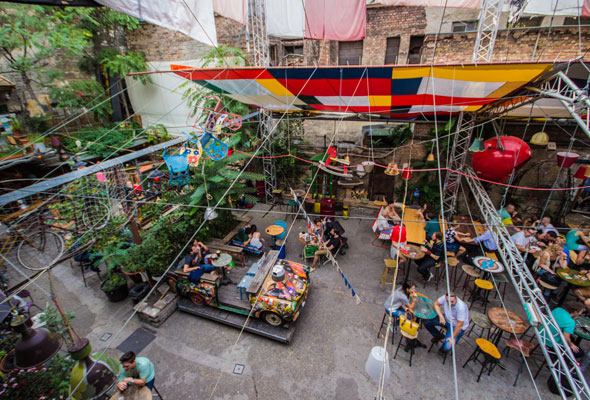 A dilapidated watering hole probably doesn’t sound like the stuff of dreams but get past the crumbling exterior (and interior, actually) and you’ll wander into the ultimate hipster hangout.

The venues inside are typically in a crumbling façade, with walls covered in bizarre doodles and décor featuring hanging bicycles, disembodied mannequins, car parts and even a Chucky doll or two. ruinpubs.com 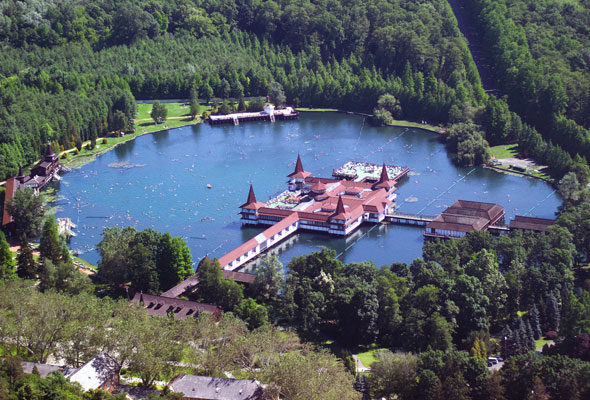 If you want to travel out of town, Lake Heviz is a fantastic option. Two hours southwest of Budapest, Heviz is the second-largest thermal lake in the world.

On a sunny day, there’s nothing better than grabbing an inflatable donut and floating around. There are also mud, salt and ice baths, a spa, and several indoor pools. heviz.hu/lake-heviz

DON’T LEAVE HUNGARY WITHOUT EATING (AKA DON’T BE HUNGRY IN HUNGARY): 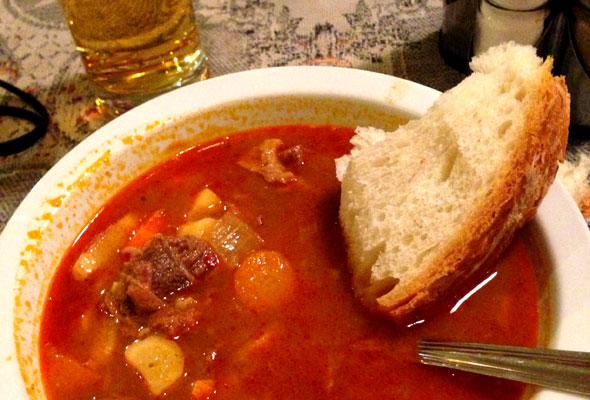 Probably the most famed of all Hungarian dishes, you simply can’t go to Budapest and not have goulash. Somewhere between a soup and a stew, peppered with the Hungarian people’s favourite spice (paprika), and filled with meat and vegetables, this is the ultimate winter dish. Pro tip: get one in a bread bowl.

Eat it at: Getto Gulyas (Dhs16 for two-course meal of the day and drink), Wesselényi u. 18 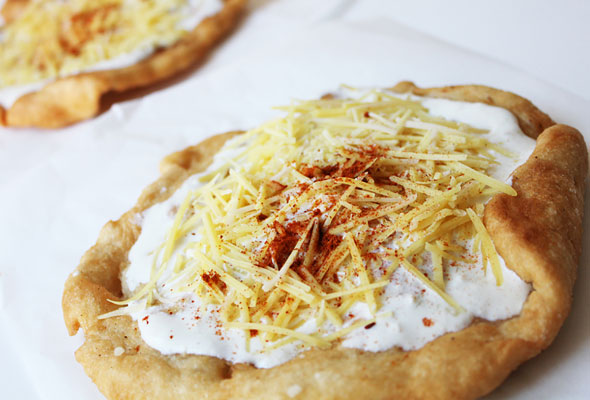 You simply have not known true love until you’ve eaten deep-fried bread topped with garlic, cheese, some form of meat, and a generous smattering of sour cream. If you’re on a diet: cancel it. 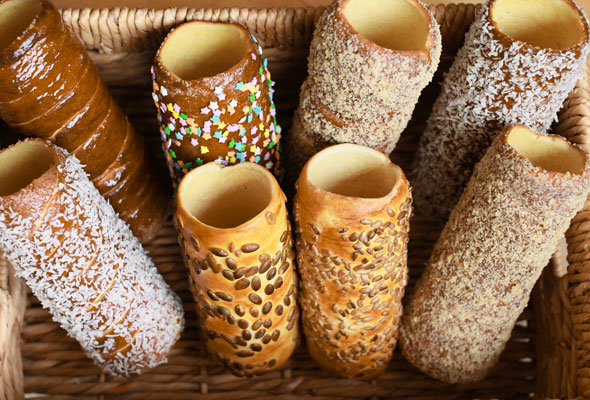 The original Chimney Cake may have been birthed in Transylvania, but the sweet, cylindrical, cinnamon and sugar bread spread throughout Hungary like wildfire and is now their most beloved dessert. The best ones are coated in nuts or chocolate.

Eat it at: Just about any food stall in the city. 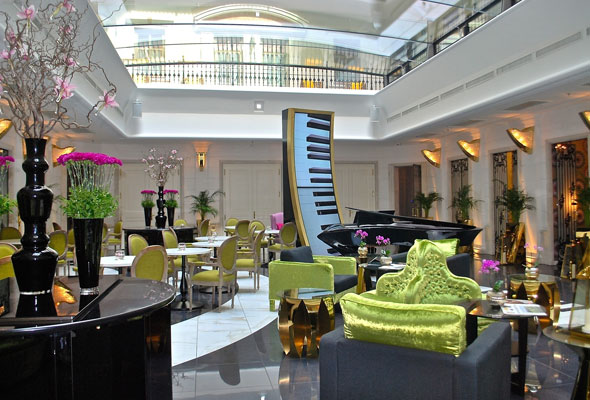 Think boutique with a capital B. This lush hotel near St Stephen’s Basilica has it all: pool and Jacuzzi, chic rooms with all the fittings, and a plush rooftop courtyard complete with cabanas and yoga classes if you’re game. Expect to pay at least Dhs1,000 a night.

Ornate architecture and a façade to rival some of Budapest’s most significant buildings, this hotel is beautiful. It’s luxury, but not snooty. Rooms start from around Dhs550.

Arguably the hippest hostel in the city, on account of it actually being located within a ruin bar. Its no-nonsense digs make it perfect for the budget backpacker. Expect to pay about Dhs50 for a dorm bed.

Home to all things cool, bohemian and artsy, this buzzing inner-city district invented the ruin bar, and has birthed some awesome clubs, restaurants and street art. 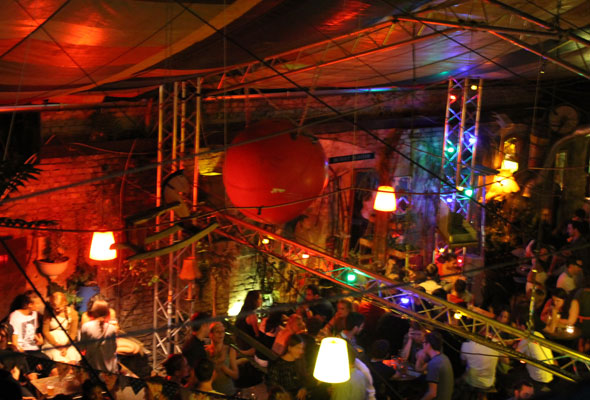 Want to know what all the locals are talking about when they suggest going out to a ‘ruin bar’? Szimpla Kert will give you an introduction like no other. The space actually houses six bars, all with their own ruin bar-esque quirks. Soak in the leafy greens, the cheap drinks, and the graffiti on the walls – actually, you’ll probably be invited to write on it yourself. It’s all part of the charm.

Elizabethtown’s colourful walls and facades aren’t your typical hoodlum-with-a-spraycan type scenario. In fact, in embracing graffiti, the area has become something of a street art magnet. 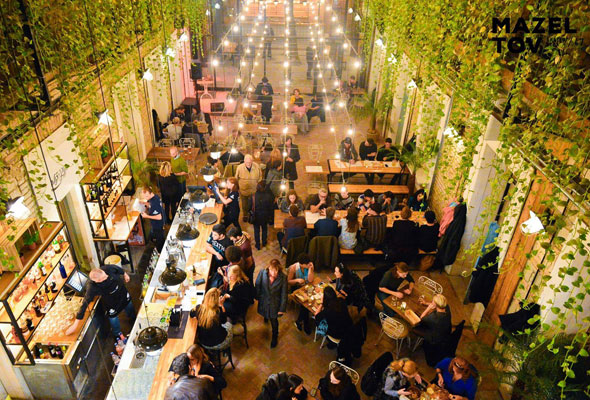 You can’t get much more boho than Mazel Tov – which also doubles as a ruin bar. Thankfully, the large, airy ‘cultural space’ doesn’t get lost under its hip vibes, and serves great coffee, drinks, food and live music. Things can get a little wild later on.

The grubby exterior and red and white-checkered tablecloths belie the culinary genius behind the closed doors of Kadar Etkezde. It’s like going to your grandmother’s house for a hearty dish of something you can’t pronounce. 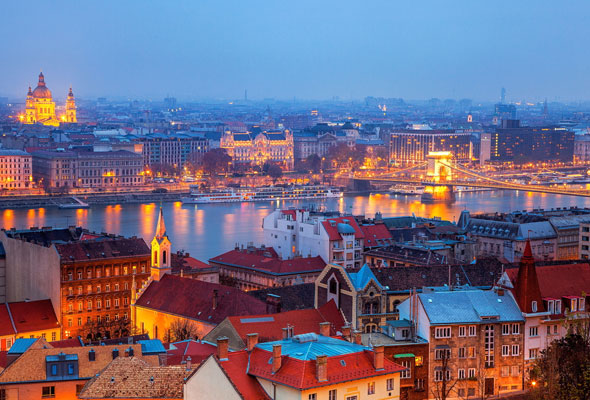 – About 1.8 million people live in Budapest

– Budapest was two cities – Buda and Pest, separated by the River Danube – until 1873, when they were joined together with neighbouring Obuda. Citizens still refer to the two different areas as “Buda” and “Pest”.

– It’s actually pronounced “Budapesht”, and the locals really don’t like when you mispronounce it.

– Budapest has the oldest underground train system after London.

Sport & Fitness
Travel
Travel Guides
EDITOR’S PICKS
Exclusive Reveal: Topgolf Dubai is here and ready for action
READ MORE
65 of the best outdoor bars and terraces in Dubai
READ MORE
7 brilliant dining deals in Dubai this month
READ MORE
18 of Dubai's most Instagrammable breakfast spots
READ MORE
MOST POPULAR
In pics: 13 of your best photos of Dubai's incredible fog this morning
Abu Dhabi updates road entry requirements - January 2021
Did you feel it? Minor earthquake tremors felt by UAE residents
The stunning Hermès Carré Club is now open in Alserkal Avenue
Pics of the week: Your best photos of the UAE
YOU SHOULD CHECK OUT
Our website uses cookies and other similar technologies to improve our site and your online experience. By continuing to use our website you consent to cookies being used. Read our privacy policy here.