Made in Abu Dhabi: trailer released for Brad Pitt’s movie shot in the capital

Brad Pitt’s new movie War Machine is the latest Hollywood blockbuster to be filmed in Abu Dhabi – and now you can get a brief glimpse of the emirate in the movie’s first trailer.

Some 20 locations across the capital were used to create a fictional US embassy in Kabul, including ADNEC, plus part of the emirate’s remote deserts. Scenes were also shot in Ras Al Khaimah and some 2,300 extras took part in the shoot. 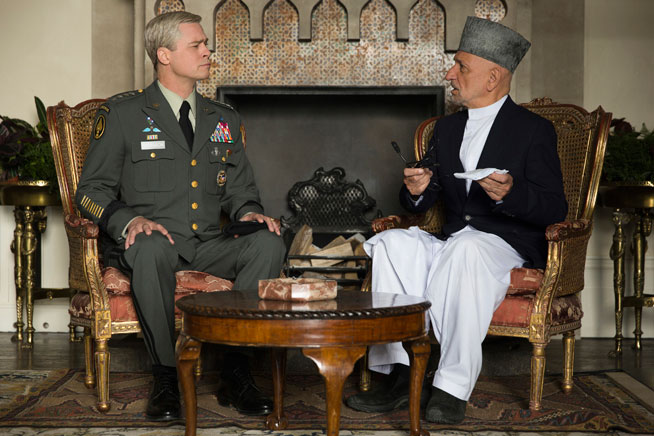 War Machine is based on The Operators: The Wild And Terrifying Inside Story Of America’s War In Afghanistan, a book by the late journalist Michael Hastings, and also stars tinsel town big-hitters Anthony Michael Hall, Topher Grace, Will Poulter, Tilda Swinton, Jonathan Ing and Ben Kingsley.

Directed by David Michôd, the man behind 2014’s The Rover (starring Guy Pearce) and the much-acclaimed 2010 film Animal Kingdom, War Machine is a satirical look at the rise and fall of a US general (played by Pitt) in Afghanistan, whose career comes crashing down after a media exposé. The film is made by Netlix and will debut on the website on May 26 this year.

Abu Dhabi is becoming a second home for Hollywood – other movies to have been filmed here in recent years include Star Wars: The Force Awakens, starring Harrison Ford and Carrie Fisher, and Vin Diesel’s Furious 7.

Culture
Film
News
EDITOR’S PICKS
9 royal-approved Dubai restaurants
READ MORE
12 incredible rooftop pools in Dubai to check out
READ MORE
16 of the best beach bars in Dubai for sundowners
READ MORE
Covid-19 rules in Dubai: all the updates you need to be aware of
READ MORE
MOST POPULAR
Join us for a preview of Fairmont Bab Al Bahr's Valentine's dine around
A new Amapiano brunch is coming to Annex at The Abu Dhabi Edition
Pay off your traffic fines in installments without interest
This stunning new gastropub is officially open at Soho Garden
Review: DIFC's new rooftop Japanese restaurant, Clap
40 places to celebrate Valentine's Day in Dubai
YOU SHOULD CHECK OUT
Our website uses cookies and other similar technologies to improve our site and your online experience. By continuing to use our website you consent to cookies being used. Read our privacy policy here.