There's a new board games store in Times Square Center

Time to unplug yourself and break out the cardboard…

Monopoly, RISK, Scrabble… admit it, these are the names that spring to mind when you think of board games.

And you’re not wrong, these classics have been the staples of most family game nights for decades. But for every person you speak to that loves Trivial Pursuit, there’s a sore loser that’s sworn off playing board games for life.

That’s where Back to Games – a newly opened store in Times Square Center specialising in everything from dice and card games to tabletop miniatures – hopes to shatter some of the preconceived notions that a generation of lapsed gamers may be fostering.

Sure, you can still pick up evergreen favourites such as UNO and the Game of Life at the store, but with a catalogue of over 1,200 games from all over the world lining their shelves, Back to Games offers no shortage of choices for someone looking to get back into the hobby. 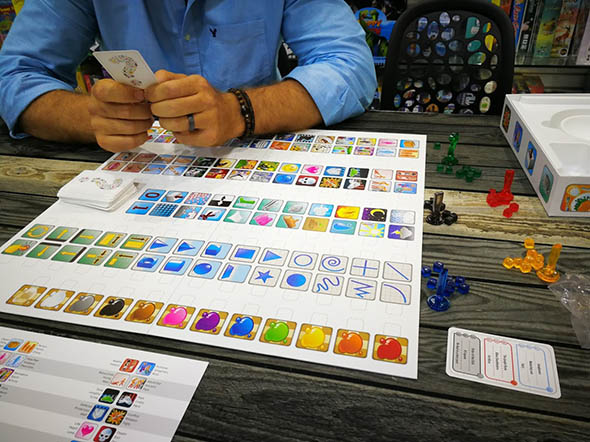 Want a co-operative game centred around saving the world from the outbreak of a deadly disease? Check.

How about a game in which you have to describe to your teammates the plot of The Taming of the Shrew without saying the book’s title? Yup, they’ve got that, too.

In fact, we’d wager that if you can think of a topic, they’ve probably got a board game for it.

This is actually the store’s second location after opening in Shams Boutik Mall, Al Reem Island, Abu Dhabi in late 2015.

Founder Mark Azzam notes “We are thrilled with our expansion to Dubai. There are many who already know of our brand here and would buy our products online through our webstore. Some would even drive from across the UAE all the way to our shop in Abu Dhabi to live the gaming experience. At least now, they will have us closer to them.”

Aside from the retail aspect, Back to Games holds themed gaming events in-store each night of the week, giving customers the chance to try-before-they-buy. Friendly and knowledgable staff are on hand to answer questions and teach games so you’re not left thumbing through a rule book. 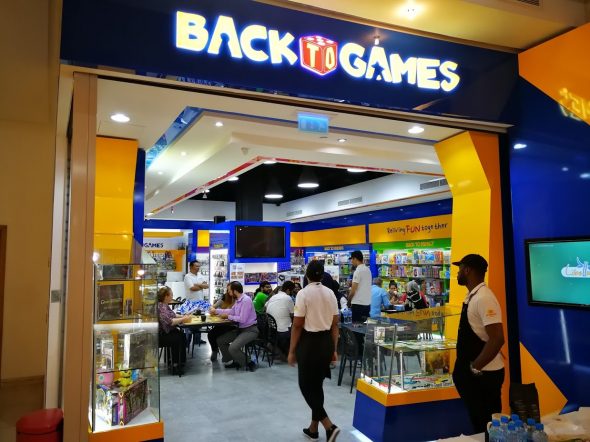 That sounds like fun, what kinds of games are there?

That’s not an especially easy question to answer, but here are some steadfast guidelines when it comes to tabletop gaming:

Board games – games centred around using a fixed, non-variable board as the main component. Players share the board, interacting with each other via the various elements of it.

Card games – while a card game may include the use of dice, tokens or a small personal board in front of each player, the primary component used to drive the mechanics are always the cards themselves.

Dice games – whether they’re using 6 or 20-sided dice, these games tend to favour luck and chance, rather than skill, as each dice roll determines the outcome of the players’ future actions.

Tile games – unlike traditional board games, which have a fixed area of play, tile games are endlessly changeable thanks to the ability to shift the various tile pieces each time a game starts. This makes them highly re-playable.

Miniature games – players use plastic or metal miniatures to represent themselves or the armies they control. These games can often be collectible allowing gamers to expand and customise their gaming experience in a variety of ways.

Culture
News
Things to do
EDITOR’S PICKS
Ramadan in Dubai: 48 iftars to try
READ MORE
Where can Dubai residents travel? Check out these 14 destinations
READ MORE
Rumours, facts and reveals: New Abu Dhabi bars and restaurants
READ MORE
UAE announces reduced working hours for Ramadan 2021
READ MORE
MOST POPULAR
#ThisIsNotABuffet: Here's how Alserkal Avenue celebrates Ramadan
Review: Could Hunter & Barrel be your favourite new steakhouse?
French restaurant La Serre to open in Habtoor Palace Dubai later this year
10 amazing things to do in Dubai this weekend: April 22 to 24
Sweet treats to enjoy this Ramadan in Dubai
YOU SHOULD CHECK OUT
Our website uses cookies and other similar technologies to improve our site and your online experience. By continuing to use our website you consent to cookies being used. Read our privacy policy here.