Well, THIS is awkward…

If you’ve been complaining about Dubai’s weather being less than perfect lately, a new movie trailer might have you counting your lucky stars…

One of the new trailers for the film shows our beloved Dubai being taken out by a huge wave – and not even the Burj Khalifa is safe from its watery wrath.

You can watch it here:

More…
*Made in Abu Dhabi: trailer released for Brad Pitt’s movie shot in the capital*

The blockbuster will tell the story of a satellite designer who must attempt to save the world from one seriously epic storm.

Think The Day After Tomorrow mixed with Volcano, with a healthy dose of Twister.

But some Facebook users commenting on the trailer have been quick to note that the filmmakers appear to have disregarded basic geography in their enthusiastic destruction of the emirate.

Check out the location of the Burj in this shot: 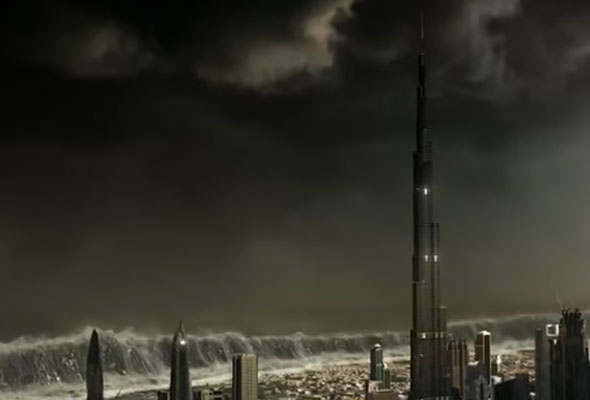 Does it look a little funny to you?

“I’m not sure yet but was Burj Khalifa moved near the coastline? Digital effects already dissolved Al Wasl and Jumeirah from the map,” said Oliver Santos. “What a disaster!”

Anna Nolano spotted the same issue, asking the valid question: “Why is Burj Khalifa on the beach?”

But the top comment went to Steve Patrick Moore, with this gem: “Please don’t flood I’m going to Karama today.”

Geostorm is set to be released on October 20, so we’ll see you in cinemas then – if Dubai is still standing, that is…

Film
News
EDITOR’S PICKS
Dubai hotels and restaurants to suspend entertainment until further notice
READ MORE
9 royal-approved Dubai restaurants
READ MORE
16 of the best beach bars in Dubai for sundowners
READ MORE
Where to get the Covid-19 vaccine in Dubai, Abu Dhabi and across the UAE
READ MORE
MOST POPULAR
8 of the best homegrown burger concepts in Dubai
Direct Etihad flights to Qatar from Abu Dhabi are inbound next week
Dubai Health Authority answers your questions regarding the vaccination
Expo Dubai 2020: What’s inside the Sustainability Pavilion?
Sheikh Hamdan launches project to renovate Al Fahidi Fort in Dubai
YOU SHOULD CHECK OUT
Our website uses cookies and other similar technologies to improve our site and your online experience. By continuing to use our website you consent to cookies being used. Read our privacy policy here.