If you’re scared of heights, you might want to look away now…

A professional kiteboarder has completed a world-first stunt, leaping off the helipad of the Burj Al Arab.

You can check out the video here:

The video shows the athlete surveying the city from the top of the iconic sail-shaped building, before launching himself from the helipad – an incredible 210 metres above the water.

In doing so, he completed the highest kiteboarding jump on record, smashing his own previous world record of 90m.

“Standing on the top of the Burj Al Arab helipad was a once-in-a-lifetime opportunity and launching from it, a global first,” said Jacobsen, who previously teamed up with Abu Dhabi Ocean Racing to leap from the top of racing yacht Azzam’s 30-metre mast.

“It took a lot of planning, precision and safety measures, but it all worked well in the end, and the experience was amazing.” 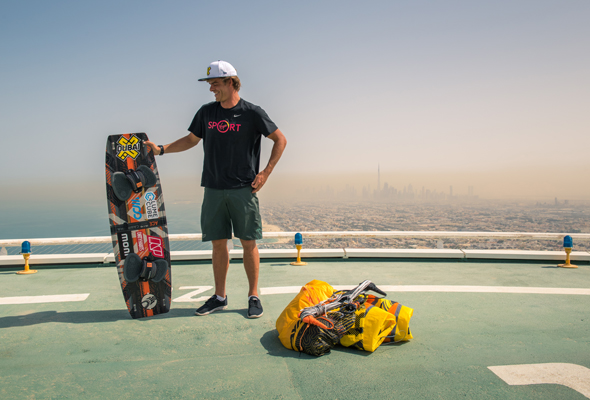 The video also features Hollywood stuntman Damien Walters, who can be seen leaping from a speeding car, with the Burj Khalifa in the background.

Not to be outdone, record-breaking wingsuit and BASE jumper Noah Bahnson (who is also a Skydive Dubai coach) performs a low-altitude parachute launch against the backdrop of Dubai Marina, before releasing himself into a freefall towards the sea.

News
Outdoor
Sport & Fitness
EDITOR’S PICKS
Ramadan in Dubai: 38 iftars to try
READ MORE
Where can Dubai residents travel? Check out these 14 destinations
READ MORE
Rumours, facts and reveals: New Abu Dhabi bars and restaurants
READ MORE
UAE announces reduced working hours for Ramadan 2021
READ MORE
MOST POPULAR
Urban Outfitters' sister brand Anthropologie to open in The Dubai Mall
This double vacation offer includes stays in both Dubai and the Maldives
Dog of the Month: ubk launches unique social media competition
Watch: A House of Artisans has opened in Abu Dhabi
Watch: How you can see Dubai from 555 metres high
YOU SHOULD CHECK OUT
Our website uses cookies and other similar technologies to improve our site and your online experience. By continuing to use our website you consent to cookies being used. Read our privacy policy here.