The Dubai government has a plan to go paperless...

You’ve probably seen this message in hundreds of email signatures: “Please consider the environment before printing”.

Now, Dubai’s government has a plan to go completely paper-free by 2021.

The ambitious goal was announced by HH Sheikh Hamdan, Crown Prince of Dubai, at a Smart Dubai event in the Dubai Design District on Sunday.

The royal also launched a Smart Dubai 2021 initiative, which represents the next step in Dubai’s smart and sustainable development.

More…
*Sheikh Mohammed to the Arab world: “Seize the day”*
*The Dubai government is giving Dhs1 million to cash-strapped tenants…*

“When Vice President and Prime Minister of the UAE and Ruler of Dubai HH Sheikh Mohammed bin Rashid Al Maktoum announced the Dubai Smart City project three years ago, he wanted to change the meaning of the term ‘technological advancement’ by creating an unprecedented model that integrates technology with our goals of ensuring the best standards of living, wellbeing, and happiness for the people of Dubai,” Sheikh Hamdan said.

Today we celebrate 3 years of achievement since the launch of Smart Dubai and the beginning of its second phase. pic.twitter.com/5rjSOofBk2

“Today, we mark the beginning of a new phase – ‘Smart Dubai 2021’ – that revolves around challenging ourselves and surpassing our own previous achievements.

“We are looking to build a truly smart city – one that will use technology as the key to a balanced and happy life.”

The royal said while we have already seen a shift towards digital government transactions, he believed the future of government was entirely paper-free.

“The government of the future will set plans and strategies to ensure the best possible standard of living for people and to save them time and effort.

“In 2021, we will celebrate the very last paper transaction in Dubai, and Smart Dubai will see to it that we achieve this mission.” 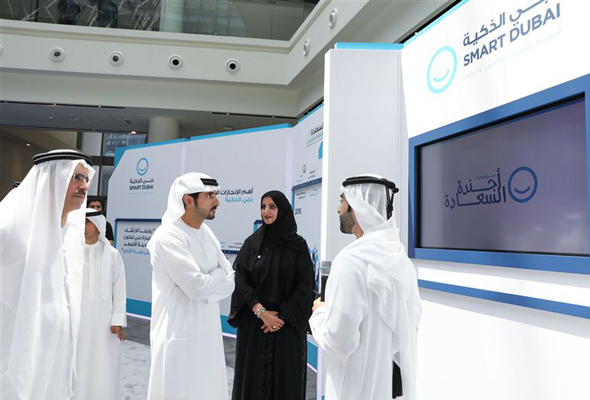 WHAT WILL REPLACE PAPER DOCUMENTS?

The government has created a new platform called Dubai Pulse, which will house all government data.

“The platform compiles all government data in one place, where the right information can be provided for the right people whenever they should need it,” Al Nasser said.

“It will facilitate the exchange of open and common data between public and private institutions and individuals, which will eventually contribute to the complete digital transformation of the emirate of Dubai.”

The platform will consist of three layers of data – the first will be accessible to the public, free of charge, while the second can be used for academic, professional, and commercial purposes, in exchange for a fee. The third layer will only be available to government entities.

Government departments have been ordered to start using the platform from this week.