You commute is about to get more interesting: Uber and the RTA have signed an agreement to make flying cars happen (but it’s unlikely to be by this summer)…

We love the Dubai Future Foundation – it brought the possibility of the Hyperloop to the UAE, as well as driverless cars and discussions about incredibly important innovations like farms that reduce the use of water.

Well the Dubai Future Accelerators Programme for 2017 has just finished up – you can read more about what they set out to achieve this year here – and one of the more interesting partnerships to come out of it was between the RTA and Uber.

What are they working on together? Self driving vertical take-off and landing vehicles that everyday people could use to commute around the city. We’re calling them cars as they aim to be an affordable form of transport – unlike a chopper or a plane. The RTA and Uber have signed a memorandum of understanding to develop this technology together here in Dubai.

And Uber has recently said that the technology could take off in the mainstream within five years.

@faz3 shot this video of the Commander-in-Chief of Dubai Police and the RTA Chairman playing foosball with Uber execs after they wrapped up discussions to bring flying cars to Dubai within the next 5 years. Read the full story on whatson.ae

A tweet from UberUAE explains how the flying vehicle technology will mean “less cars, less space dedicated to cars and more useful, vibrant urban spaces”. If you think about it, it could transform everything from traffic to property prices.

Internationally, Uber has made it clear that they want to make this technology an affordable one that many commuters could use: 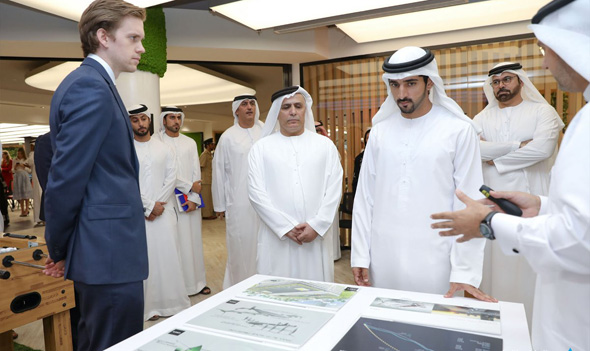 “What’s important to Uber is that this is an affordable situation,” Nikhil Goel, Director of Product, Uber Elevate and Advanced Programs, told Mashable earlier this week. “Until we get to the point where flying to work is cheaper than owning a car, it doesn’t become a true replacement solution for everybody. My goal is ultimately to make sure that it is cheaper than car ownership.”

Here’s a video that explains a bit more about the technology:

YAY, FLYING CARS, BUT WHAT DOES IT ACTUALLY MEAN?

So what does the memorandum of understanding between Dubai’s RTA and Uber mean? Well, that the two entities have agreed to work on the project here together. Does that mean it will happen? It certainly makes it very likely. MOUs aren’t signed lightly. They’re a commitment to work together on a project. So basically, if it’s technologically, economically and legislatively viable, it will happen in Dubai.

Also, Uber won’t actually build the technology itself, but will work with companies to do so and will be the facilitator between the vehicles and its users (just like it is with regular cars today).

This comes off the heels of the news that passenger drones may be flying people around by this summer in Dubai. We haven’t heard much more on this particular project (perhaps the Uber one has usurped it), but we will most certainly keep you updated.

As the prophetic Henry Ford said back in 1940: “Mark my word: a combination airplane and motor car is coming. You may smile, but it will come”.