Everything you need to know about Justin Bieber's gig this weekend

Written by:
Stacey Siebritz
1st May 2017

One of the first millennials with a YouTube channel is coming to Dubai this weekend. Here’s everything you need to know about the Dubai concert – from the songs to the buses, ATMs and traffic…

These days, millennials with their own YouTube channel are a dime a dozen. But Justin Bieber was one of the first.

Back in 2007, the Canadian singer songwriter was just a geeky 13-year-old with a bad bowl haircut and an acoustic guitar, when a talent manager spotted him playing cover songs on YouTube. A week later, he was singing for Usher.

A year after that, he released the platinum selling debut EP My World, followed by the triple platinum album My World 2.0. And now, ten years later, he’s getting ready for the only UAE show of his Purpose World Tour, when he arrives at Dubai’s Autism Rocks Arena this Saturday, May 6.

– Justin Bieber will be performing on Saturday May 6 at the Autism Rocks Arena – word is he’ll be on stage at 8pm.

– Ticket prices start at Dhs335 for regular standing tickets and go all the way up to Dhs2,800 for the backstage VIP experience

– The arena is located at the Dubai Outlet Mall on the Dubai-Al Ain Road n Doors open from 4pm, but you might want to arrive even earlier. Keep in mind, when Guns n’ Roses performed there in March, the traffic made many concertgoers late – including the band themselves!

– Bring cash to save on queuing at the ATMs (there will be some, but some is the operative word).

There are bus services

– There’s now a free Park ’N Ride service. Park at either Global Village Car Park or Dubai Outlet Mall and take one of the yellow shuttle buses to Autism Rocks Arena – the buses will run from 3pm until midnight, and the ride is subject to first come first serve basis. Maybe go to the mall for a late lunch and then hop on the bus?

– If you want to cab there you can then catch one of the free buses from the bus/taxi rank. The buses will go to Dubai Mall, Deira CIty Centre, Mirdif, Mall of the Emirates and Ibn Battuta Mall. Note though that these buses will leave as soon as they’re full and will be first-come, first-served.

Here’s one potential route to get to the arena (but we’d turn to Waze on the night if we were you): 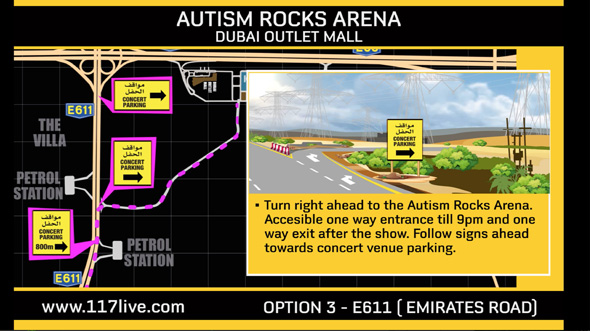 So what tickets are left?

As of Thursday afternoon the Super Fan Zones and VIP Platforms were sold out, but regular standing (Dhs335) and golden circle standing (Dhs595) are still available.

More on the man himself

A repentant Bieber is our favourite kind of Bieber…

Bieber has come a long way from singing R&B covers on the internet, shedding his sickly sweet, boyband-like image (that bowl haircut, for one), and replacing lovey-dovey ballads of earlier albums like Believe with some serious club bangers.

His makeover is largely thanks to big name EDM producers Skrillex and Diplo, who produced fourth studio album Purpose. It’s that platinum-selling record that his world tour is celebrating, set to cover six continents and predicted to make Dhs800 million worldwide.

Love him or hate him, you can’t deny the Sorry singer’s success. He’s one of the biggest selling artists of all time, scooping up Grammy Awards, smashing world records (he’s had more number one singles than The Beatles on the Billboard Hot 100 chart) and breaking hearts, thanks to a rabidly loyal fanbase who call themselves Beliebers. But despite impressive numbers, and the fact that even our hippest music-loving friends will quietly admit to having a Bieber song or two on their playlists (Where Are U Now, anyone?), controversy follows the hit-maker wherever he goes. Only time will tell whether Dubai’s Beliebers will get the best or the worst of their hero.

News
Nightlife
EDITOR’S PICKS
Ain Dubai will open with fireworks, live music and a drone show
READ MORE
Incredible Aura SkyPool to open in Palm Tower this November
READ MORE
Brit Grand Slam hero Emma Raducanu confirmed for Mubadala Tennis
READ MORE
What’s On Nightlife Awards 2021: Here are the nominees...
READ MORE
MOST POPULAR
Free parking announced in Dubai on Thursday, October 21
Atlantis the Palm's Culinary Month is back with some amazing restaurants
7 fun spots to celebrate Halloween in Dubai with the family
The best places to watch the spectacular Ain Dubai fireworks show
This brunch serves up delicious Arabic dishes and non-stop captivating entertainment
YOU SHOULD CHECK OUT
Our website uses cookies and other similar technologies to improve our site and your online experience. By continuing to use our website you consent to cookies being used. Read our privacy policy here.