The Flip Side is Dubai's hip new independent record store

Love vinyl? Then we have just the thing…

Nearly three years after our sister mag Hype broke the news of local music impresario Shadi Megallaa’s dream to open an independent record store in Dubai, his vision – The Flip Side – is finally opening its doors this week in Al Quoz.

At the heart of the store is a record section, stocking music from across a host of various genres, which Shadi says over time will “keep growing”.

There are also plans to turn the space into a community hub hosting in-store DJ sessions, documentary screenings and providing a seating area for people who want to stop for coffee.

Of course, no self-respecting record store would be complete without a stellar sound system, and The Flip Side boasts just that, with an impressive DJ booth to compliment and multiple ‘listening stations’ set up for customers to try before they buy. 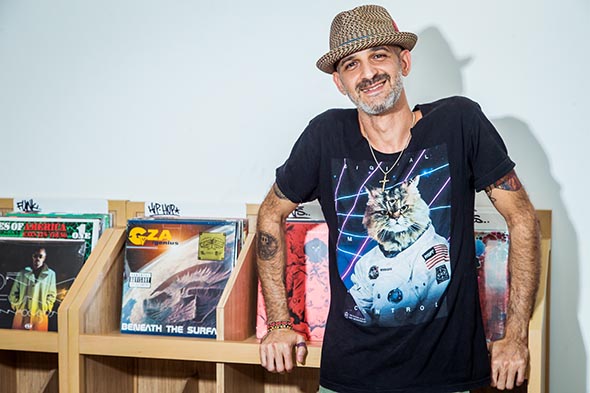 The Flip Side owner Shadi Megallaa’s says “The space is very flexible and that’s exactly what I had in mind,”

While not the first record store to open in Dubai – that title is bestowed upon the now sadly defunct OHM Records – Shadi imparted the importance of the medium compared to listening to a song on iTunes, saying “Most important to me is the physical aspect of collecting vinyl. The memory of buying a record stays with you: where and when you bought one,”

While overall global music sales have been down year-on-year, the Guardian reported that vinyl sales hit a 25-year high in 2016, citing the passing of music icons such as Prince and David Bowie as a key driver in sales as people purchase records as mementos.

Our listening stations couldn’t fit in one shot.. but here you go ? #dubai #recordshop #flipsidedxb #alserkalavenue

Shadi hopes the store will be a place where vinyl fans can gather and share their passion for the medium, to which he adds, “You keep discovering new music in your vinyl, like a new B-side or whatever, as your tastes change. It’s like having new music in your old music, and you don’t get that with digital files.”

The Flip Side opens its doors on Monday May 22 in Alserkal Avenue, Al Quoz. Visit the Facebook page for more details.

Culture
EDITOR’S PICKS
Ramadan in Dubai: 50 iftars to try
READ MORE
Where can Dubai residents travel? Check out these 14 destinations
READ MORE
Rumours, facts and reveals: New Abu Dhabi bars and restaurants
READ MORE
UAE announces reduced working hours for Ramadan 2021
READ MORE
MOST POPULAR
A four-day ultra marathon is taking place in the Dubai desert
Put the pedal to the metal with free tickets to Ekart Zabeel
Etihad drops massive summer sale with up to 50 per cent off flights
Spend your summer in a snowy cinema in Dubai
Tipsy Lion reopens with wallet-friendly deals all week
YOU SHOULD CHECK OUT
Our website uses cookies and other similar technologies to improve our site and your online experience. By continuing to use our website you consent to cookies being used. Read our privacy policy here.