beIN Sports is now officially banned in the UAE

Last week, avid sports fans across the UAE took to social media to enquire with their cable television providers as to why they were unable to tune in to the beIN Sports network.

I’m officially paying for nothing (sports package on eLife). No #BeIN, no subscription! I would like a refund @Etisalat_Care plz pic.twitter.com/2KGMPeHB8r

According to government news agency WAM, effective 14 June UAE authorities have banned the sale and subscription of all beIN Sports receivers and cards in the country.

Instead of the usual slew of NBA matches and Champions League reruns, current customers are greeted with a blue screen that simply offers the statement “This channel is currently unavailable”.

There has been no official statement clarifying if this is the result of the Qatar crisis, in which the UAE, Saudi Arabia and a number of other countries cut ties with the GCC member over claims that it supports terrorist ogranisations.

What we do know is that beIN Sports is a Qatari-owned television network so this is not completely outside the realm of possibility, especially since it also appears that their website, beinsports.com, is now blocked in the UAE as well.

The beIN Sports packages across both Etisalat and Du’s cable offerings are charged at a premium as they hold the exclusive rights to highly coveted sports tournaments such as the UEFA Champions League, English Premier League, Spanish La Liga, Formula 1 Grand Prix, NBA Finals and many more.

Twitter outrage follows expat discovery that beIN Sports feed has been lost due to Qatar blockade.

We have reached out to Etisalat and Du for a statement of whether customers will be entitled to refunds.

A Du spokesperson told us “We would like to confirm that the service of beIN Sports are currently suspended. Our customer service teams will be in touch with all the affected customers”.

The photo we snapped below will now be a familiar sight to frustrated customers looking to get their sports fix. 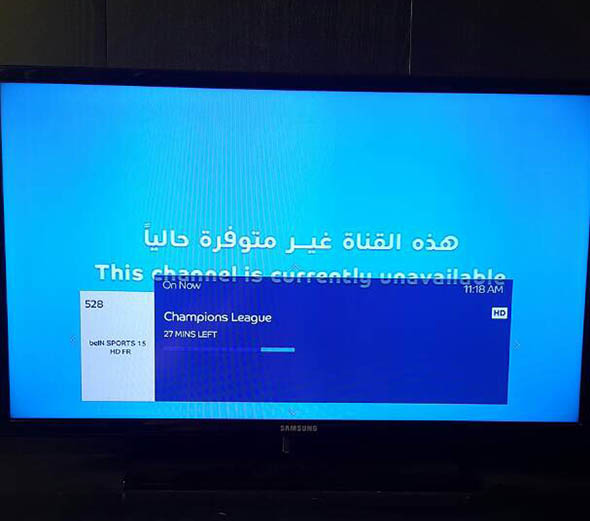