Is Deadmau5 returning to Abu Dhabi for Creamfields this December?

Dance festival Creamfields will return to Abu Dhabi for the first time since 2014 this December 8 – and the headliner could be Canadian DJ Deadmau5.

Check out this screengrab below from the Ticketmaster website, taken this afternoon. It suggests the decks guru, also known as Joel Thomas Zimmerman, could be joined in the capital by Swedish DJs Axwell /\ Ingrosso. 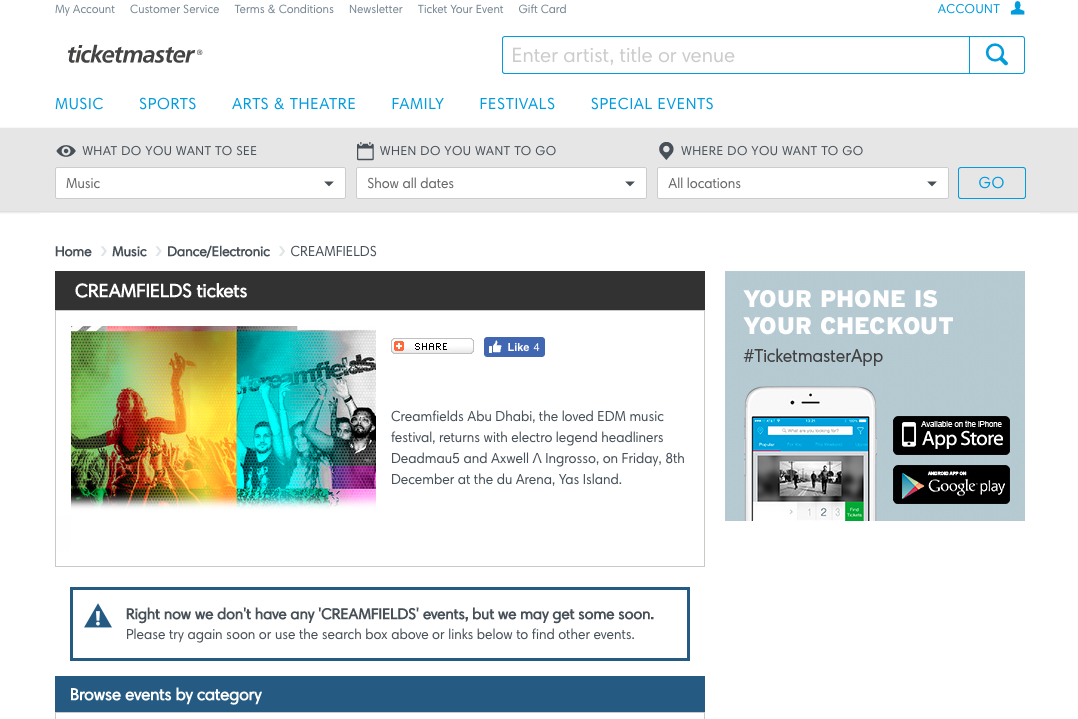 According to Deadmau5’s official website, he’s touring the US and Canada until October 31, but currently has no dates in the diary for November.

Axwell and Sebastian Ingrosso were previously members of dance act Swedish House Mafia and have been performing as Axwell /\ Ingrosso since 2014 (which means the page on Ticketmaster isn’t an old one). They also currently have no tour dates booked for November, according to their website. check out their 2015 hit Sun Is Shining below.

Abu Dhabi event organisers Flash Entertainment announced Creamfields will return last week with a short video on Facebook. The venue has also yet to be announced, but it’ll most likely be the du Arena, the same as previous years, if that Ticketmaster page is correct. Check out the original full announcement video below.

We’ve asked organisers Flash to comment and as soon as it’s confirmed one way or the other, we’ll let you know.

Clubs
News
Nightlife
EDITOR’S PICKS
Ramadan in Dubai: 48 iftars to try
READ MORE
Where can Dubai residents travel? Check out these 14 destinations
READ MORE
Rumours, facts and reveals: New Abu Dhabi bars and restaurants
READ MORE
UAE announces reduced working hours for Ramadan 2021
READ MORE
MOST POPULAR
UAE: Strict restrictions may soon be in place for those who aren't vaccinated
Review: Rainforest camping at The Green Planet Dubai
The rules for children wearing face masks have been updated in UAE
Etihad sale: Surprise gift boxes and a chance to win 50 times your airfare
Break your fast in style at W Dubai - The Palm this Ramadan
YOU SHOULD CHECK OUT
Our website uses cookies and other similar technologies to improve our site and your online experience. By continuing to use our website you consent to cookies being used. Read our privacy policy here.