Here’s hoping for a 3D-printed shawarma stand next…

In a move to further cement Dubai as the “smartest” city in the world, the RTA has announced that it will soon begin using 3D printing technology to manufacture many of the city’s ancillary transport-related paraphernalia.

That means things like bus stops, marine transport stations and even pedestrian bridges may end up being completely 3D-printed, which would save on resources and could potentially reduce costs and manufacturing times.

In an official statement, Abdul Reda Abdul Hassan, who heads up the RTA’s 3D printing strategy implementation committee said: “3D printing technology is advancing at a rapid pace across the world and the RTA is strongly inclined to be a forerunner in this generation of technology. It seeks to optimally utilise the technology by applying the world’s best practices of public transport industry and associated infrastructure,”

Whether we’ll see 3D-printed bridges in the style of those that cross the Dubai Canal is anyone’s guess, but it sure would be cool. 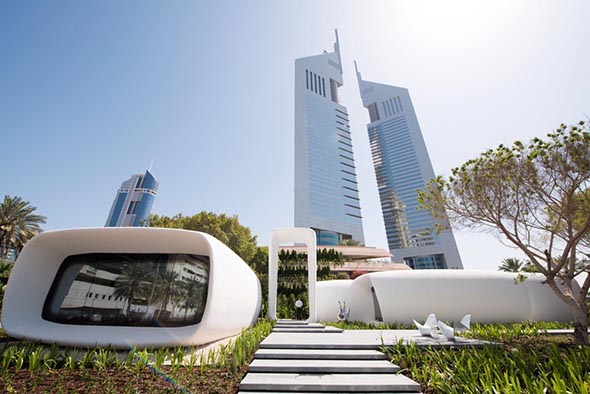 This wouldn’t even be Dubai’s first foray into large-scale 3D printing. Back in May 2017, the world’s first 3D-printed office officially opened near Emirates Towers, serving as a temporary office to the Dubai Future Foundation.

The whole building took only 17 days to print, and was installed on site within two days. We reckon this is a fairly good indication of the speed at which future projects of this nature could be achieved and bodes well for futuristic 3D-printed shawarma stands. At least, here’s hoping.

Transport
EDITOR’S PICKS
9 royal-approved Dubai restaurants
READ MORE
12 incredible rooftop pools in Dubai to check out
READ MORE
16 of the best beach bars in Dubai for sundowners
READ MORE
Covid-19 rules in Dubai: all the updates you need to be aware of
READ MORE
MOST POPULAR
You can now do watersports at Cove Beach Abu Dhabi
Watch: This is what it will be like to ride the Virgin Hyperloop
Five of the coolest places to go glamping in the UAE this weekend
These are the most lavish Valentine's Day packages in Dubai
What we know about the Zayed National Museum coming to Abu Dhabi
YOU SHOULD CHECK OUT
Our website uses cookies and other similar technologies to improve our site and your online experience. By continuing to use our website you consent to cookies being used. Read our privacy policy here.