Salvator Mundi will go on display alongside another of his masterpieces, La Belle Ferronnière.

Louvre Abu Dhabi has acquired yet another painting for its growing collection, and this one is particularly rare and sought after. Naturally, it’s also very expensive. 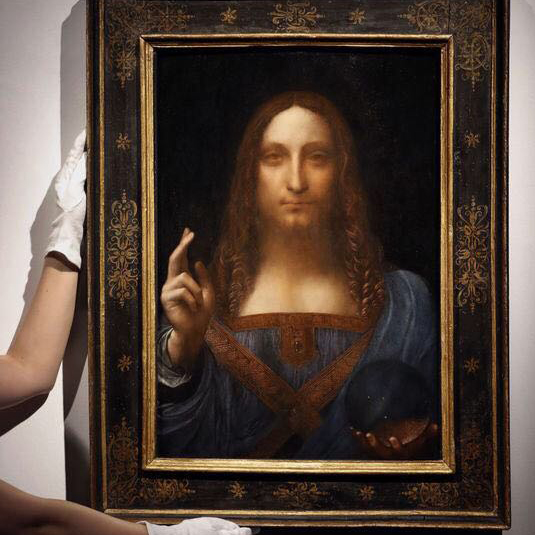 Salvator Mundi, by Italian master Leonardo da Vinci, dates back to around 1500 and is an oil-on-panel painting of a half-length figure of Jesus Christ as saviour of the world, dressed in lapis and crimson robes. In the painting, he’s holding a crystal orb in his left hand and is raising his right hand in benediction.

So, just how much is it worth? It sold for $450m at auction last month to The Abu Dhabi Department Of Culture And Tourism, according to auction house Christie’s in New York. That is more than 1.6 BILLION dirhams.

Christie’s confirmed the deal in a statement last week: “Christie’s can confirm that the Department Of Culture And Tourism, Abu Dhabi, is acquiring Salvator Mundi by Leonardo da Vinci. We are delighted to see that this remarkable painting will be available for public view at the Louvre Abu Dhabi.”

The painting is special for many reasons. Historians believe it was painted for Louis XII of France and Anne Of Brittany originally before it ended up in England in 1625 with Henrietta Maria and her husband Charles I Of England.

It was sold several times before it disappeared from records in around 1763, and was only discovered again when bought by British collector Francis Cook in 1900. It had been damaged by several restoration attempts and incredibly, it was mistakenly sold at auction in 1958 as a piece by da Vinci’s pupil Giovanni Antonio Boltraffio for a measly Dhs220.

Now, it’s officially the world’s most expensive painting and you can see it right here in the UAE capital.

Art
Culture
News
Things to do
EDITOR’S PICKS
Ain Dubai will open with fireworks, live music and a drone show
READ MORE
Incredible Aura SkyPool to open in Palm Tower this November
READ MORE
Brit Grand Slam hero Emma Raducanu confirmed for Mubadala Tennis
READ MORE
What’s On Nightlife Awards 2021: Here are the nominees...
READ MORE
MOST POPULAR
Free parking announced in Dubai on Thursday, October 21
Atlantis the Palm's Culinary Month is back with some amazing restaurants
7 fun spots to celebrate Halloween in Dubai with the family
The best places to watch the spectacular Ain Dubai fireworks show
This brunch serves up delicious Arabic dishes and non-stop captivating entertainment
YOU SHOULD CHECK OUT
Our website uses cookies and other similar technologies to improve our site and your online experience. By continuing to use our website you consent to cookies being used. Read our privacy policy here.