143 cars were used in this latest record attempt…

The UAE came out in full force over the weekend to celebrate its 46th National Day, and it could be argued that no one showed more patriotism than Dubai’s police force.

In between discounting traffic fines and generally keeping the peace, they also found the time to smash a Guinness World Record by forming the UAE flag in the shape of a giant smile emoji with the help of 143 cars.

In a video posted to social media you can see the level of coordination that went into pulling off the record attempt. The cars (many of them decked out in colourful National Day decals) were instructed to drive along designated lines so that not only did the massive emoji keep its shape, but it also appeared to be constantly moving when viewed from a birds-eye-view.

The stunt was filmed in cooperation with Global Village and the with the help of no less than 17 UAE motor clubs. Awatif Rashid Al Suwaidi, Executive Chairman of the Happiness Society and Positivity Council of Dubai Police, can be seen in the video saying that the she hopes that the record attempt will encourage young citizens and car lovers to take part in similar events in the future. 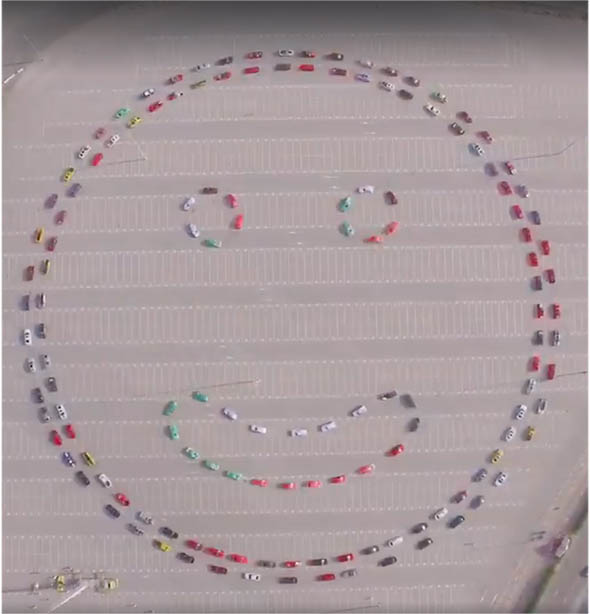 News
EDITOR’S PICKS
UAE holiday dates announced for Eid Al Adha
READ MORE
Emirates extends suspension of flights from India to UAE again
READ MORE
Coming soon: Everything we know about Ain Dubai so far
READ MORE
Khorfakkan set to open new tourist attraction 580 metres above sea level
READ MORE
MOST POPULAR
It's Dhs350 to brunch, stay and play at the What's On Lock In this weekend
A popular fairy-tale is gracing the stage at The Theatre at Mall of the Emirates in August
UAE petrol prices will increase again in August 2021
Exclusive interview: John Cena on his role as a 'douchey Captain America'
The stunning SLS Dubai hotel launches a luxe spa-cation
Pics of the week: Your best photos of the UAE
YOU SHOULD CHECK OUT
Our website uses cookies and other similar technologies to improve our site and your online experience. By continuing to use our website you consent to cookies being used. Read our privacy policy here.