News
Things to do
Well-being

Back in 1980, a Canadian teenager and cross-country runner who had lost his leg to cancer ran across Canada raising funds for cancer research. Every year since then, millions of people all around the world have run, cycled and walked to raise funds in his name, including here in Abu Dhabi. Here is the story of Terry Fox, and how you can get involved in raising funds in his name this month in the capital

Looking to get fit this year? One of the first events on the 2018 calendar in Abu Dhabi will burn calories and also raise funds for a good cause: registration has now opened for the annual Terry Fox Run, an 8.5km run along Abu Dhabi’s Corniche with one aim – to raise money for local cancer charities.

Now in its 24th year in the emirate, thousands of Abu Dhabians take part every year. You can run, walk, inline skate and even cycle along the route at an event that is just as much a celebration of Fox’s life as it is a chance to raise vital funds for those in need.

The run isn’t a race – the emphasis here is on fun. You’ll find the starting point near Khaleej Al Arabi Street and it ends near the Sheraton on the Corniche. Gates open at 7am, there’s a warm-up at 8am and the run starts proper at 9am. 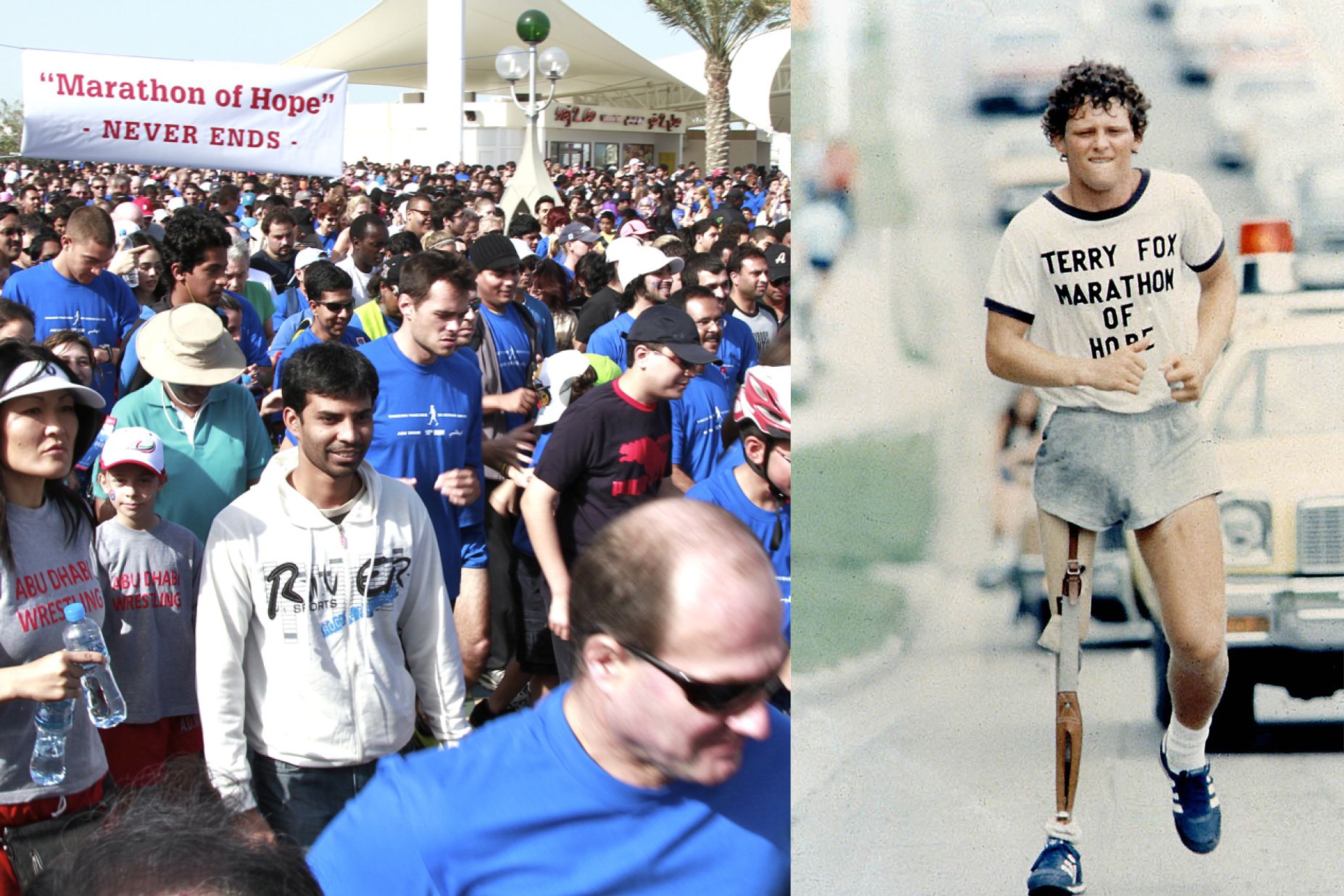 Terry Fox’s story is an incredible one. Born in Winnipeg in 1958, he was diagnosed with cancer in 1977 – he had a malignant tumour in his right leg, which had to be amputated from six inches above the knee. But Fox didn’t give up on life just because he’d lost a limb. In February of 1979, he decided he was going to run a marathon to raise money for cancer research and awareness. But this was to be a very special kind of marathon – Fox decided he would run from one side of Canada to the other. In February 1979 until April 1980, he ran 5,000km with an artificial leg in preparation for his big event.

Disaster struck though on September 1, 1980. After 143 days and 5,373km, Fox was forced to abandon his run in Thunder Bay, Ontario because his primary cancer had spread to his lungs. Fox tragically passed away in June of 1981, but he didn’t die in vain – the following September, the first Terry Fox Run took place at a phenomenal 760 sites in Canada and all over the world and raised $3.5million. Since then, the Terry Fox Foundation has gone on to raise $715million in the fight against cancer in almost 25 countries.

News
Things to do
Well-being
EDITOR’S PICKS
What’s On Nightlife Awards 2021: Here are the nominees...
READ MORE
It's back! What's On Lock In returns to Media One Hotel
READ MORE
Arts and culture: 5 spots we can't wait to visit at Expo 2020 Dubai
READ MORE
UAE petrol prices are set to decrease in September 2021
READ MORE
MOST POPULAR
Pics of the week: Your best photos of the UAE
How to use Playkey.me, the region's first supercharged cloud gaming service
The Mai Dubai half marathon is back in October
Exhibitions, workshops and more to experience at Sharjah Art Foundation
New Irish pub McCafferty's opens second venue in Dubai
YOU SHOULD CHECK OUT
Our website uses cookies and other similar technologies to improve our site and your online experience. By continuing to use our website you consent to cookies being used. Read our privacy policy here.