24 reasons why this year is going to be awesome in the emirate, including Warner Bros World Abu Dhabi, the Abu Dhabi Festival, Fifth Harmony in concert, Clymb, the return of the Abu Dhabi Tour and gigantic freakshakes at the capital’s first branch of Black Tap 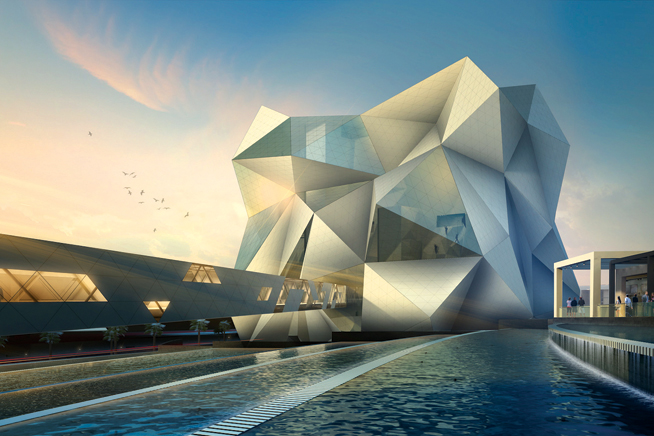 Geared towards adrenaline junkies, Clymb at Yas Mall will feature the world’s tallest indoor climbing wall (43 metres – the height of 22 camels stacked on top of each other) and the widest skydiving chambers (9.75 metres wide). The climbing walls are aimed at all levels, from beginners to experts, and will have four walls of varying degrees of difficulty.  We’re still waiting for its 2018 launch date.
yasisland.ae 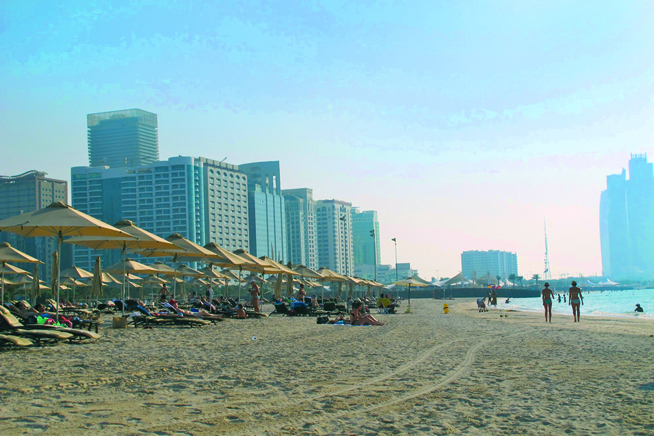 Opening in March 2018, this new park on Abu Dhabi’s Corniche is perfect for all the family. You’ll be able to watch movies under the stars, stay cool in the water park, or relax and dine at a range of shops and restaurants. There are also outdoor sports grounds and Segways, bikes and boats available for hire.
visitabudhabi.ae 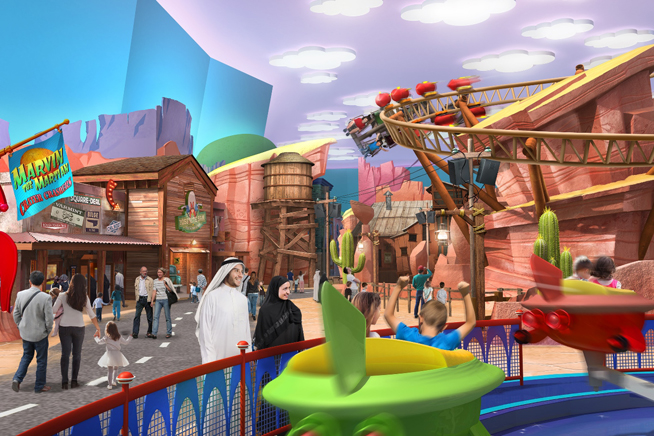 Opening on Yas Island, inside you’ll find 29 thrilling rides to try. There will be interactive family-friendly attractions and a plaza area reminiscent of old Hollywood, as well as retail outlets and restaurants. The park will have six areas including DC Comics cities Metropolis and Gotham. The latter, of course, isn’t just home to the Bat – get ready to get scared witless by super-villains such as The Joker. There’s also Cartoon Junction, which will be home to Hanna Barbera favourites such as Scooby-Doo and Shaggy and their iconic van The Mystery Machine.
yasisland.ae 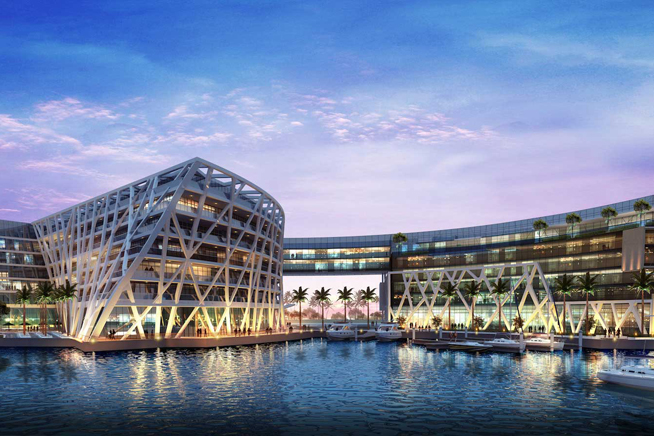 Set to launch towards the end of this year, this plush spot is located on the waterfront of Al Bateen and will have 198 guest rooms and 57 exclusively serviced residences. It will also have two restaurants, a gourmet market, lobby bar, pool bar and a three-storey nightclub.
editionhotels.com 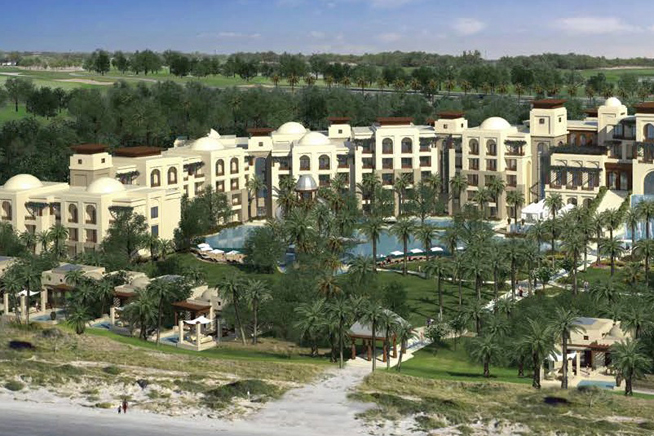 Located on a nine-kilometre beach on Saadiyat Island, this five-star hotel will have 354 rooms plus 13 private villas, a number of restaurants, conference facilities, a spa, and Bodylines health and fitness club.
rotana.com 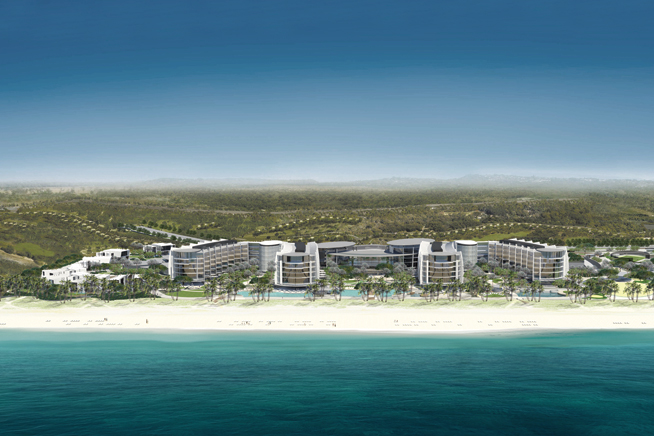 Yes, Saadiyat is getting two new hotels this year. The five-star property will have 294 rooms, including spa suites, presidential suites and private high-end villas. Food and beverage outlets will include an all-day dining venue, two signature restaurants, a lobby lounge and bar, pool and beach bars, retail shops, and outdoor beach and pool areas.
jumeirah.com 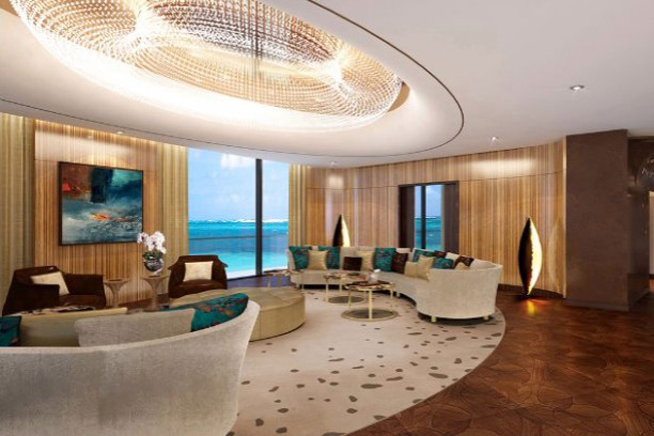 Situated in the West Corniche district of Abu Dhabi, opposite Emirates Palace, this new five-star hotel has 428 rooms, 36 suites, and eight penthouses in addition to four restaurants, a lounge, two bars, a spa and fitness centre.
abudhabi.grand.hyatt.com 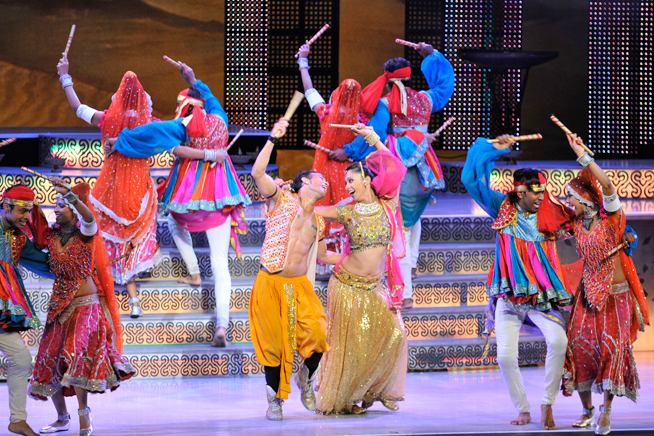 The 2018 edition of Admaf is the 15th, and will be involved in the celebrations of the Year Of Zayed, a series of events marking the Ascension Day of the late founding father of the UAE. The Country Of Honour this time around is India. Performers during the festival include violinist Nicola Benedetti and the UK’s Orchestra Of The Age Of Enlightenment, and you can also see the world premiere of Emirati composer Ihab Darwish’s Waves Of My Life performed by the Beethoven Academy Orchestra and conducted by Stoyan Stoyanov, and a performance of theatrical dance show The Merchants Of Bollywood (above).
March 8 to 30
800tickets.com/abudhabifestival

One Louvre To Another: Opening A Museum For Everyone 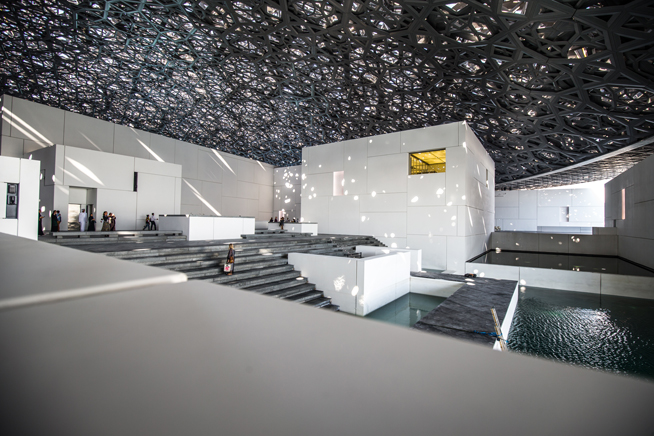 The inaugural special exhibition at Louvre Abu Dhabi traces the history of Musée du Louvre in Paris and will run throughout the first quarter of 2018. It will feature around 145 works of art.
January to April
Louvre Abu Dhabi, Saadiyat Island, Abu Dhabi. Tel: (600) 565566. Taxi: Louvre Abu Dhabi. louvreabudhabi.ae 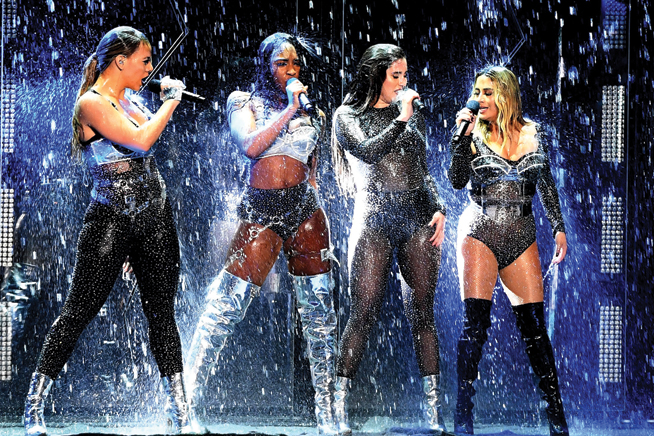 Photo credit: Getty Images
The super girl group may have lost Camila Cabello but fret not, Harmonisers, because the quartet – featuring remaining members Ally Brooke, Normani Kordei, Dinah Jane and Lauren Jauregui – are bringing their chart-topping pop materials such as Work From Home and Down for a night of dancing and singing to the capital.
March 16
du Forum, Yas Island, Abu Dhabi. Tel: (02) 5098142. Taxi: du Forum. ticketmaster.ae 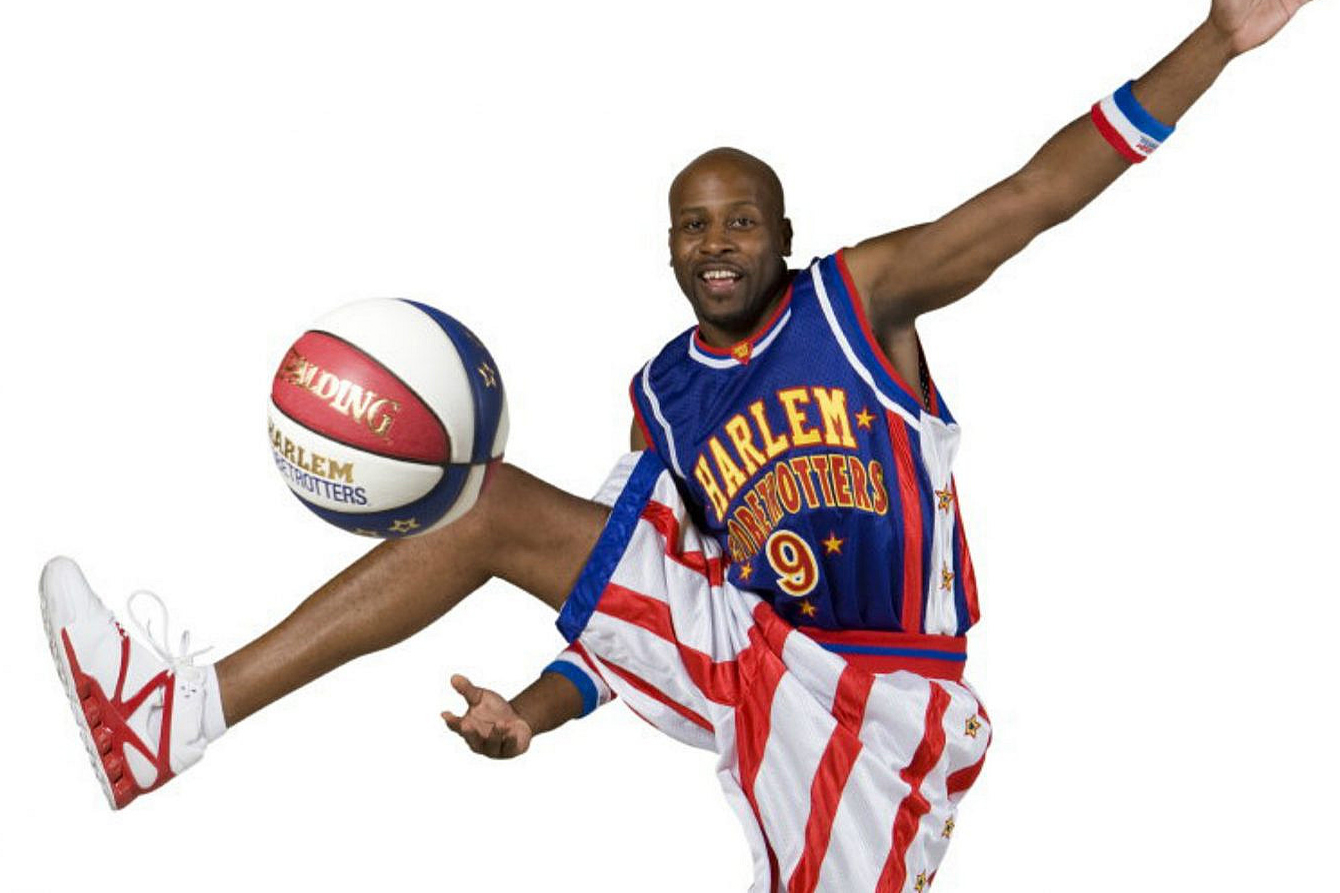 Founded in Chicago in the 1920s, the Harlem Globetrotters have played more than 26,000 exhibition matches in 122 countries – and when the basketball team take the floor in Abu Dhabi, it’s sure to be a spectacle for all ages. Families will have a blast watching them perform their incredible tricks such as shooting from mid-court and spinning balls on their fingers.
March 30 and 31
du Forum, Yas Island, Abu Dhabi. Tel: (02) 5098142. Taxi: du Forum. yasisland.ae 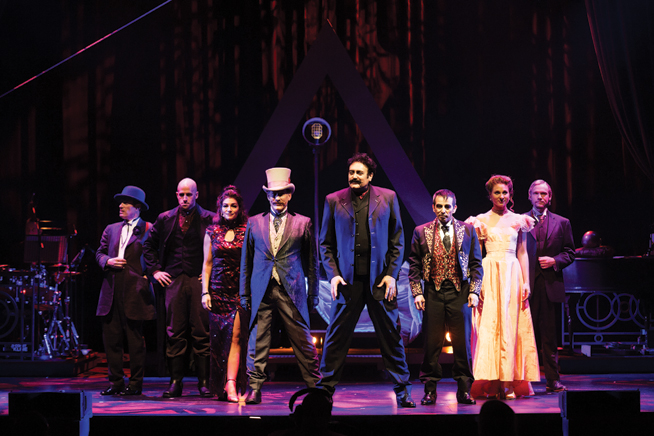 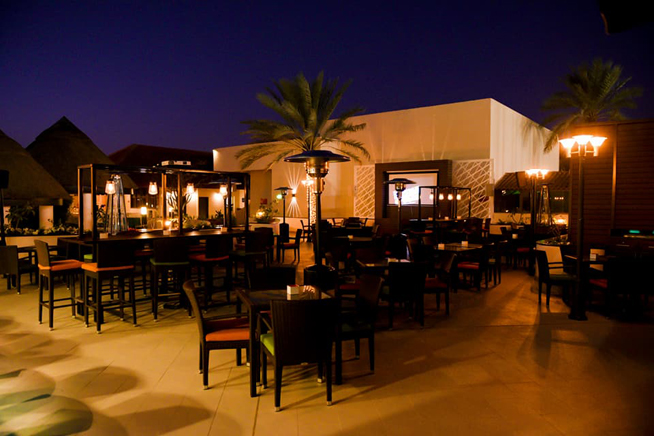 Located at the Danat Al Ain Resort, the new McGettigan’s is designed just like its sister bar in Abu Dhabi with the addition of a huge terrace overlooking the hotel’s pool. It has 12 large screens showing sport, a menu featuring classic Irish dishes, and a daily happy hour. It’s already open.
mcgettigans.com 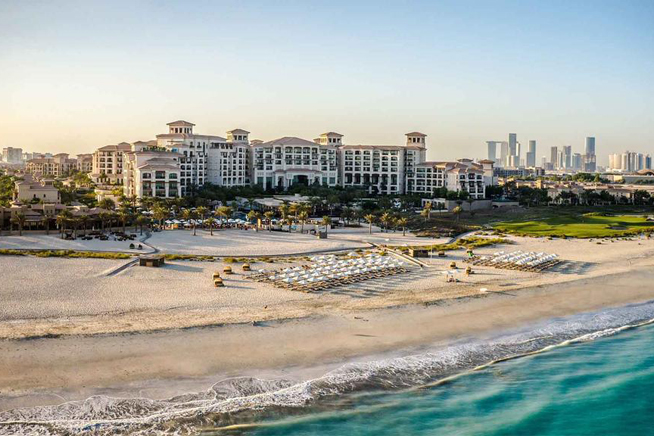 Buddha-Bars around the world are famous for their food menus that blend Japanese, Thai and other Asian flavours, and now the international lounge brand is bringing its beach concept to St Regis Saadiyat Island Resort.The exotic venue will offer signature sounds and food in a stunning setting with world-class beach and pool facilities. An official date has not been released (it was meant to open last October) but it’s tipped to open in the coming months.
buddhabar.com 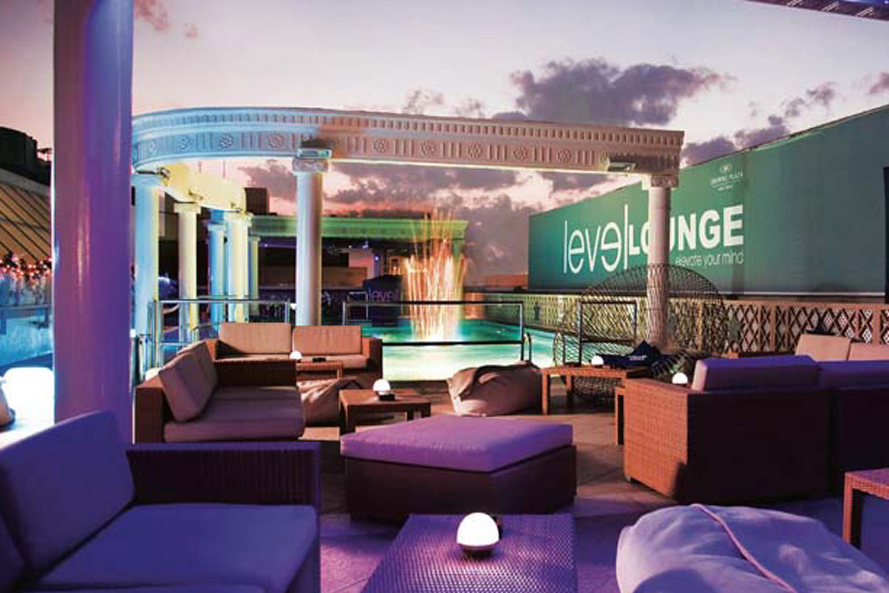 The rooftop bar in Crowne Plaza Abu Dhabi is getting revamped and will be covered in glass so that it can be open 365 days a year. For the first time, it also gets its own menu and will serve shisha. It’s expected to re-open in January.
ihg.com 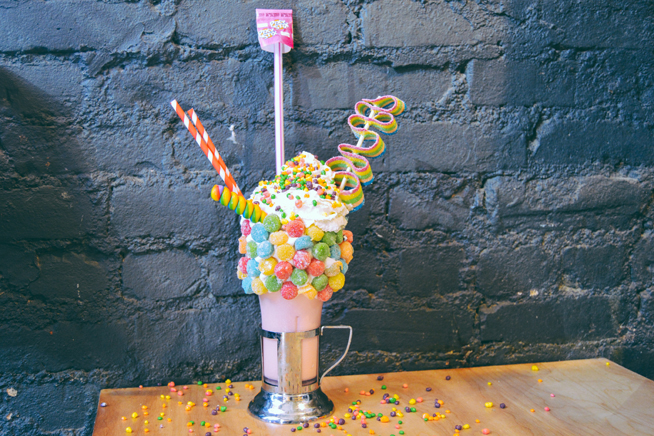 A massively popular outlet up the road in Dubai, thanks to its craft burgers and huge freakshakes. Originally from New York, it’s set to open this year in Yas Mall. Flavours such as a pear bacon jam burger and the sour power black cherry shake (vanilla frosted rim with sour gummi poppers topped with a pixy stix, rainbow pop, sour skewer, whipped cream and Nerds) means it should be an instant hit with the capital’s foodies.
blacktapme.com 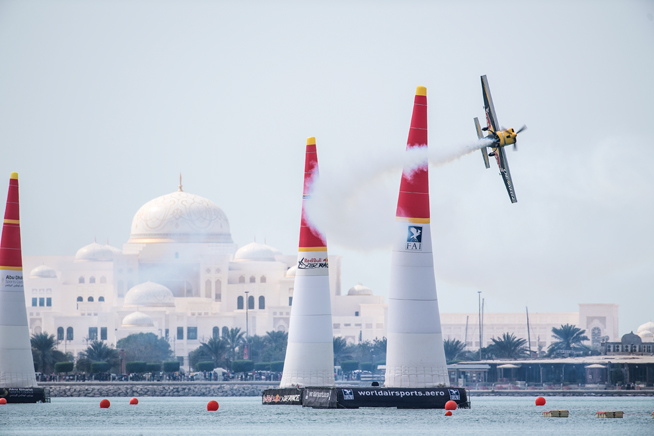 Abu Dhabi will once again host the Red Bull Air Race and set the scene as the action-packed season opener for a brand new World Championship. The race will take place at Abu Dhabi Corniche and fans will be able to witness all the action from either a premium Sky Lounge or in the relaxed atmosphere
of the Hiltonia Beach Club.
February 2 and 3
airrace.redbull.com 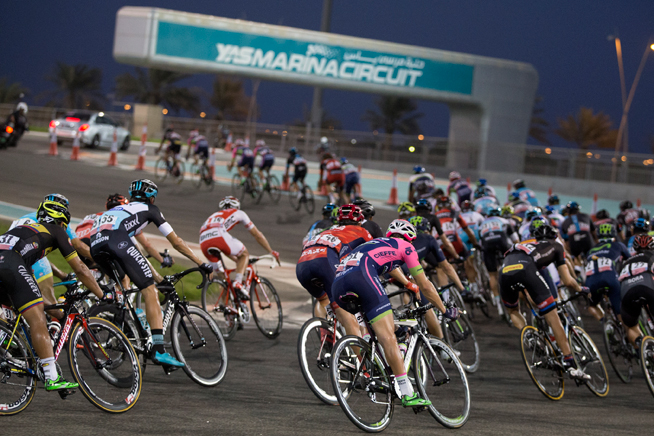 The fourth edition of cycling’s Abu Dhabi Tour will be held from Wednesday February 21 to Sunday February 25. Usually, the race features a number of flat stages and one mountain stage, and Rui Costa from UAE Team Emirates is the current title holder having won the summit finish on Jebel Hafeet after a 10.8km ascent in 2017. There are rumours the 2018 edition will feature new stages and five days of racing, instead of four.
February 21 to 25
abudhabitour.com 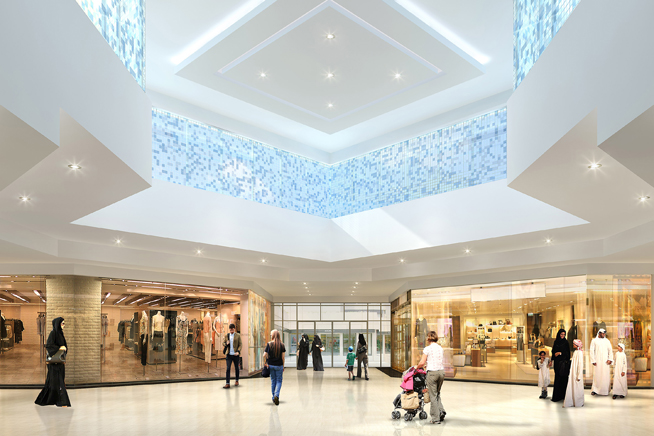 With more than 60 outlets, including a Magic Planet family entertainment centre, a range of dining options, a Carrefour and a City Centre healthcare clinic, this eco-friendly mall will be convenient for those living and working in Masdar and Khalifa cities.
majidalfuttaim.com 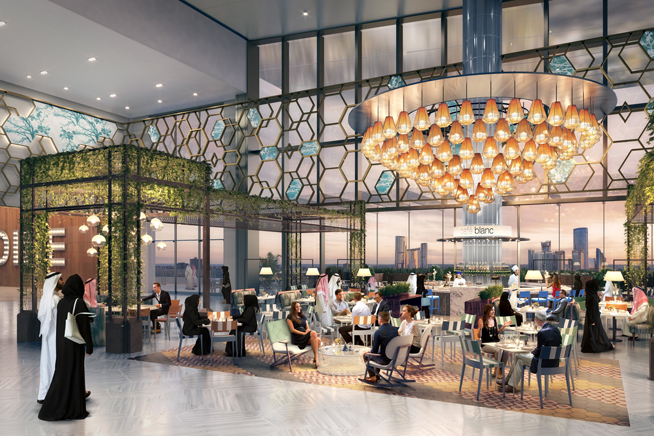 Featuring the first Bloomingdale’s in Abu Dhabi and the first Macy’s outside of the USA, plus more than 400 shops, Al Maryah Central will be open by the end of 2018. The mall will include a 21-screen Vox Cinema with Imax, two new concepts called Family World and Adventure Park, and more than 100 restaurants, some of which will make up Central Kitchens, an area consisting of five dining districts called The Living Room, The Study, The Garden Kitchen, The Courtyard and The Patio.
almaryahcentral.ae 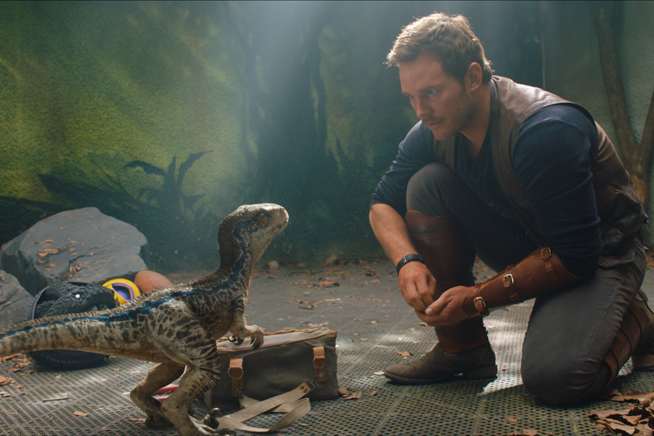 Photo credit: Universal Pictures
The plot has yet to be revealed on this one but with the return of Chris Pratt plus two new terrifying dinosaurs, it can only be a mega summer blockbuster. What’s more, Jeff Goldblum is back (he played Dr Ian Malcolm in the original movie).
In cinemas June 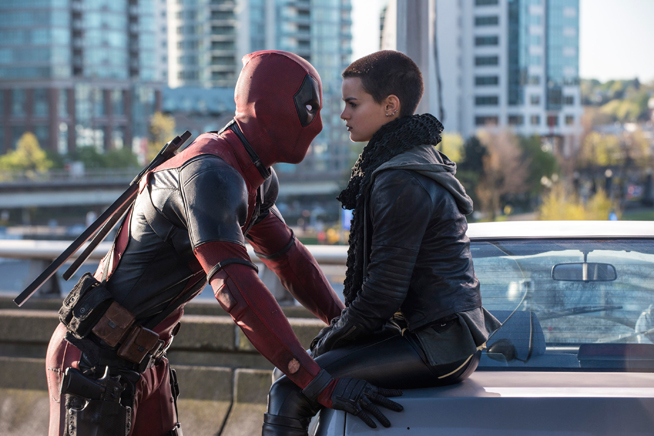 Photo credit: 20th Century Fox
Thanks to the commercial success of the first Deadpool movie, the R-rated superhero sequel is set to hit cinemas this summer, and is already causing a social media stir thanks to some surreal albeit vague teaser trailers. Josh Brolin co-stars with Ryan Reynolds as mutant hero Cable (and he’s set to continue playing the character in future X-Men movies as well).
In cinemas June 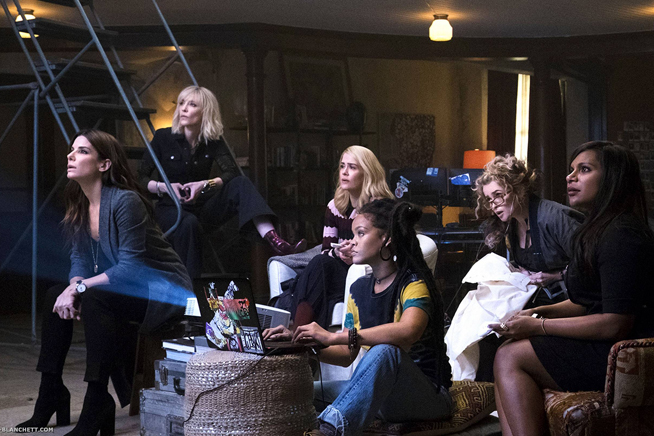 
Another spin-off movie from a galaxy far, far away, this one is set prior to the events of the original 1977 film A New Hope. The plot follows a young Han Solo and his adventures with Chewbacca and their early encounters with Lando Calrissian. Directed by Ron Howard (who came on board after the original directors were fired), young actor Alden Ehrenreich is the man who has to reprise the role made famous by Harrison Ford. No pressure, then.
In cinemas May

News
Things to do
EDITOR’S PICKS
What’s On Nightlife Awards 2021: Here are the nominees...
READ MORE
It's back! What's On Lock In returns to Media One Hotel
READ MORE
Arts and culture: 5 spots we can't wait to visit at Expo 2020 Dubai
READ MORE
UAE petrol prices are set to decrease in September 2021
READ MORE
MOST POPULAR
Abu Dhabi: Wristband no longer required for most home quarantine
As of September 19, PCR test not required to enter Abu Dhabi from UAE
This new family-friendly brunch includes free cinema tickets
Pics of the week: Your best photos of the UAE
How to use Playkey.me, the region's first supercharged cloud gaming service
YOU SHOULD CHECK OUT
Our website uses cookies and other similar technologies to improve our site and your online experience. By continuing to use our website you consent to cookies being used. Read our privacy policy here.