Al Fattan Currency House. It hardly rolls off the tongue as a dining destination, does it? It’s also not fared well with the restaurants who’ve taken up residence inside it. Both Greg Malouf’s Cle restaurant and R Trader couldn’t get enough bums on seats.

But if anyone can draw a crowd, surely Flavio Briatore is the man to do it. The F1 businessman-turned-restauranteur has brought over Crazy Fish from Monte Carlo. He’s also bought next door and opened Beefbar.

Crazy Fish is the smaller of the two spaces, and another high-end seafood restaurant hoping to make waves in the city.

Crazy Fish is an intimate space that’s laid out like a formal fine dining room with white tablecloths and cabinets of crystal cut glass, but with a contemporary twist thanks to the colourful artworks, blue leathers, and the addition of a fresh fish bar where you can select your catch, which is brought fresh to the restaurant. 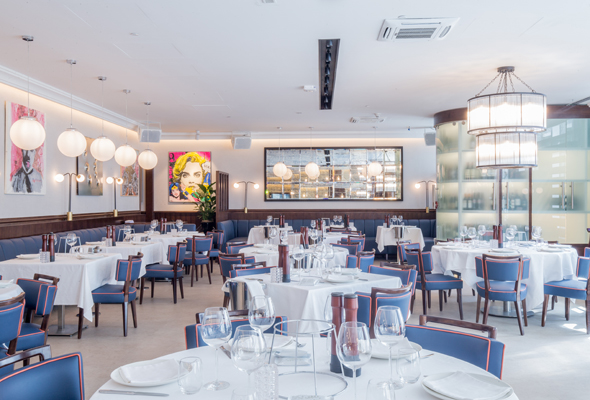 We start with tarburish oysters (Dhs30 per piece). They’re fresh and supersized and we delight in drizzling them in lemon, savouring the simple flavours.

Continuing the theme of raw eats, we order the red king prawn tartare (Dhs60) and seabass tartare with avocado and lime (Dhs70). The prawn tartare is thin slithers of king prawn that similarly goes down the throat with delicious ease, while the diced tuna tartare and avocado is a combination we’re sure we’ll never tire of. 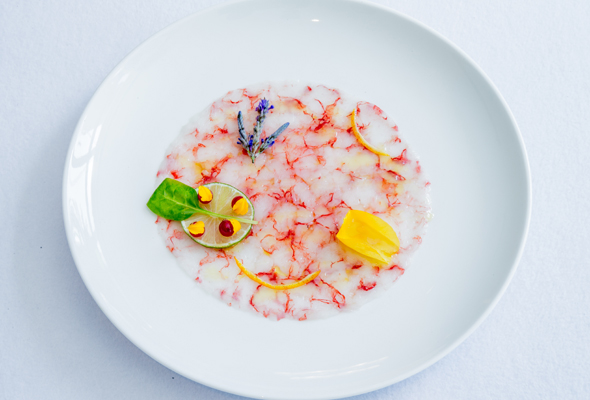 The meal arguably peaked there, as our mains slightly divided opinion: the gnocchetti with red king prawns, cherry tomatoes and pecorino cheese (Dhs120) was hearty and the pasta perfectly cooked, but tasted too salty for some and we were craving the sweetness of the cherry tomatoes to come through.

Similarly, the spaghetti with clams (Dhs110) clearly used the freshest of ingredients, but it felt a tad over-seasoned.

Despite its fine-dining feel, Crazy Fish isn’t overcomplicated – and that’s a good thing. Instead, it favours simple flavours and lets the quality of its ingredients do the talking.

Eat & Drink
EDITOR’S PICKS
13 Sheikh Hamdan-approved restaurants in Dubai
READ MORE
Dubai brunches temporarily banned in new preventative measures
READ MORE
12 upcoming Dubai mega-projects we can't wait for
READ MORE
16 of the best beach bars in Dubai for sundowners
READ MORE
MOST POPULAR
Ladies, here's how you can win a chance to showcase your talent at Radisson Red
Dubai influencers must now declare free gifts to UAE tax authority
Wit woo: Check out Boomah, Abu Dhabi's first owl cafe
This stunning new restaurant brings Australia to Dubai
There's a dry night in Dubai coming up this week
YOU SHOULD CHECK OUT
Our website uses cookies and other similar technologies to improve our site and your online experience. By continuing to use our website you consent to cookies being used. Read our privacy policy here.