Yes, you read that right…

Heads up, we didn’t see this one coming.

Electronic duo Tale of Us are set to make their UAE debut at Blue Marlin Ibiza this weekend. But as well as bringing their emotional electronic sound to the shores of Blue Marlin, the Berlin-based duo are hosting an after-party at another venue, none other than the recently opened QE2 ship.

The legendary ship, which has just opened in Dubai as a floating hotel, is the location for the official after-party at mysterious venue, The Hatch. Although few details have been released, a Facebook event page advertises that the only way to gain entry to the after-party is by collecting a wrist band from Blue Marlin. 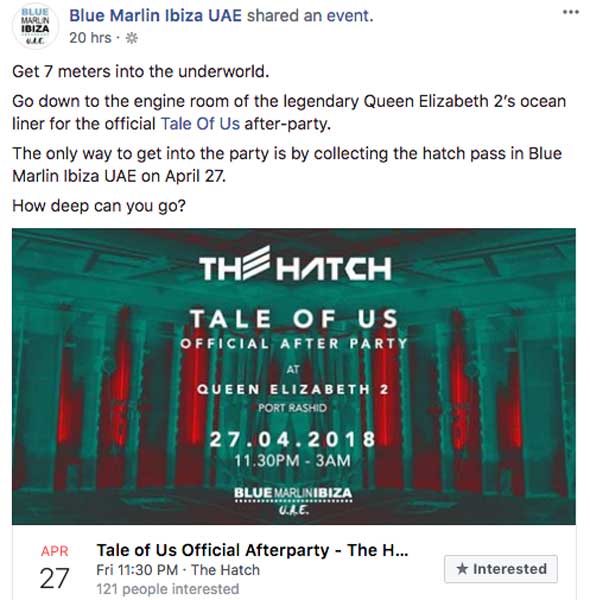 We can’t help but think this one is a bit random, considering it’s a pretty long drive from Blue Marlin’s Ghantoot shores to the seas of the QE2 over in Port Rashid.

So where exactly is The Hatch?

Well, described as ‘7 metres into the underworld’ (we reckon that might be 7 metres below sea level), the mysterious club is apparently located in the engine room of the legendary ocean liner.

An EDM after-party in an engine room of an iconic cruise ship? That’s got to be a first…

Clubs
Nightlife
EDITOR’S PICKS
UAE holiday dates announced for Eid Al Adha
READ MORE
Another update: Emirates extends suspension of flights from India to UAE
READ MORE
Coming soon: Everything we know about Ain Dubai so far
READ MORE
Khorfakkan set to open new tourist attraction 580 metres above sea level
READ MORE
MOST POPULAR
It's Dhs350 to brunch, stay and play at the What's On Lock In this weekend
Abu Dhabi Green list updates: 20 changes to the quarantine free travel list
Barasti revamps its summer tent with stellar daily drinks deals
Enjoy dinner and a show 68 floors high in Dubai
New films to watch in cinemas this week: July 29 to August 4
16 Abu Dhabi pool pass deals that are so hot, they're cool
YOU SHOULD CHECK OUT
Our website uses cookies and other similar technologies to improve our site and your online experience. By continuing to use our website you consent to cookies being used. Read our privacy policy here.