Known as the UK’s most prestigious horse race, the Epsom Derby took place over the weekend. And among the jubilant racegoers was HH Sheikh Mohammed bin Rashid Al Maktoum, Vice President and Prime Minister of the UAE and ruler of Dubai.

And the Dubai ruler had more reason to celebrate than most, as Masar from his Godolphin stables finished first at the 239th annual race. Ridden by jockey William Buck, Masar started from six horses back at the start of the race, coming through to successfully finish first.

Joined by his wife, HRH Princess Haya, son HH Sheikh Hamdan and 10-year-old daughter Sheikha Al Jalila, the Dubai royal family were in the UK to see Godolphin’s Masar ride to victory, with HH Sheikh Hamdan posting this video of their win to his Instagram page:

But as well as celebrating their impressive win, the Dubai royal family were also spotted meeting with another royal, British Monarch Queen Elizabeth II, on the sidelines of the show. 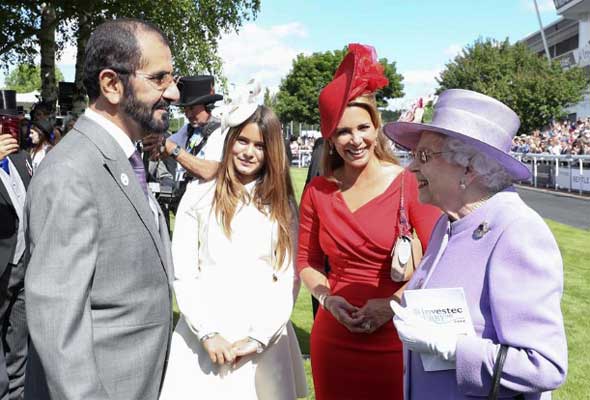 According to Sheikh Mohammed’s official website, the meeting discussed building on the successful bilateral relations between the United Arab Emirates and the United Kingdom in all sectors. Though considering their mutual love of horses, we reckon the two royals had plenty of race-related conversation too.

Horses are in my blood, horses are my life… pic.twitter.com/RommBMi1sv

“This a big race and there is always something special about it. My daughter is here and the horse came from Dubai,” said Sheikh Mohammed after the race. “I’m very happy. Horses are in my blood. I love horses, and I love racing”, he added in the video, which he shared to Twitter.