They’ve been amazing the world with their jaw-dropping stunts for over four years now, and we still can’t get enough of Jetman Dubai…

The brand behind the first man in history to independently fly using a jet-engine powered carbon fibre wing is back. Together with action sports brand XDubai, they have released a new trailer that touches upon the next chapter of the Jetman story.

Released yesterday on XDubai’s YouTube channel, the 4-minute trailer for upcoming documentary, LOFT: The Jetman Story, shows a Jetman Dubai pilot launching from the ground, and a mountain top in Hellesylt, Norway, an extraordinary feat for the carbon-fibre winged pilots and an impressive progression from Jetman Dubai’s earlier helicopter launches. 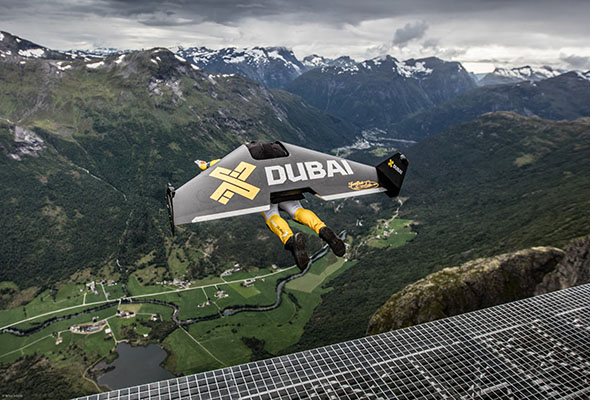 The teaser is the first hint of the progression of the Jetman Dubai and XDubai partnership since the two brands joined forces to make global headlines in 2015 with the world’s first twin Jetman formation of Rossy and Reffet over the skies of Dubai; an accomplishment which was then followed by another jaw-dropping feat that saw Rossy and Reffet fly alongside an Emirates Airline A380 later that same year.

The documentary, set to be revealed soon, were the result of extensive planning and preparation between Jetman Dubai, XDubai and various experts from across the globe and on the ground. Currently in production, the documentary is directed by Anthony August, an American film director, writer and producer who has been working with Dubai Film and Jetman Dubai since 2013.

If you haven’t already, check out the Jetman Dubai Instagram for some truly epic shots of these daredevils in action. Otherwise keep an eye out for a brand new Jetman Dubai website, launching in 2019.