A new Greek restaurant is opening in Souk Madinat Jumeirah

It will occupy the spot previously housed by Left Bank…

Greek food is seriously having a moment in Dubai with openings such as Gaia and Opa adding to a sea of popular Greek eateries in the city. And one more is set to join their ranks, as Taverna is opening in Souk Madinat Jumeirah.

The 100-seater restaurant is a homegrown concept, and will replace Left Bank, which closed its doors in the Madinat earlier this year.

Although an exact date has not been announced, it’s likely to open at the end of February.

Food Fund International (FFI), the hospitality company behind Taverna are promising ‘a relaxed atmosphere with awe-inspiring views of the Burj Al Arab’, so we can’t wait to check it out when it opens. 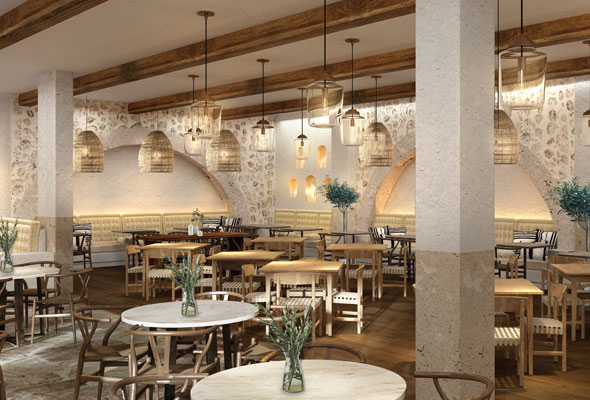 ALSO READ: 11 new restaurants to check out in Dubai this month

As well as an indoor restaurant, the new venue will also have a dedicated bar and large outdoor terrace, which looks out onto the Madinat waterways.

On the menu, expect authentic Greek dishes, with a special focus on seafood. Guests will be able to choose their catch of the day from a fresh seafood display, or make their way through the traditional taverna a la carte menu.

It’s one of two new openings that FFI will bring to Souk Madinat Jumeirah. Another concept, which is still yet to be announced, will take over the site which was previously occupied by Japengo cafe.

They’re already behind Madinat restaurant The Meat Co, which can also be found in Souk Al Bahar, bringing FFI’s total to three Madinat Jumeirah restaurants by the end of 2019.

Eat & Drink
Restaurants
EDITOR’S PICKS
So, when is the next UAE public holiday in 2021?
READ MORE
All of the lavish new hotels set to open in Dubai in 2021
READ MORE
16 of the best pool passes in Dubai that are fully redeemable
READ MORE
All of the restaurants at West Beach, Palm Jumeirah
READ MORE
MOST POPULAR
Brunch is back: 9 of the best brunches to book this weekend
Abu Dhabi Golf Club now has a Golden Night pool pass deal
Dubai bars reopen for vaccinated residents, brunches can resume
Get your heart pumping at this brand-new Fitness First club
Here's where you'll find some of the most breathtaking views of Dubai
YOU SHOULD CHECK OUT
Our website uses cookies and other similar technologies to improve our site and your online experience. By continuing to use our website you consent to cookies being used. Read our privacy policy here.