50 Cent to perform at Base Dubai this January

You’ll find him ‘In Da Club’ this January…

He’s known as one of the best selling rappers of all time and 50 Cent is now heading back ‘In Da Club’, returning to Base Dubai later this month.

50 Cent will headline Base’s weekly ‘Base on Friday’ night on Friday January 18.

The American rapper was part of a stellar opening line-up at the d3 super club Base back in April 2017. Since then Base has welcomed megastars including David Guetta, Jason Derulo and Rita Ora. 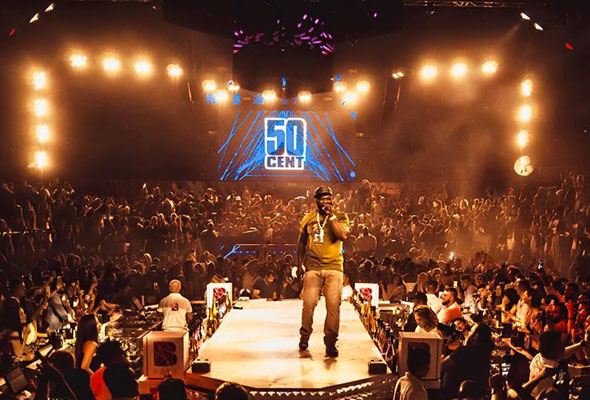 ALSO READ: Ibiza’s The Zoo Project is coming to Dubai this January

50 Cent, real name Curtis Jackson, is expected to treat Dubai fans to chart-topping hits like “In Da Club”, “I’m The Man”, and “Candy Shop”. The music mogul has sold more than 22 million albums worldwide, making him one of the best-selling rappers of all time.

Doors open at 10pm and guests are advised to arrive early, as it’s sure to be a sellout.

Nightlife
EDITOR’S PICKS
13 Sheikh Hamdan-approved restaurants in Dubai
READ MORE
Dubai brunches temporarily banned in new preventative measures
READ MORE
12 upcoming Dubai mega-projects we can't wait for
READ MORE
16 of the best beach bars in Dubai for sundowners
READ MORE
MOST POPULAR
Breaking: Dubai extends preventative measures until mid-April 2021
Enjoy brunch, breakfast and a stay at Westin Abu Dhabi from Dhs432
Get a free gym class at this cool new Dubai gym
Pics of the week: Your best photos of the UAE
Emirates Airlines and DHA to implement digital verification of traveller medical records
YOU SHOULD CHECK OUT
Our website uses cookies and other similar technologies to improve our site and your online experience. By continuing to use our website you consent to cookies being used. Read our privacy policy here.