Brit boyband Busted just released a song all about Dubai

Any guesses where ‘Shipwrecked in Atlantis’ was filmed?

Dubai has served as the backdrop to many films in its time with Jackie Chan, Pierce Brosnan and Ryan Reynolds all having recently flown in to shoot movie scenes in the UAE. But it’s been less popular as a location for music videos – until now that is.

Brit boyband Busted were recently in the city to perform at The Irish Village, but made no secret of the fact that they were filming while in the city. And now the Year 3000 hitmakers have just unveiled the video for new single, Shipwrecked in Atlantis.

The song – all about washing up on the shores of Dubai and getting ‘shipwrecked in Atlantis’ – was unsurprisingly shot at Atlantis, The Palm. During the video the boyband, made up of Charlie Simpson, Matt Willis and James Bourne, are seen taking to the slides at Aquaventure water park, gaming at the brilliant new Wavehouse, and heading underwater at the Lost Chambers Aquarium.

Elsewhere in the video, the three-piece also share clips from their gig at The Irish Village, and reference ‘dining at Salt Bae every night’. Sounds like a dream Dubai trip to us.

You can check out the full video here. 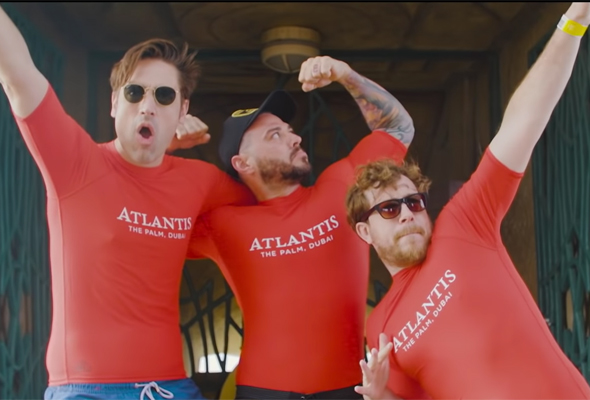 The song has been released just as Busted head off on their Half Way There UK tour, which will see them play at venues including Wembeley, Manchester Arena and the O2 in Newcastle.

The band first got together in 2000 racking up a string of top-10 hits and two Brit awards, but split in 2005 to pursue their own projects. The full band reformed in 2015 and have since been touring and working on new music together ever since.