A brand new attraction is set to open its doors in Dubai soon, as the city welcomes its first 3D Trick Art museum, with the grand opening due for the first week in October.

Spread over 23,000 square feet, 3D world Dubai is tbe the largest of its kind in the world. It’s located just off Sheikh Zayed Road, near the Noor Islamic Metro Station (close to Oasis Mall).

With 185 hand-painted artworks from artists around the globe, there’s 9 different themed ‘zones’. They include Fantasy Land, Water World and Animal Kingdom and 3D World Dubai invites visitors to step inside the art and become part of the worlds they’ve created.

All you need is you and your phone to snap some seriously wow-worthy pics. 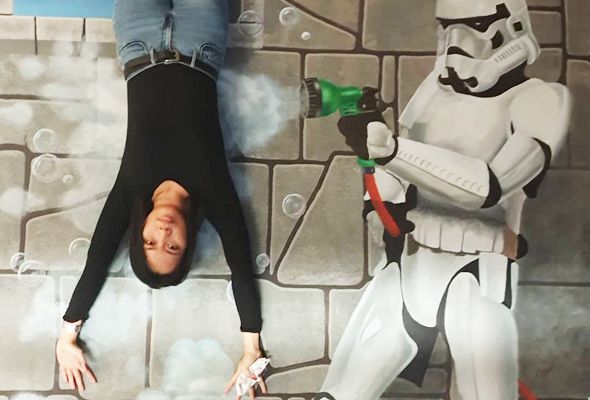 There will be nine zones to immerse yourself in, each with a different theme: Illusion, Arabic, Egyptian, Water World, Animal Kingdom, World of Masterpieces, Fantasy, Forest and Humour.

You’ll get some serious material for the ‘Gram as you become part of the art – getting your own angel wings, entering a little gingerbread house or even getting hosed down by a Storm Trooper.

The project has been seven years in the making, and is the brainchild of a husband and wife Raman Ticku and Schakun Singh, who were first inspired by a trick-art museum in the Phuket on a family vacation and have been building the idea ever since.

From flying on a magic carpet in Arabia to walking over nails in Egypt or running from an elephant in the animal kingdom, you’ll become part of some worlds you know, and some, you’ve only ever dreamed of.

It’s the perfect day out for the whole family…

Art
Culture
Things to do
EDITOR’S PICKS
What’s On Nightlife Awards 2021: Here are the nominees...
READ MORE
It's back! What's On Lock In returns to Media One Hotel
READ MORE
Arts and culture: 5 spots we can't wait to visit at Expo 2020 Dubai
READ MORE
UAE petrol prices are set to decrease in September 2021
READ MORE
MOST POPULAR
7 awesome things to do in Abu Dhabi this weekend: Sep 23 to 25
10 awesome things to do in Dubai this weekend: September 23 to 25
White Dubai to reopen as a dining and entertainment lounge
Review: The special 20 year anniversary menu at Hakkasan Abu Dhabi
See Andrea Bocelli perform live when he returns to Dubai in November
YOU SHOULD CHECK OUT
Our website uses cookies and other similar technologies to improve our site and your online experience. By continuing to use our website you consent to cookies being used. Read our privacy policy here.