Did you want to get your hands on tickets to Red Hot Chili Peppers in Abu Dhabi this September? Well, act fact as pre-sale tickets are now on sale.

Tickets for the gig at The Arena, Yas Island on Wednesday September 4 are priced from Dhs250.

For the moment, only those who pre-registered for tickets have access, using the code provided via email. But, general tickets will go on sale at 12pm tomorrow, Tuesday July 30.

There are six different ticket categories, ranging from Category 4 tickets at the far back of the stage, priced at Dhs250, up to Platinum tickets right at the front, which are Dhs995.

Here’s a map of the venue to help you decide which tickets to buy: 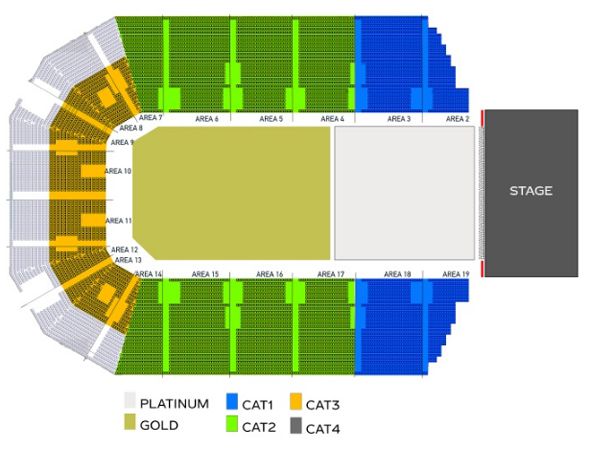 ALSO READ: All the artist set to perform in the UAE this year

The Red Hot Chili Peppers will play in Abu Dhabi as part of ‘Showdown Week’, which will run from September 1 to 7. The week-long schedule will see city-wide events and activations take place including pool and beach parties, shopping and restaurant deals.

A second artist will also be part of the line-up, and will take to the stage on September 5, so stay tuned for another artist announcement soon.

UFC 242 is set to be one of the most exciting matches in the MMA calendar when it takes place in just under six weeks time. The reigning UFC lightweight world champion Khabib Nurmagomedov will battle interim champ Dustin Poirier in the title unification bout at the currently under construction arena on Yas Island.

Nightlife
EDITOR’S PICKS
Here's the full list of UAE public holidays in 2023
READ MORE
23 incredible things to look forward to in the UAE in 2023
READ MORE
Hidden gems: 10 UAE desert pop-ups to discover this winter
READ MORE
Where to travel in 2023: 10 new flight routes from the UAE
READ MORE
MOST POPULAR
26 of Dubai's best beachfront restaurants
8 wonderful things to do in Dubai this week: Feb 6 to 9
Where to go to get your Al Baik fix in the UAE
Reset and recharge with a relaxing staycation at this stunning Dubai hotel
The most expensive apartment in Dubai just sold for Dhs410 million
YOU SHOULD CHECK OUT
Our website uses cookies and other similar technologies to improve our site and your online experience. By continuing to use our website you consent to cookies being used. Read our privacy policy here.