The brilliant outdoor cinema is returning to Dubai Marina in October

The season kicks off with Bohemian Rhapsody, and tickets are now on sale…

After a summer spent checking out some of Dubai’s best indoor cinema experiences, we’re excited to be heading outdoors to catch a film this winter. And we don’t have long to wait, as the Urban Outdoor Cinema has announced it’s returning to the Habtoor Grand in Dubai Marina next month.

From Saturday October 12, Urban Entertainment will be putting on three films a week at their cosy outdoor cinema on the lawn of the Habtoor Grand, running every Saturday, Sunday and Monday. 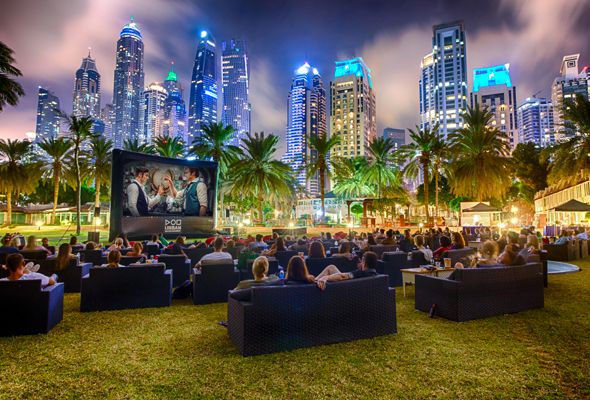 So, what’s on the schedule?

It kicks off on Saturday October 12 with the smash hit Queen biopic, Bohemian Rhapsody, followed by Avengers: Endgame on October 13 and Top Gun on October 14.

The following week, the outdoor cinema will show A Star is Born, The Goonies and Mamma Mia! Here We Go Again.

Into November, the Urban Outdoor Cinema will show classics including Back To The Future, Pretty Woman, Grease, The Breakfast Club and Notting Hill.

The December schedule features highlights such as Dirty Dancing, The Notebook and Clueless, before a weekend-long Christmas special takes place on December 21, 22 and 23 showing Home Alone, Love Actually and Elf.

Tickets are priced at Dhs75 for the film, but there’s also waiter service on hand where you can order a selection of all the usual cinema snacks as well as pizzas and tapas. Drinks on offer include soft drinks as well as wines and beers.

Film
EDITOR’S PICKS
Ramadan in Dubai: 50 iftars to try
READ MORE
Where can Dubai residents travel? Check out these 14 destinations
READ MORE
Rumours, facts and reveals: New Abu Dhabi bars and restaurants
READ MORE
UAE announces reduced working hours for Ramadan 2021
READ MORE
MOST POPULAR
There's a 30 per cent sale taking place during the long weekend on LegalHomeDelivery.com
Pics of the week: Your best photos of the UAE
Here's why you need to visit Mimi Kakushi's new Friday lunch
New films to watch in cinemas this week: May 13 to 19
Torno Subito's new lunch menu offers a quick mid-week vacation
YOU SHOULD CHECK OUT
Our website uses cookies and other similar technologies to improve our site and your online experience. By continuing to use our website you consent to cookies being used. Read our privacy policy here.