When it comes to cinema, as with most things in Dubai, we’re not limited to the standard cinema practices. In fact, there’s an array of luxury cinema experiences in Dubai you can upgrade to across the city – so we’ve been and checked them out for you. 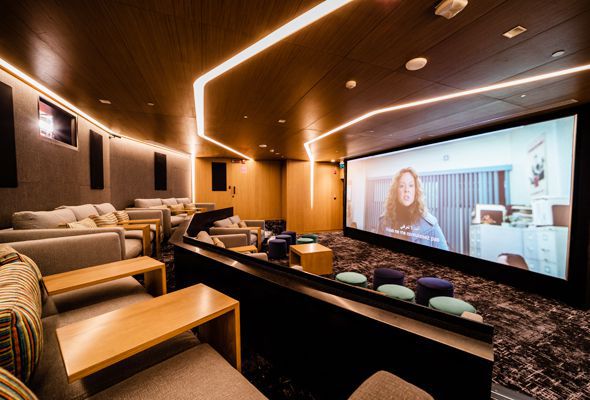 For a seriously exclusive, and luxe, cinema experiences – Vox Cinemas have opened a single screen, private cinema at Kempinski Hotel Mall of the Emirates. It can accommodate up to 15 people for tailored film viewings – meaning you get to pick the movie – along with a number of gourmet dining options available. As well as the plush 15-seat cinema room, there will be a lounge area complete with a bar area and marble-topped dining table. The experience will last for four hours and you’ll even get your own private waiter – fancy! Packages start from Dhs3000 for cinema and refreshments including soft drinks and popcorn (that’s Dhs200 per person if there’s 15 of you). Packages can then be tailored to include a range of different dining options from mezze platters and French cheese selections to full meals including burgers, grilled meats, seafood and salads. 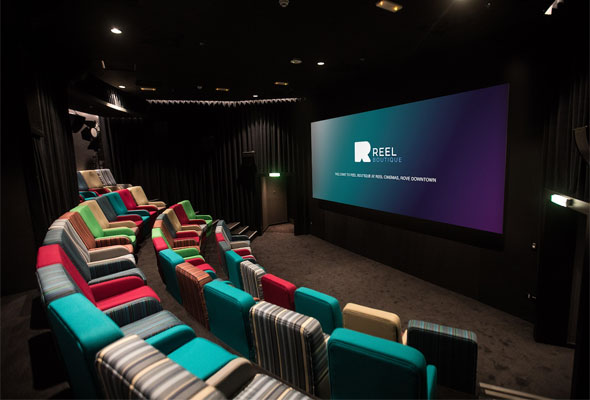 Reel Cinemas second serving of licensed cinema experiences comes courtesy of a collaboration with Rove Hotels, bringing the first hotel cinema to the region. The boutique cinema only has one screen, with an intimate 46 seats upholstered in a kaleidoscope of colours. Tickets are currently available for a discounted price of Dhs45, and you can buy food and drink separately. Drinks are a reasonable Dhs35 for spirits and Dhs40 for beers and wines. A full bottle of wine (for a longer movie, perhaps) will set you back Dhs175. Theres six food options on the menu, and it’s a concise range of easy to eat bites such as mini burgers, nachos and potato skins all around the Dhs40 mark. Due to the small size, it only shows a small selection of films each day, so there’s not a huge choice, but we love the fact that the cinema plans to balance showing both international blockbusters and regional cinema. Seats are cushy and comfortable and snacks are brought to your seat when they’re all ready, causing minimal disruption to the movie.

ThEATre by Rhodes at Vox Cinemas 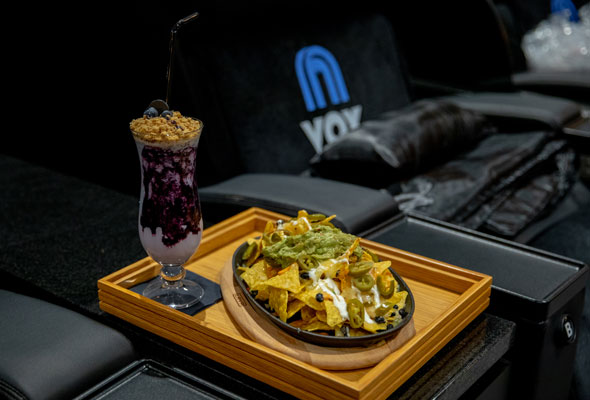 Vox cinemas are serious about their cinema snacks. So serious, in fact, that they’ve paired up with award-winning chef Gary Rhodes at two of their Dubai locations to bring you a top level dining and cinema experience, ThEATre by Rhodes. Don’t expect to be picking up your popcorn from a regular counter here, instead the waiting area is decked out like an upscale Gary Rhodes restaurant, with the option to dine outside ahead of the movie if you wish. Forget a simple choice of hot dog or nachos (although both are on the menu), here you’ll find an elaborate menu of chicken liver and foie gras pate (Dhs45), fish and chips (Dhs65) and even desserts such as cheesecake and sticky toffee pudding. You can order dishes a la carte (a standard movie ticket is Dhs168), or purchase a movie ticket for Dhs265 which includes film entrance, a three course meal, mocktail and coffee. Once you’ve placed your order, inside the cinema is just as plush. Oversized armchairs are well spaced, recline just right and come with a duvet and pillow for your convenience. There’s plenty of side table space for your dishes, and although service can be a little slow depending on how busy the cinema is, it’s discreet enough so as not to notice. Vox has really got the balance of dining and film just right, and we’d argue it’s the one to beat. 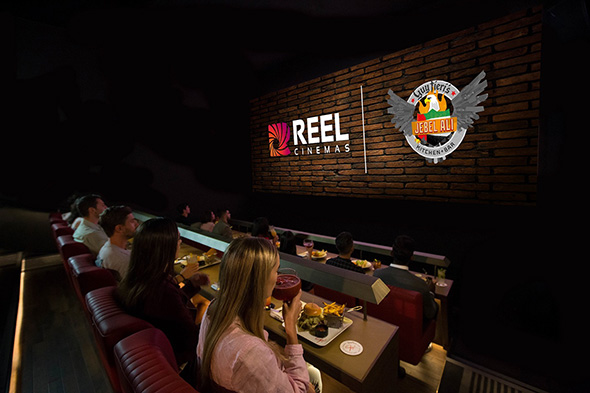 A collaboration between Reel Cinemas and American celebrity chef Guy Fieri, the licensed, dine-in cinema became the first of it’s kind in the region when it opened in 2018, found at Jebel Ali Recreation Club. It’s reasonably priced, with a movie ticket, starter and main and drink priced at Dh135, or add a dessert and it’s Dhs160. The selection isn’t extensive, but it’s a fully-loaded menu of Guy Fieri’s all-American signatures that includes the likes of trash can nachos, lobster roll and a bacon mac ‘n’ cheese burger. The cinema itself is somewhat of a let down if you’re looking for comfort. Laid out more like a lecture theatre than a cinema, the armless leather chairs are more ‘stand to attention’ than ‘sit back and relax’. Drinks are good, and well priced at around Dhs45 for an alcoholic beverage, but any more than two will leave you exiting the film more times than you’d like. The food is good, although having three courses served through a film is somewhat disruptive to us, and no doubt our fellow diners. 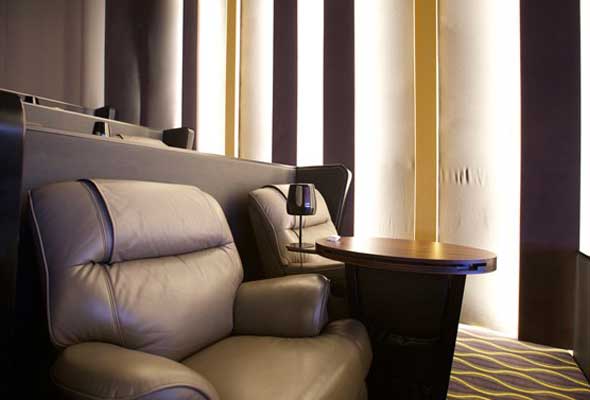 For a luxury cinema experience in Dubai, they don’t come better than Roxy Cinema’s Platinum Plus. Available at both the City Walk and The Beach at JBR branches, as well as their boutique Box Park location, this is basically the business class equivalent of going to the movies. Forget lingering for your movie in the entrance with the standard ticket holders – these venues come complete with a private lounge where you can pre-order a range of cinema snacks as well as a la carte dishes. Service is discreet and if you stock up on snacks before the movie starts, you won’t find yourself with any need to leave once you’re settled in. Once inside, the movie theatre is filled with plush reclining leather chairs which are spaciously laid out, VIP buttons that allow you to order service from a dedicated butler and state-of-the-art sound and visuals. With blankets and pillows available too, we probably won’t be leaving until September. 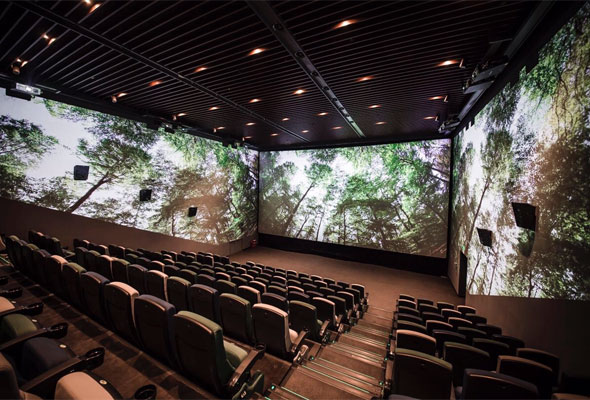 The first of its kind in the UAE, ScreenX is found at Reel Cinemas in the Dubai Mall. The 170-seater cinema boasts a 270-degree screen, which wraps around three of the cinema walls, leaving movie-goers feeling like they’re part of the film at times. As there’s only one screen currently at Dubai Mall, only one movie is being shown at a time in the immersive cinema format, so your options are limited. However, we don’t reckon you’d need to see a romcom in this format, and it makes sense to reserve it for action and adventure films. In terms of seats, they’re pretty standard, with ScreenX and ScreenX Plus on offer (the latter offering slightly more leg room, and placed towards the back of the theatre). The films are adapted to suit the screen, and although not all of the films will be shown in the 270-degree format, the parts that are really leave viewers feeling thoroughly immersed. For the highest impact, pick a seat towards the back. 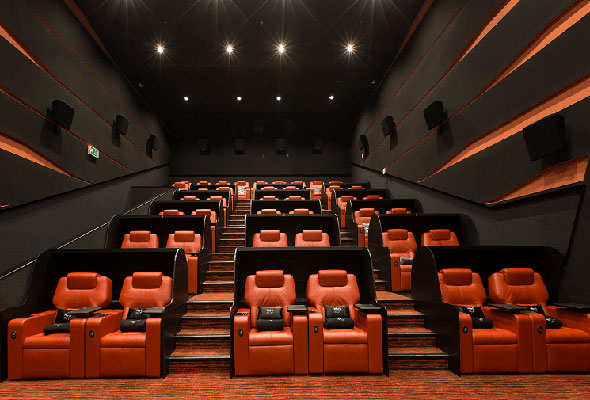 You can find the Novo 7 star cinema at Dubai Festival City, IMG Worlds of Adventure and Ibn Battuta malls. It’s not the greatest film selection (they show a couple of films at any time at both cinemas), but it’s usually the most popular ones. Before you get inside the cinema, you’ll be greeted by a lounge-style waiting area where you’ll be refreshed with a hot towel, and can browse a menu of starters, mains, desserts and snacks before heading inside. The seats are plush red leather, and each cinema-goer gets their own blanket and a cushion – which is a welcome sight in the highly AC’d theatre. You can order your food via an iPad between the seats, and the varied menu is well priced (dishes typically fall in the Dhs25 to Dhs45 price point). It features everything from burgers and pizzas, to salads, crepes, and ice cream sundaes, as well as the traditional cinema snacks such as popcorn and nachos. Service is efficient, friendly, and minimally disruptive, and once you recline in one of those red chairs, you’ll struggle to find a reason to move. 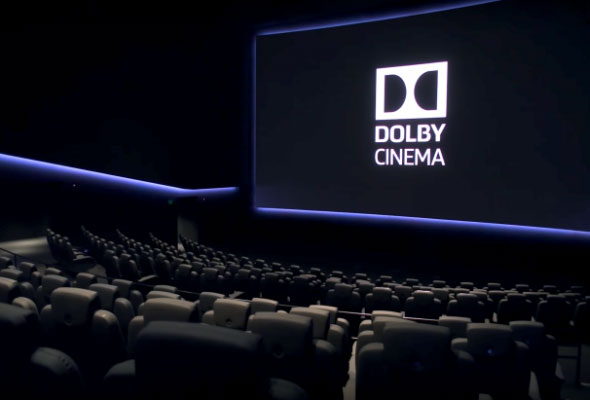 For serious screen buffs, Dolby Cinema has been brought to both Reel Cinemas at Dubai Mall and Dubai Marina Mall. It combines cutting edge viewing (you can expect to see colours you’ve never seen before on screen), with a surround sound audio that flows around you. Seats are comfy, and come with a slight recline too, to ensure maximum movie-watching comfort. While we weren’t blown away by the imagery – the sound was impressive and at some high-energy, high-action parts, it really felt like you were in the movie as the sound snaked from right to left. Best reserved for action films, we only wish there’d been a few more of those sound-busting moments.

Culture
Film
EDITOR’S PICKS
So, when is the next UAE public holiday in 2021?
READ MORE
All of the lavish new hotels set to open in Dubai in 2021
READ MORE
16 of the best pool passes in Dubai that are fully redeemable
READ MORE
All of the restaurants at West Beach, Palm Jumeirah
READ MORE
MOST POPULAR
Emirates announce discounted fares to quarantine-free destinations
Review: Kinoya – from supper club to fully-fledged licensed restaurant
Abu Dhabi to relax certain rules in nurseries
Review: No. FiftySeven Boutique Café inside Mall of the Emirates
Al Ain Raceway temporarily closed after freak storm on Saturday
YOU SHOULD CHECK OUT
Our website uses cookies and other similar technologies to improve our site and your online experience. By continuing to use our website you consent to cookies being used. Read our privacy policy here.