A few years ago it was announced that Zaha Hadid was designing the new headquarters of Bee’ah, an environmental agency, in Sharjah. The building was originally due to be open by the end of 2018 but construction is still on-going and it is now due to be completed in 2020.

The building was designed by the Iraqi-born British architect, who was known for her radical deconstructivist designs. The architect always sought to push boundaries and soon her distinct style earned her the nickname ‘Queen of curve’, as is evident by her awe-inspiring designs.

Zaha Hadid sadly passed away in 2016, but her eponymous architecture firm continues her work. The beautiful Bee’ah HQ was designed by her and the team back in 2013.

Here’s what the new Bee’ah HQ in Sharjah will look like (it’s about as dreamy as buildings get):

Rising amongst the desert dunes of Sharjah, the Bee’ah HQ design is inspired by the sand dunes that surround it.

Not only does the building look amazing, it is also considered to be the first Artificial Intelligence (AI) integrated building in the Middle East and North Africa (MENA) region and one of the smartest and sustainable worldwide.

According to an architect at the Zaha Hadid architecture firm, it is unlikely that “there has been this type of architecture married with a sustainability aspect” and the AI platform will help digitally transform the office to maximise productivity, business excellence and sustainable practices. 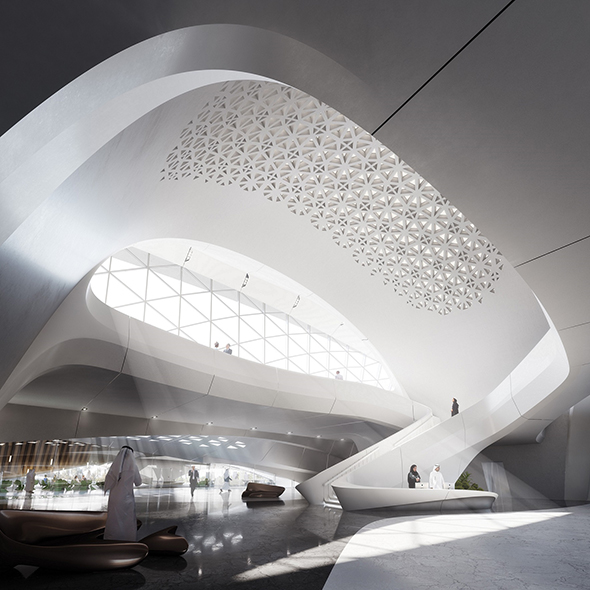 His Excellency Salim Al Owais, Chairman of Bee’ah, said, “In keeping with the UAE Strategy for Artificial Intelligence, we are pleased to unveil a revolutionary platform that will offer a vast array of smart integrated services, driving the nation to the forefront of the AI and data revolution, while enriching businesses and improving the quality of life of our citizens.”

It will use industry-leading technologies to power real-life interactions including facial recognition, machine learning, robotics and voice activated interface.

There will even be an intelligent concierge that will be able to engage visitors and employees to help locate available meeting spaces, book appointments, give directions, hail rides and support day-to-day tasks. Wow. 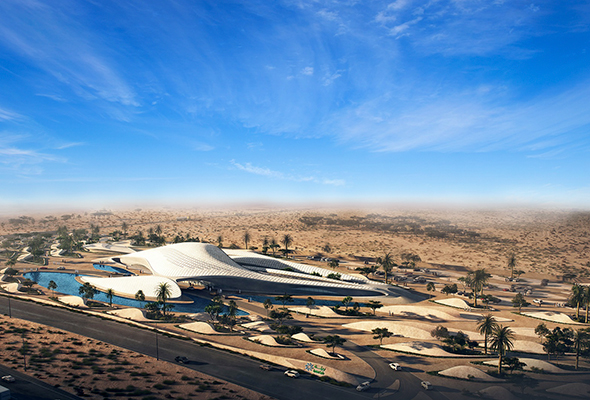 Every aspect of the building’s design was done keeping in mind the environment. It will be a zero net energy consumption building with photovoltaic (conversion of light into electricity using semiconducting materials) cells and it will also use Tesla’s advanced Powerpack battery to store energy generated.

Upon completion, the headquarters will be completely powered by renewable energy. It has been designed keeping in mind the parameters for the Leadership in Energy and Environmental Design (LEED) certification – which is the highest recognition awarded to green buildings.

Many of the materials used in the construction have been recovered as waste from local construction and demolition sites by Bee’ah. Also, Bee’ah is using its expertise in water recycling for non-potable use to keep the building’s water consumption as low as possible.

According to His Excellency Khaled Al Huriamel, Group CEO of Bee’ah, the objective of Bee’ah, when it was established in 2007, was to tackle all the environmental challenged that the region was facing. To showcase the DNA of what they wanted to accomplish – they had to build an iconic structure and a very modern building to reflect what Bee’ah stands for.

The team wanted a building that would encompass its sustainable vision but at the same time, create an iconic landmark for the emirate of Sharjah.

We can’t wait for it to open!

Culture
Tech
EDITOR’S PICKS
13 Sheikh Hamdan-approved restaurants in Dubai
READ MORE
Dubai brunches temporarily banned in new preventative measures
READ MORE
12 upcoming Dubai mega-projects we can't wait for
READ MORE
16 of the best beach bars in Dubai for sundowners
READ MORE
MOST POPULAR
5 awesome art events and exhibitions in Dubai to check out in March
Stay at the new Hilton Abu Dhabi Yas Island with park access from Dhs429
This Dubai beer garden is the perfect post-work watering hole
BOA Dubai has closed forever, here's what will replace it
2 Dubai chefs are teaming up for a cool collaboration in D3 next week
YOU SHOULD CHECK OUT
Our website uses cookies and other similar technologies to improve our site and your online experience. By continuing to use our website you consent to cookies being used. Read our privacy policy here.