The Dubai Monopoly board is now on sale: Here's what it's like...

The coveted Dubai landmarks have officially been revealed…

Dubai’s first Monopoly board game is now on sale at toy stores across the country. Over the past few weeks, Mr Monopoly has been touring the city in search of his favourite places – and now each of the chosen landmarks have now been revealed. 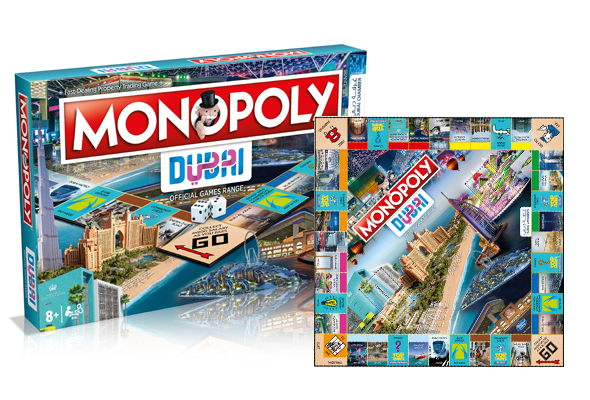 ALSO READ: 6 cool cultural events to check out in the UAE this November

On the Dubai Monopoly board, the brown tiles begin with Sheikh Zayed Road and Al Fahidi. After that it’s light blue, where you can place properties on Xclusive Yachts, La Mer, and CityWalk. Next up is pink, showcasing Atlantis Aquaventure, Dubai Miracle Garden and Dubai Frame.

As you move around you get to orange where you’ll find Al Seef, Festival City and Mall of Emirates. Then it’s red, home of Dubai Opera, Nord Anglia International School Dubai and Global Village. Yellow is up next with Souk Madinat, Dubai Marina, and Jumeirah Beach Hotel.

Green is the next one, highlighting Jumeirah Emirates Towers, Atlantis The Palm Hotel and Resort and Burj Khalifa. Before the final coveted dark blue where you’ll be able to claim Blue Waters and Burj Al Arab.

If you’re familiar with the structure of the famous game, you’ll know that the idea is to put your properties on tiles across the board. Each tile is worth a sum and when your fellow players land on your property, the need to pay that sum to you.

There are surprises along the way, meaning you could end up in jail, or you might get a nice payout, you never know what will happen next. Monopoly first debuted in 1935, and has been popular with families and groups of friends ever since, being played by more than one billion people across the world.

Just in time for the festive season, Monopoly Dubai is out today and will be priced from Dhs199 (dependent on retailer).

Culture
EDITOR’S PICKS
Ramadan in Dubai: 40 iftars to try
READ MORE
Where can Dubai residents travel? Check out these 14 destinations
READ MORE
Rumours, facts and reveals: New Abu Dhabi bars and restaurants
READ MORE
UAE announces reduced working hours for Ramadan 2021
READ MORE
MOST POPULAR
Looking for a cosy long stay residence in Dubai? Check this out...
Have you spotted the new Talabat Patrol team on Abu Dhabi roads?
Iftar home delivery for one? Here are some options...
Stunning Australian restaurant Hunter & Barrel is now open
Will Ramadan ever happen twice in the same year? Here's what we know...
YOU SHOULD CHECK OUT
Our website uses cookies and other similar technologies to improve our site and your online experience. By continuing to use our website you consent to cookies being used. Read our privacy policy here.