The launch was due to take place just after midnight tonight…

Just after midnight on July 15, the UAE was due to make history by becoming the first Arab nation to send a probe to Mars. However latest reports confirm that the launch has been delayed due to bad weather in Japan.

The @UAESpaceAgency and the @MBRSpaceCentre, in collaboration with Mitsubishi Heavy Industries, announce a delay of the Emirates Mars Mission’s Hope Probe launch due to the weather conditions at the launch site of Tanegashima Island in Japan.

The new launch date will be Friday July 17 at 12:43am UAE time, which again will be subject to good weather conditions The launch window is open until August 31. 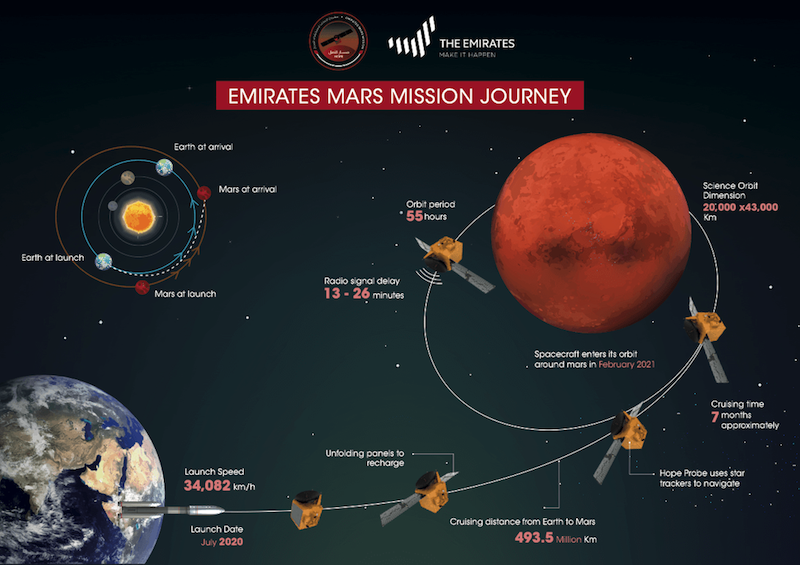 On July 17, a rocket will carry the unmanned spacecraft from the launch site at Tanegashima Space Centre in Japan.

About one hour after takeoff, the probe should detach from the launch rocket. The following 24 hours will be crucial, according to UAE Mars mission’s deputy project manager Sarah al-Amiri.

“In my heart of hearts, I’m looking forward to the initial 24 hours after separation, and that’s where we see the results of our work,” Amiri told AFP earlier this month. “It is when we first get the signal, when we know that every part of the spacecraft is functioning, when the solar panels are deployed, when we hit our trajectory and are headed towards Mars.”

The Hope Probe is expected to reach Mars’ orbit by February 2021. It will then loop the planet for one Martian year, which lasts 687 days.

Time is of the essence, as the UAE is in a race with China and the US to reach Mars.

Tune in for the launch

To catch all the action as it unfolds, you can live stream the event at emm.ae/live.

You can choose from four viewing channels, including Dubai TV and Abu Dhabi TV with Arabic commentary, Dubai One with English commentary, or a visual display without commentary.