The UAE is one step closer to making history as the final piece of the Mars Probe was fitted on Tuesday February 18, 2020. H.H. Sheikh Mohammed bin Rashid Al Maktoum, Vice President of the UAE and H.H. Sheikh Hamdan bin Mohammed bin Rashid Al Maktoum, Crown Prince of Dubai were in attendance of the landmark moment and along with Emirati engineers placed the final piece on the Mars Probe.

A video by Emirates News Agency WAM shows Sheikh Mohammed and Sheikh Hamdan being shown around the Mohammed bin Rashid Space Center while being briefed on the Mars mission.

The main moment can be seen the fifth minute into the video with Sheikh Mohammed and Sheikh Hamdan holding the final piece to the Mars Probe.

The gold plate bares the logo of the Mars Probe and the UAE emblem and a quote that reads “The power of hope shortens the distance between the Earth and sky”. The plate also contains the signatures of H.H. Sheikh Mohamed bin Zayed Crown Prince of Abu Dhabi, Sheikh Mohammed, Sheikh Hamdan and other royals and dignitaries. 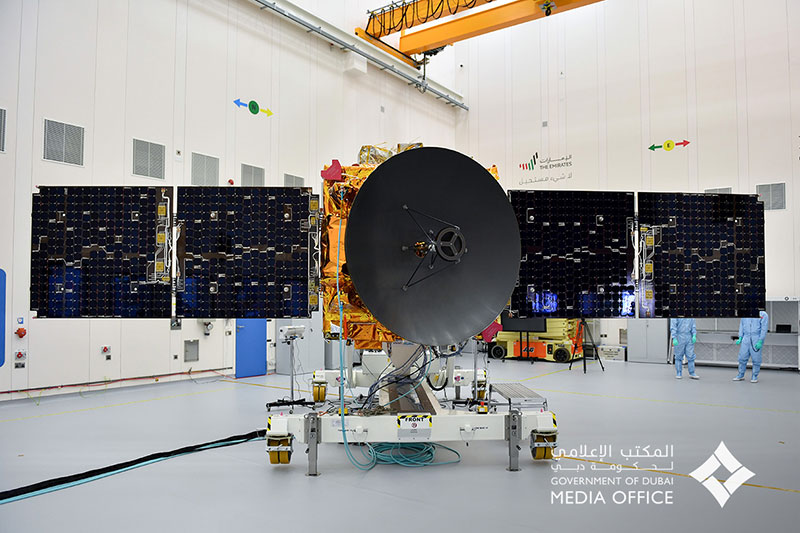 The Hope Probe mission, also called the Emirates Mars Mission, is the first by any Arab or Muslim-majority country. There have currently been 26 successful missions to Mars from nine countries. So this mission marks an amazing feat for a country currently only 49 years young.

The unmanned probe will launch from Tanegashima Space Centre in Japan and will join two probes already in place. The other probes come from NASA who is studying the upper atmosphere of Mars, and the other from India who is analysing the lower atmosphere.

The UAE probe will study how the upper and lower layers interact with one another to complete the study. In total, over two years of scientific data will be collected. Information which will then be used by scientists to research life for humans on Mars and other planets.

So, when is the launch date?

While we don’t have an exact date of launch, we know it will be sometime in July. We’re curious to know if it will coincide with the Sheikh Mohammed’s birthday on July 15.

Scientifically speaking though, the July time frame was picked as this is the time Earth and Mars will be at its closest.

However, there’s still quite a distance to cover from Earth to Mars – 60 million kilometres to be exact – so the journey will take seven to nine months. It will reach the red planet by 2021, coinciding with the 50th anniversary of the nation’s formation.

What a great way to celebrate 50 years!

This isn’t the UAE’s first venture into space. Just last year in September 2019, Major Hazza Al Mansoori became the first Emirati astronaut in space. The astronaut went to the International Space Station for eight days before returning safely back to earth.

Royals
EDITOR’S PICKS
UAE holiday dates announced for Eid Al Adha
READ MORE
Emirates extends suspension of flights from India to UAE again
READ MORE
Coming soon: Everything we know about Ain Dubai so far
READ MORE
Khorfakkan set to open new tourist attraction 580 metres above sea level
READ MORE
MOST POPULAR
It's Dhs350 to brunch, stay and play at the What's On Lock In this weekend
UAE weather: Temps of over 50ºC recorded in the shade yesterday
Get a free Expo 2020 day pass when you fly with Emirates
A popular fairy-tale is gracing the stage at The Theatre at Mall of the Emirates in August
UAE petrol prices will increase again in August 2021
Exclusive interview: John Cena on his role as a 'douchey Captain America'
YOU SHOULD CHECK OUT
Our website uses cookies and other similar technologies to improve our site and your online experience. By continuing to use our website you consent to cookies being used. Read our privacy policy here.