Visitors arriving at UAE airports will receive a neat martian ink stamp in their passports to commemorate the Hope probe’s historic arrival to the Mars orbit on February 9.

The ink, according to the information received, is made from the same rocks as to those found on Mars. Wow.

On the stamp, is an emblem of the country’s ambition and guiding principle that ‘Impossible is Possible’.

The stamp has been produced by the UAE Government Media Office in collaboration with Dubai Airports and will serve as a memorable reminder of a new era for Arabs in time and space with a special message reading, ‘You’ve arrived in the Emirates. The Emirates is arriving at Mars on 09.02.2021.’ 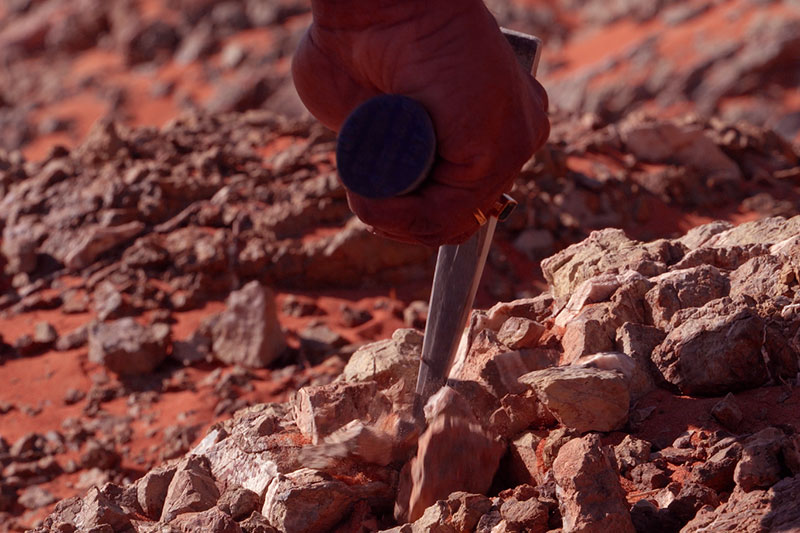 The limited-edition design is made from the world’s first ‘martian ink,’ extracted from volcanic basalt rocks that give mars its distinct rusty colour.

Khaled Al Shehhi, Executive Director of Production and Digital Communication Sector, UAE Government Media Office stated that the historic mission of the Hope probe entering into Mars’ atmosphere is one to be celebrated with the rest of the world.

He said, ‘we have created a special stamp printed with ‘Martian Ink’ – made of basalt rocks found in the deserts of the UAE. This will be embossed on the passports of all the visitors to the UAE arriving at this time for a limited period.’

The rocks were collected during a special mission to the UAE’s eastern Al Hajar Mountains and Sharjah’s Mleiha Desert by experts and gemologists.

The rocks were then crushed into a fine paste, dried in the sun and mixed with adhesives to create three separate colours that represent the red planet – Mars.

Basalt rocks, which can only be found in certain parts of the world, date back tens of millions of years and give the UAE’s mountain ranges their distinct rugged look.

The Hope probe’s next crucial step takes place on February 9 where the spacecraft will rapidly reduce its speed from 121,000kmph to 18,000kmph to enter Mars’ orbit.

Why this mission is important

Once it reaches the atmosphere, the unmanned spacecraft will explore the climactic dynamics of the Red Planet in daily and seasonal timescales for a full Martian year (687 earth days).

The probe will gather and send back the new Mars data to the Science Data Centre in the UAE via different ground stations spread around the world. The data will be catalogued and analysed by the Emirates Mars Mission science team and shared for free with the international Mars science community as a service to human knowledge.

The insights and data we gain from understanding the Martian climate will add new dimensions to human knowledge about how atmospheres work, which will help scientists and researchers evaluate distant worlds for conditions that might support life. Understanding the geographical and climate changes of Mars and the other planets will help us gain deeper insights to find solutions for key challenges facing mankind on earth.

The probe’s successful arrival to Mars will make the UAE the fifth nation in the world to reach the Red Planet after the United States, Soviet Union, China, the European Space Agency and India.

News
Transport
EDITOR’S PICKS
13 Sheikh Hamdan-approved restaurants in Dubai
READ MORE
Dubai brunches temporarily banned in new preventative measures
READ MORE
12 upcoming Dubai mega-projects we can't wait for
READ MORE
16 of the best beach bars in Dubai for sundowners
READ MORE
MOST POPULAR
Take a trip around Latin America with the new concept at Zoco Dubai
Try something new: 8 fun new things to do in Dubai
Sheraton's Bonfire Street Food Market is a big alfresco weekend vibe
Pics of the week: Your best photos of the UAE
New films to watch in cinemas this week: March 4 to 10
YOU SHOULD CHECK OUT
Our website uses cookies and other similar technologies to improve our site and your online experience. By continuing to use our website you consent to cookies being used. Read our privacy policy here.