Is it coming home this year? Is Mbappé in the same G.O.A.T. tier as Ronaldo and that little Argentinian fella? Will Belgium finally come good on their exceptional potential (and current No.1 FIFA ranking)? Who will choke? Which under dog will rise up and stun the world with an impassioned display? Which players will double their transfer fees? Who will fall from grace?

We don’t know. Stop asking. What we do know however is the best bars and bargains in Abu Dhabi for watching all the glorius UEFA Euro 2020 cup drama unfold. 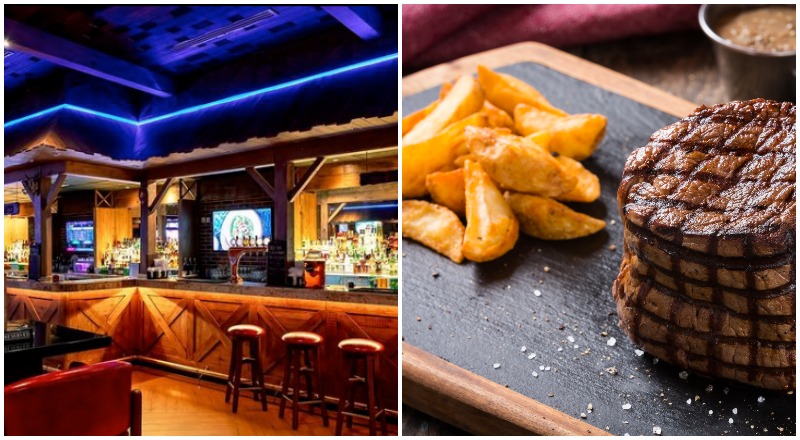 49ers steakhouse is a legit Abu Dhabi institution with a proven pedigree for ‘big game atmosphere’, which makes it an ideal choice for catching the footie. Enjoy the beautiful game here with their hops bucket and nibbles combo packages (from Dhs99) and pints of authentic German frothy stuff from Dhs25. 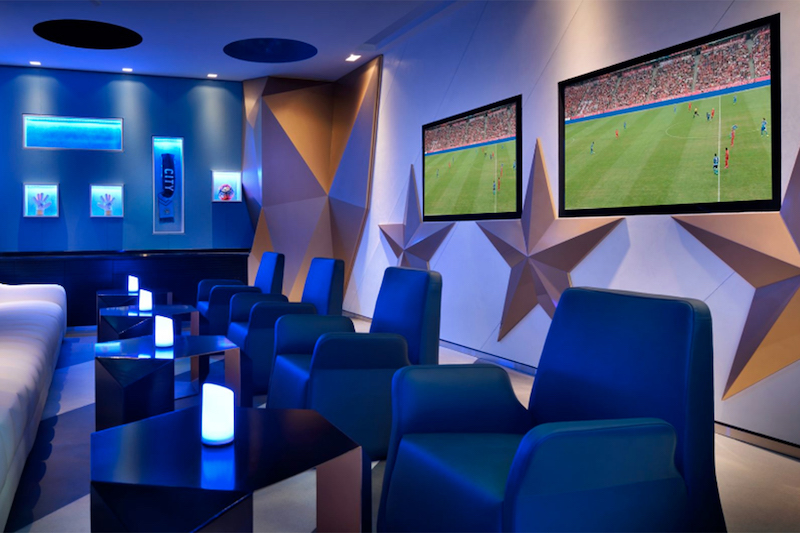 A sporty little number in Southern Sun Abu Dhabi, Blu Sky has a series of screens positioned specifically for uninterrupted viewing, so you wont miss a single catch or ball snatch in the match. There’s a daily happy hour (midday till 3am close) with special prices on draught hops. 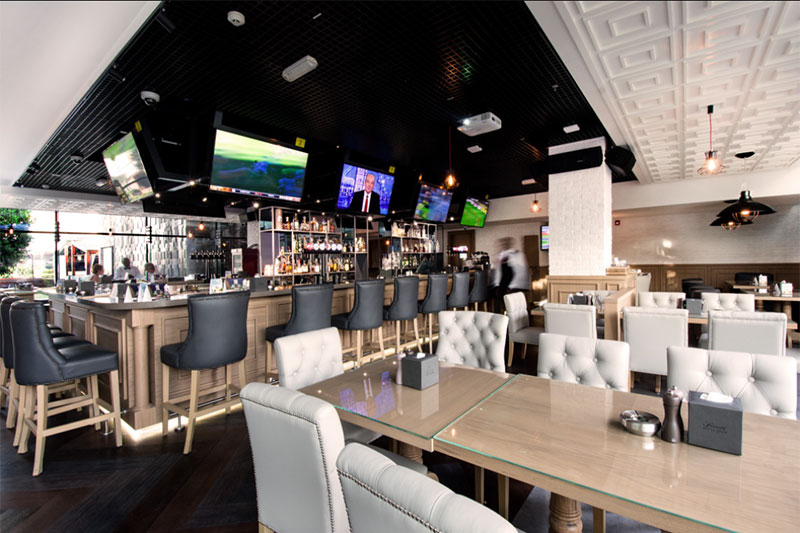 Bridges Bar at Fairmont Bab Al Bahr maybe relatively boutique in size, but its screens are still pretty massive and that’s important when it comes to choosing your spectating spot for a match. They also have a daily 4pm to 8pm happy hour (two-for-one on select drinks) and a pretty big Saturday and Sunday deal that will net you two pints of hops for just Dh1 when purchased with any main course. With the fact that also includes their giant burgers — we’ll mark that up as a cheeky hattrick of big reasons to visit.

Sprinting into the box with big screen TVs and some banging deals for the Euros C.mondo is looking like a pundit’s top pick this tournament. There’s a daily 5pm to 9pm happy hour with select drinks at just Dhs20, combo deals, snack platter offers, as well as bargains on buckets and pitchers of hops. Especially for the Euros spectators can win big prizes by guessing the scorer; there are discounts across the menu; free-flow packages (Dhs120), and unlimited chicken wing deals. On paper this has to be a favourite for the golden pint glass. 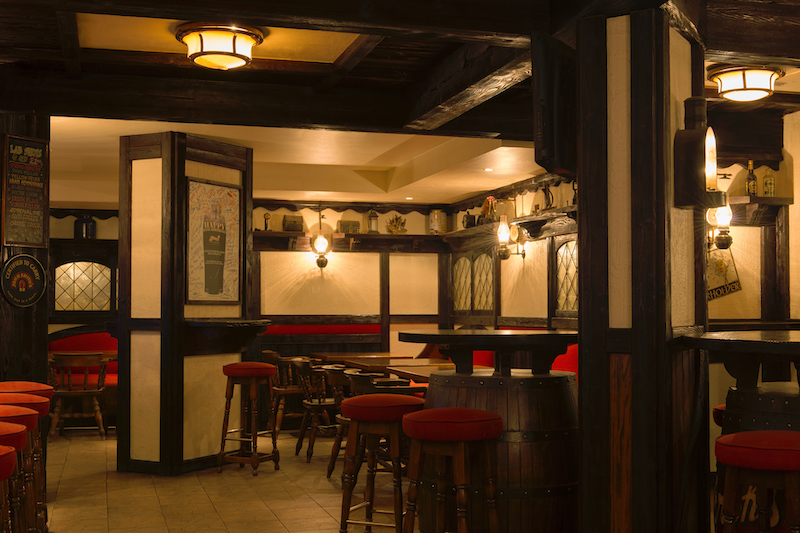 This British pub flexes its thrifty tekkers every night of the week with a daily happy hour that’s more than just 90 minutes. Enjoy midday to 8pm dramatic saves, with selected drinks just Dhs25 each. 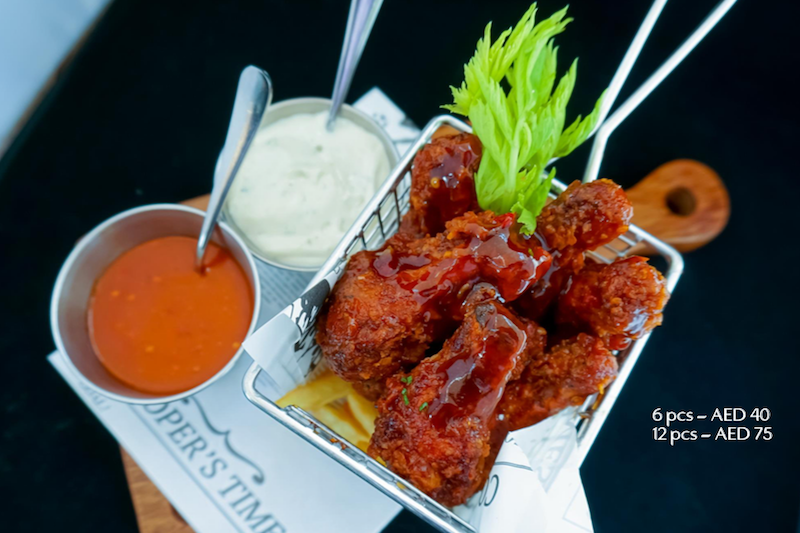 Cooper’s is a firm favourite (that’s unchanging favourite, not ‘The Old Firm’s favourite) for sports fans in the capital and it’s not hard to see why. It’s a handsome hang spot with large screens — making the referee a big enough target to hurl whatever life advice you might deem appropriate at. There’s also a Sun to Thu happy hour (4pm to 8pm) and a special Sport’s Hub for the summer, with the opportunity to win prizes and make savings on a menu of pub grub fan favourites. 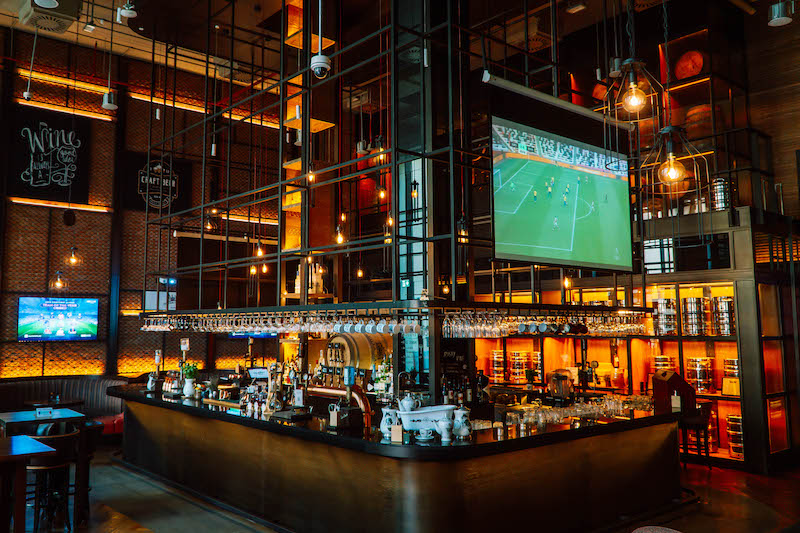 London-style sports bar Hamilton’s is found in Saadiyat Rotana, and because it’s also a gastropub, at half-time you can look forward to something a little more substantial than oranges cut into quarters. Pull up a seat in this art deco dude’s (and dudette) den, and score daily (except for Friday) discounts with a 5pm to 7pm happy hour on select drinks. There are nine massive screens making for the perfect stadium atmosphere, match that against the hops combo deals (from Dhs149) and in-match free-flow packages (Dhs179) and Hamilton’s looks headed for the final. 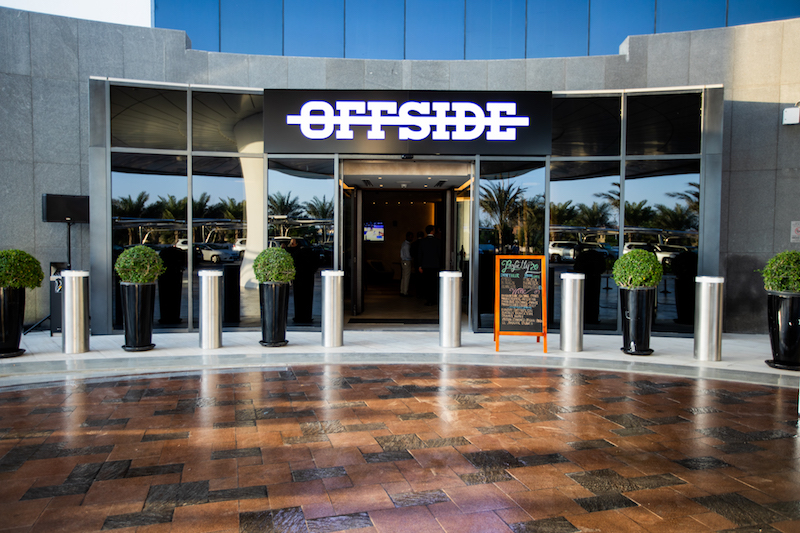 Found at the stunning Jumeirah at Saadiyat resort, this homage to sports reportage is kicking off your Saturday session with a brunch. Between 1pm and 5pm there’s a range of grilled delights, and free-flow hops and grape for just Dhs295. Want to take the competitive spirit off-screen and in-house — there’s a dart board and pool tables to flex your skills (or lack of) over. Weekday happy hour is from 5pm to 7pm and from midday to 7pm at weekends. 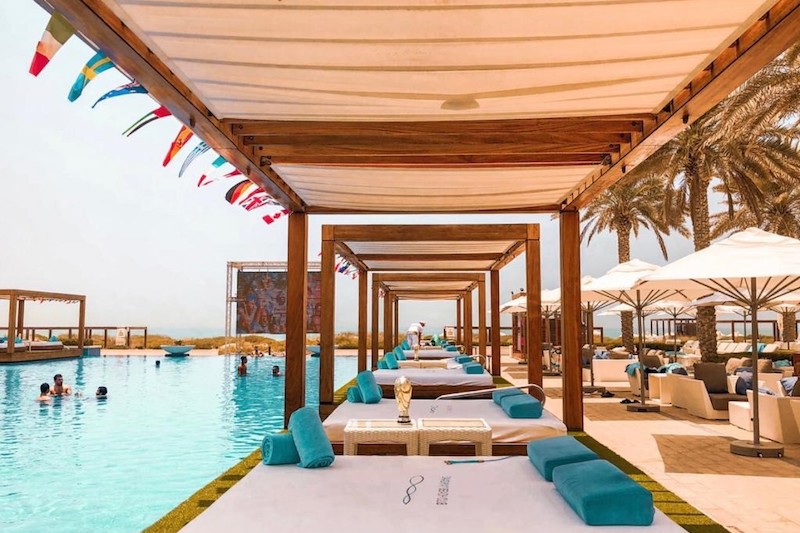 Three words for you: In-pool-spectating. A dream that’s now a reality thanks to the new cinematic screen installed at Saadiyat Beach Club. Imagine being ‘the twelfth man (or woman)’, cheering on your team from the shallows of an infinity pool, on an immaculate stretch of desert island beach. Extra-time? OK then, if we must. And we reckon this might be the only known way to actually enjoy watching a penalty shoot-out. Dining is taken care of with special match packages in addition to the healthy collection of a la carte options. 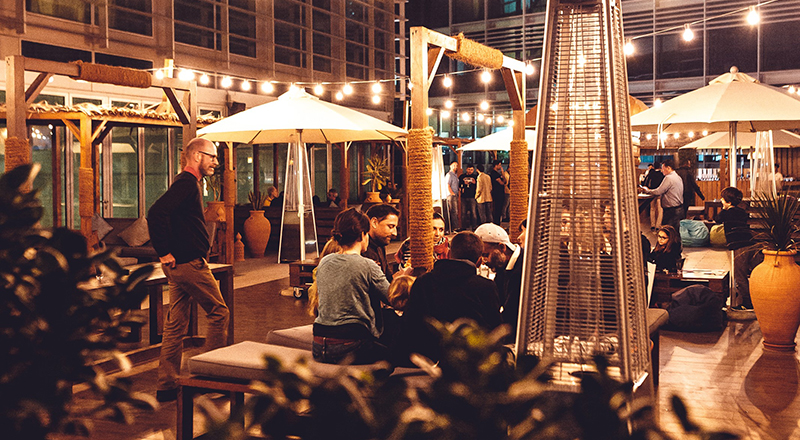 With alfresco and non-fresco (shh we’re claiming it) seating, decent pub snacks (baos, the baos) and a vibrant atmosphere — Waves would feature in our first 11 every time. Their daily two-for-one happy hour will be running throughout the tournament between the hours of 5pm and 8pm. There will also be a very special bucket deal. The details of which will follow shortly.

Eat & Drink
Sport & Fitness
Things to do
EDITOR’S PICKS
Here's the full list of UAE public holidays in 2023
READ MORE
23 incredible things to look forward to in the UAE in 2023
READ MORE
Hidden gems: 10 UAE desert pop-ups to discover this winter
READ MORE
Where to travel in 2023: 10 new flight routes from the UAE
READ MORE
MOST POPULAR
26 of Dubai's best beachfront restaurants
8 wonderful things to do in Dubai this week: Feb 6 to 9
Where to go to get your Al Baik fix in the UAE
Reset and recharge with a relaxing staycation at this stunning Dubai hotel
The most expensive apartment in Dubai just sold for Dhs410 million
YOU SHOULD CHECK OUT
Our website uses cookies and other similar technologies to improve our site and your online experience. By continuing to use our website you consent to cookies being used. Read our privacy policy here.