A look inside Warner Bros. Hotel opening this November

The world’s first Warner Bros. Hotel is now just a few weeks away from opening to the public.

Talking about the imminent November 11, 2021 launch, Pam Lifford, President of WarnerMedia Global Brands and Experiences said: “Opening the doors to the first ever Warner Bros. branded hotel is a moment that we have long dreamed of, and it’s truly magnificent.”

Of course there’s a whole cinematic universe of entertainment to enjoy in the Warner Bros. World Abu Dhabi theme park right next door — including 29 rides and attractions, live entertainment and thrilling character interactions — but the hotel has its own stellar cast of blockbusting things to do.

That’s not all folks…

There are a ton of engaging exhibits, trinkets, props, costumes and Acme-crafted objects plucked from Warner Bros.’ rich film and television history.

Take for example, the eerie autoplay piano from sci-fi western, Westworld, bashing out jarringly nostalgic tunes; there’s a replica of that iconic fountain from the opening credits of Friends — and the scene of some very 90s subversively nerdy dancing; and kids calling room service can request a visit from that most wascally of wabbits, Buggs Bunny. If cartoons have taught us anything though, beware of bunnies with room service, always check for ticking noises/burning fuses. 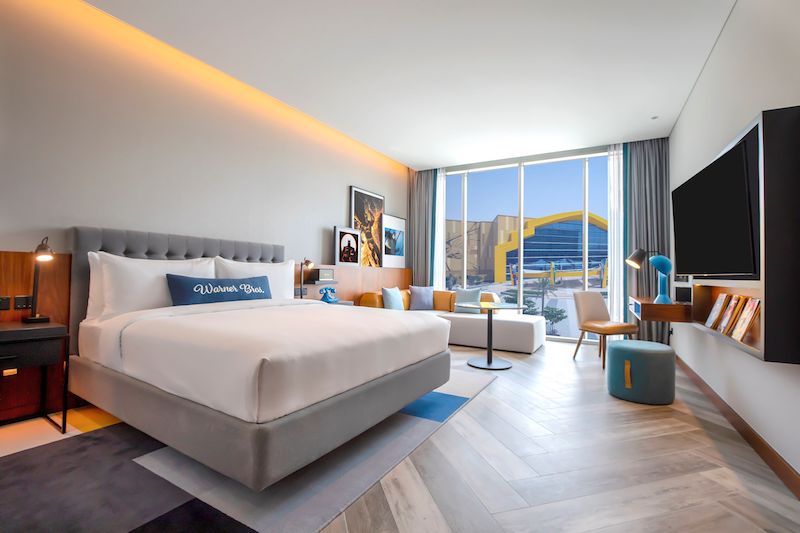 More casual dining is available at laid back pool bar, The Matinee; a lobby lounge called Craft Services; and an international restaurant known as Sidekicks.

Guests can look forward to some pretty loony room features too, with each of the 257 keys offering artwork and design finishes fitting in with three separate themes.

“From Script to Screen” offers BTS and origin story insights for a range of Warner Bros projects, illuminating the journey from written page to the final shot.

“Artist Confidential” showcases a collection of some of Warner Bros. most dazzling talent from both sides of the camera.

Speaking about this exciting development, HE Mohamed Khalifa Al Mubarak, Chairman of Miral, said: “We are proud to be launching another first with the opening of the only Warner Bros. hotel in the world.”

“This new story-driven hospitality experience is set to excite guests from all over the world, further reinforcing Yas Island’s position as a global entertainment, leisure and business destination and supporting Abu Dhabi’s ambition to attract greater numbers of local and international tourists.”

Eat & Drink
News
Staycations
Things to do
Travel
EDITOR’S PICKS
Ain Dubai will open with fireworks, live music and a drone show
READ MORE
Incredible Aura SkyPool to open in Palm Tower this November
READ MORE
Brit Grand Slam hero Emma Raducanu confirmed for Mubadala Tennis
READ MORE
What’s On Nightlife Awards 2021: Here are the nominees...
READ MORE
MOST POPULAR
Why Armani/Hashi is trending hard on the Japanese cuisine scene
Celebrate creativity at City Walk during this three-weekend event
This Heinz Beck brunch at Waldorf Astoria just got an upgrade
10 brilliant things to do in Abu Dhabi this long weekend: Oct 21 to 23
Experience Arabesque elegance at Asil's Saturday lunch
YOU SHOULD CHECK OUT
Our website uses cookies and other similar technologies to improve our site and your online experience. By continuing to use our website you consent to cookies being used. Read our privacy policy here.