One of New York’s most popular restaurants has announced it will be opening in Dubai around February next year.

CATCH, which is situated in the heart of the trendy Meatpacking District, is a magnet for the great and good of the celebrity scene, and can count David Beckham, and Jay Z and Beyonce among their diners. There’s even a splash of stardom in the kitchen, with Executive Chef Hung Huynh having achieved notoriety by winning US reality show Top Chef.

Diners at the Dubai restaurant, which replaces the legendary Spectrum On One at The Fairmont, Sheikh Zayed Road, can expect to find an open kitchen and several serving stations – hot, cold, raw, rolled, grilled – all set within a trendy wood and metal interior. As is now seemingly common, a sharing concept is at the heart of the menu.

“We have nurtured CATCH New York and seen it grow into a brand that appeals to the contemporary diner in search of a complete dining experience,” the team, who can also count Abe & Arthur’s, SL New York,
Tenjune, Lexington Brass and The Chandelier Room in their stable of Stateside success stories, behind the launch said in a statement. 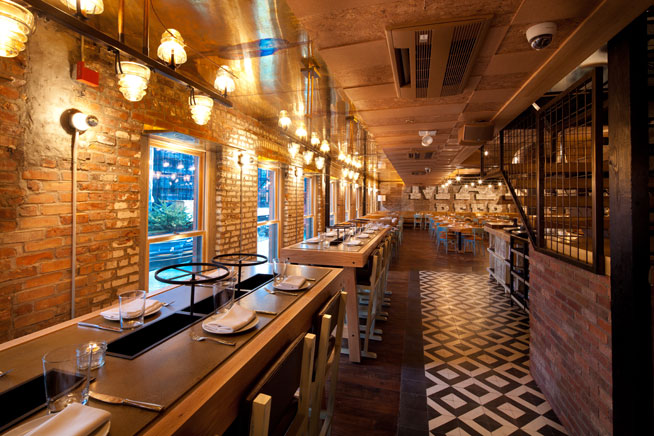 WHAT ELSE IS NEW…

Marina Social
Jason Atherton returns to Dubai with his new restaurant in the yet-to-be-opened InterContinental Hotel in the marina. The Brit was last in town in 2003 in charge of Verre, which later became Table 9. He once worked with Ferran Adria at the famed El Buli restaurant in Spain. “I loved living here, but things have moved on very dramatically since then,” says Jason on his first stint in Dubai. “Dubai Marina was a desert. These days it’s much more like London where the city has different, self-sufficient communities that have everything you need.”

Reign
There aren’t many culinary combos you can’t get your hands on in Dubai, but we reckon French-Japanese fusion might just be one of them. Not for long though. DIFC is set to welcome Reign, a new restaurant combining the “sophistication and refinement” of French fare with ingredients and “philosophies” from Japan. Can we expect to see snail sushi on the menu? We’ll find out when Reign opens this winter.

Novikov
This hip restaurant arrives from London via Russia, and will set up shop at the Sheraton Grand Hotel Dubai next to The H Hotel on Sheikh Zayed Road. The culinary identity of Novikov celebrates innovative dining that merges traditional Asian cuisines with modern trends. With a stunning menu that includes Novikov’s special Peking duck, king crab Leg wasabi Gratin and toro tartare with caviar can we hope for a new contender for best Asian restaurant in town? Time will tell.

Coya
There is no cuisine hotter right now than Peruvian. The South American country will be well represented in Dubai with a new restaurant, Coya, that comes to the Four Seasons hotel in Jumeirah in December. The same group behind multi award-winning French restaurant La Petite Maison will handle the London import, so it’s in good hands. Coya will be one of ten dining outlets at the long-awaited hotel on Jumeirah Beach Road. The decor will be rustic and traditional with antiques dotted around the place. As well as serving Peruvian food, the venue will also act as a cultural space, hosting photography exhibitions, poetry evenings and the like.

Taste Of Italy
Legendary chef Heinz Beck is to open a second restaurant in Dubai, less than one year after his venture in the region. The three-times Michelin-starred German has enjoyed great success with fine-dining establishment Social by Heinz Beck at the Waldorf Astoria The Palm since it’s opening in April 2014. And now he has revealed details of a new project at The Galleria Mall on Al Wasl Road that is set to open in February 2015.

Best of
Eat & Drink
News
Restaurants
EDITOR’S PICKS
13 Sheikh Hamdan-approved restaurants in Dubai
READ MORE
Dubai brunches temporarily banned in new preventative measures
READ MORE
12 upcoming Dubai mega-projects we can't wait for
READ MORE
16 of the best beach bars in Dubai for sundowners
READ MORE
MOST POPULAR
Satisfy your BBQ cravings at selected UAE Rotana hotels to win big prizes
7 worthwhile ways to celebrate Women's Day in Abu Dhabi
You can now buy Marks & Spencer's clothes at Nakheel Mall, Palm Jumeirah
Dine with acclaimed chef Massimo Bottura in Dubai this month
Tuck into Moroccan cuisine at this gorgeous restaurant in Downtown Dubai
YOU SHOULD CHECK OUT
Our website uses cookies and other similar technologies to improve our site and your online experience. By continuing to use our website you consent to cookies being used. Read our privacy policy here.