Last December thousands of people were flooded out of their homes in parts of the UK, as the powerful Storm Desmond wrecked havoc across the British Isles, leaving chaos in its trail. Houses were ruined, cars swept away and businesses hit as the storm took hold, turning lives upside down, with some of the UK – Lancashire and Cumbria particularly badly affected – crippled over night.

The McVitie’s ‘Biscuit Works’ factory, in Carlisle – home to some of the UK favourite snacks – felt the brunt of the storm, halting biscuit production overnight. As any self-respecting Brit will tell you, theirs is a nation forged on tea drinking, and what every good cup tea needs, of course, is a biscuit. With biscuit production all but over thanks to the storm, Britain has been gripped with a biscuit shortage panic! And with production not due get back on track until April 2016, hoards of Custard Creams, Bourbons and Ginger Nuts are missing from the shelves (Bourbons in particular were badly hit), leaving Brits biscuit-less.

Terrifying news for the British, who’ve been forced to cut down on their 34,000 ton per month biscuit-eating habit. 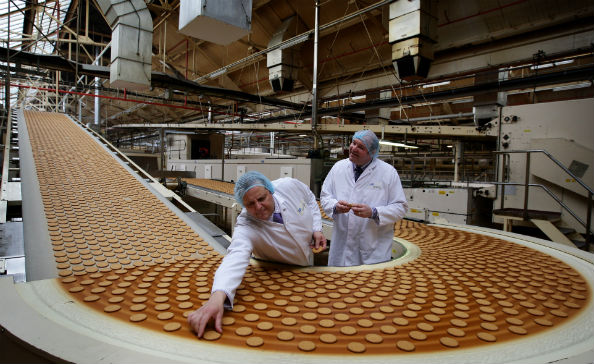 Cue Dubai’s very own Emirates Airline, who have quite literally ‘taken the biscuit’, sweeping to the rescue by flying out two 777 Emirates SkyCargo planes from Johannesburg, South Africa, through Dubai and on to Doncaster Sheffield Airport, filled to the brim with 90,000kg worth of biscuits in order to help alleviate the grieving nation’s biscuit woes.

This is the first time an Emirates cargo plane has ever landed in Doncaster Sheffield Airport – and it was all because of the biscuits.

Dayle Hauxwell, cargo manager at Doncaster Airport, told the Doncaster Free Press that they were delighted to welcome Emirates to the airport, saying “Thanks to this new relationship the Great British public have been able to enjoy a biscuit with their cuppa.

“We were delighted to welcome Emirates to Doncaster Sheffield Airport. This new relationship shows that our cargo operations are going from strength to strength and our reputation for handling cargo flights from around the globe is growing.”

For the Brits, a cup of tea without something on the side is like hummus without pita bread; Shwarma without tahini – a travesty to suggest that anything could replace the humble biscuit as the perfect accompaniment to a cup of tea.

Especially in a country that drinks roughly 60.2 billion cups of tea per year.

News
Transport
EDITOR’S PICKS
13 Sheikh Hamdan-approved restaurants in Dubai
READ MORE
Dubai brunches temporarily banned in new preventative measures
READ MORE
12 upcoming Dubai mega-projects we can't wait for
READ MORE
16 of the best beach bars in Dubai for sundowners
READ MORE
MOST POPULAR
Enjoy brunch, breakfast and a stay at Westin Abu Dhabi from Dhs432
Get a free gym class at this cool new Dubai gym
Pics of the week: Your best photos of the UAE
Emirates Airlines and DHA to implement digital verification of traveller medical records
7 of the tastiest breakfast burgers, buns and baps in Dubai
YOU SHOULD CHECK OUT
Our website uses cookies and other similar technologies to improve our site and your online experience. By continuing to use our website you consent to cookies being used. Read our privacy policy here.