Could this project ease traffic on Sheikh Zayed Road?

A massive roadworks project is set to ease traffic on Sheikh Zayed Road. Here’s an update on its progress.

The head of the Road & Transport Authority (RTA) has given an update on the new roads being built in Dubai as part of the Parallel Roads project, announcing that the new routes – that will extend 108km from Sheikh Rashid Road to the entrance of Abu Dhabi – are 30 per cent complete, and that the entire project will be finished by 2017.

“The Parallel Roads Project is one of the vital projects currently undertaken by RTA to ease the snarl of the Sheikh Zayed Road,” explained H.E. Mattar Al Tayer, Director-General of the RTA.

*READ MORE: The latest on the Dubai Canal project*

– Al Tayer announced that part of a bridge that will pass over Dubai Water Canal from Al Quoz to Safa Park, will be open in August. The road will range from six lanes to 10 lanes, and the part that will definitely be open in August will fly over Meydan Street and Godolphin Stables, through to the Al Quoz Industrial Area (you can see the bridge in the image at the top of the page). This 3.5 kilometre flyover will be three lanes in each direction over the Dubai Water Canal, and will increase to five lanes from Godolphin Stables to Al Quoz.

Here’s the area the finishing-in-August flyover will run across: 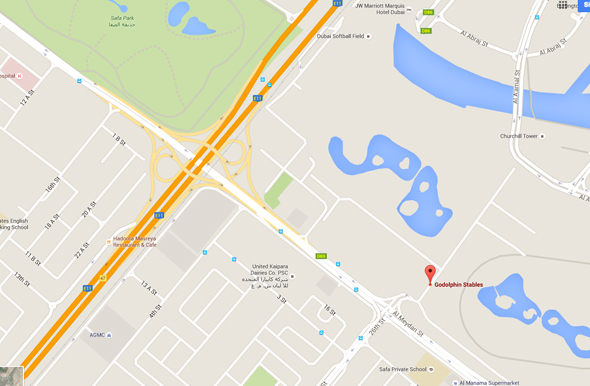 Here’s another glimpse of the new flyover: 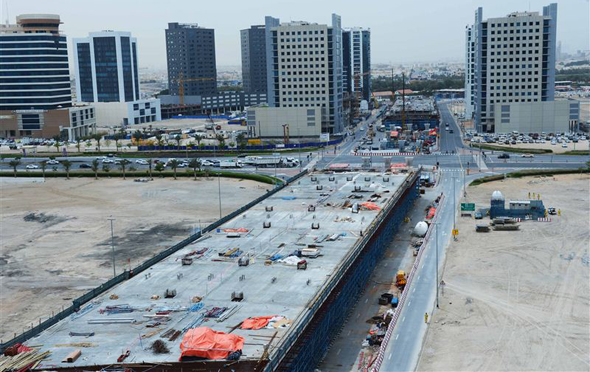 – In the words of Al Tayer himself, the above flyover project involves many other smaller roads: “The project also includes upgrading the existing junction of Al Meydan Street and Al Khail Street where flyovers will be constructed to provide left turns and ease the snarl in the junction during peak hours. [As well as] a two-lane ramp serving the traffic inbound from Al Khail Road heading towards Sharjah, and up to the junction of Al Asayel Road and Oud Metha Road. It also includes providing entry and exit points for the Meydan Development Project.”

Here’s a wider view of the new project (the dark blue shows where the opening-soon flyover will run): 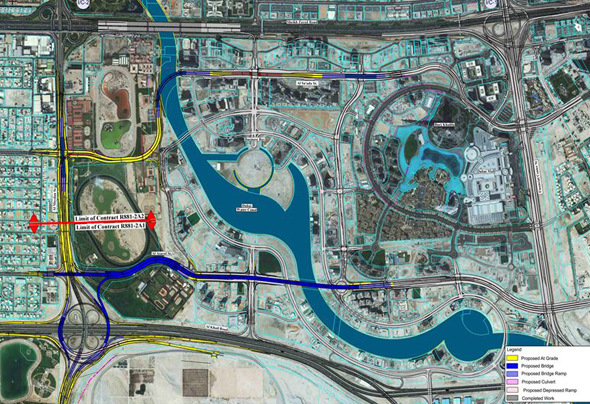 Al Tayer explained the aims of the entire Parallel Roads project: “This traffic corridor, which comprises three lanes in each direction, starts from Sheikh Rashid Road in the north and extends 108 kilometres, terminating at the entrance of Abu Dhabi… The entire project constitutes a traffic hub supporting Sheikh Zayed Road and Al Khail Road, and upon completion it will ease the traffic movement in the area parallel to the Sheikh Zayed Road to the East.”

By East, he means the project will help the traffic on the roads on the landlocked side of Dubai that run parallel to Sheikh Zayed Road, rather than those close to the ocean.

The already completed parts of the project include…

Here’s a video showing H.E. Mattar Al Tayer checking up on the progress of the project:

HE Mattar Al Tayer announced that 30% of the work had been completed #RTANews #ChairmansNews pic.twitter.com/logctHWohD

So yes, while rush hour traffic can be frustrating at times, it’s good to know that there are plans in place to get the roads to flow (as well as the water of Dubai Canal).

News
Transport
EDITOR’S PICKS
Here's the full list of UAE public holidays in 2023
READ MORE
23 incredible things to look forward to in the UAE in 2023
READ MORE
Hidden gems: 10 UAE desert pop-ups to discover this winter
READ MORE
Where to travel in 2023: 10 new flight routes from the UAE
READ MORE
MOST POPULAR
Pics of the week: Your best photos of the UAE
Dhow & Anchor has got you covered every day of the week
RTA: All the road closures you need to be aware about
Review: The Nice Guy Dubai
Masha and the Bear is coming to Abu Dhabi this April
YOU SHOULD CHECK OUT
Our website uses cookies and other similar technologies to improve our site and your online experience. By continuing to use our website you consent to cookies being used. Read our privacy policy here.