Cars without people behind the wheel, bitcoin technologies, Dhs1 billion innovation investments and more. Here are Sheikh Mohammed’s plans for Dubai by 2030.

The Roads and Transport Authority have just announced that they’re trialling driverless cars in the UAE.

This is a new initiative in collaboration with the Dubai Future Foundation, a group established by H.H. Sheikh Mohammed Bin Rashid Al Maktoum, ruler of Dubai and Vice President of the UAE.

*ALSO: What three of the Dubai 2020 expo buildings will look like*

Sheikh Mohammed has confirmed that there is a plan in place that means 25 per cent of the vehicles on Dubai roads will be driverless by 2030.

In his words, this move will “reduce congestion and reduce pollution”, it will also give back “millions of hours wasted” and lead to the “increased productivity of individuals”.

Sheikh Mohammed went on to say that Dubai will become the “world’s largest research & development lab for driverless transportation”.

The driverless cars that the RTA are testing at a conference this week are fitted with safety features and a sensor to avoid collision. Sheikh Hamdan has already tested them (pictured above) and they come from a company called Easy Mile and travel short distances on pre-programmed virtual routes. The route of the car can easily be adjusted if need be.

They can move 10 passengers, and the speed limit is 20 km per hour.

Here’s a video that shows how they work…

Sheikh Mohammed shared this illustration of driverless cars (could this be Sheikh Zayed Road by 2030?):

SO WHAT IS THE DUBAI FUTURE FOUNDATION? 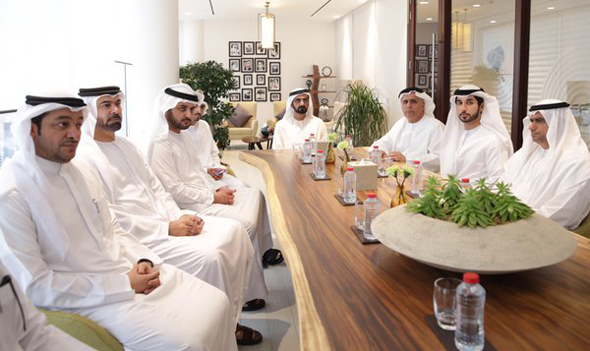 The Foundation’s board. Photo: Twitter/SheikhMohammed.

The Dubai Future Foundation will be headed up by His Highness Sheikh Hamdan bin Mohammed bin Rashid Al Maktoum, Crown Prince of Dubai.

Its aim is to strategise about the future and put in action plans that will make Dubai a smart and sustainable city by 2030.

“The future is not built on possibilities and numbers but on clarity of vision, planning, action and implementation,” said Sheikh Mohammed of the 2030 plan.

“Shaping the future is not a new concept for Dubai,” he added. “The city has achieved significant experience in aviation, trade, financial services and technology.”

Dubai’s leaders are putting their money were their mouths are too, and have also set up a Future Endowment Fund worth Dhs1 billion to invest in innovation.

Speaking of the Arab world’s history of innovation, Sheikh Mohammed said: “Arabs and Muslims established the House of Wisdom in the 9th century as a global model for sciences and a platform for innovators from all over the world. Today we need this concept again in the 21st century to keep up with the changes and shape the future to serve humanity. After more than 1000 years we are recreating this wisdom through the Dubai Future Foundation.”

SO WHAT WILL IT DO?

“Dubai Future Agenda will focus on supporting and developing individuals, organisations and sectors, and include more than 20 initiatives to enhance the leadership of Dubai and the UAE,” Sheikh Mohammed explained.

There are three main pillars of the foundation:

– Individuals: This will be all about boosting the capabilities of individuals to shape the future in a positive way through financial support, public services etc. Training programmes and the like will be set up for those working in both the government and the private sector.

Two of the areas being developed for individuals are the ‘Mostaqbal Portal’, a scientific platform to publish reports and visual material about the latest developments in science and the ‘Schools of the Future’ report, which highlights the future of the educational system in the short and medium term.

– Organisations: This part of the plan will be all about engaging companies from both the private and public sector to conduct research and help boost the latest technologies. They will also establish the Future Laboratories, which will work with international companies and research institutions to develop innovative solutions for the future.

– Sectors: This part of the programme will organise interactive exhibitions to educate people on future plans, it will also set up ‘Future Partners’, a network of researchers and innovators worldwide all working toward the shared goal of a smart and sustainable world. There will be incubators to support good ideas. There will also be an area called ‘Future Cities’ that works with other governments to help boost the UAE’s innovations around the world.

– The Museum of the Future on Sheikh Zayed Road – read more about that here. This won’t just be an exhibition space, it will also include laboratories of innovation in the health, education, energy and transportation sectors.

– UAE Drones for Good – an award with a prize pool of Dhs4.6 million. Read all about the 2016 winners here.

– The world’s first 3D printed office (being built in Dubai).

– The World Federation of Future Sports (yes, robots on the field). More on that – and the games event planned for 2017 – here.

– The Global Blockchain Council – made up of 42 government entities and private companies – working to develop Blockchain technologies. What is that you ask?

Here’s a definition of the Bitcoin-related technology from CIO.com:

“A web-based distributed ledger system in which applications can be built upon to increase data integrity and control, provide time-stamped verification and attribution, and increase efficiencies through automation. A blockchain is a public ledger of all bitcoin (cryptocurrency) transactions that have ever been executed.”