You shouldn't call this the Dubai Eye anymore...

You know the giant Ferris wheel they’re building off the coast of JBR? Yeah, well it’s been renamed from Dubai-I to Ain Dubai.

Why? Well, for the non-Arabic speakers, ‘Ayn’ is the sixteenth letter of the Arabic alphabet, and translates as ‘eye’.

The Ain Dubai will serve as the centrepiece of Bluewaters Island – a new Dhs6 billion project which will include a range of entertainment, hospitality, residential and retail zones as well as the Ferris wheel.

*MORE: New Dubai island might just be the world’s most romantic place*

The Ain Dubai has reached a significant milestone in its construction, with the Ferris wheel’s hub and spindle recently lifted into place.

If you’re not sure what a spindle is (don’t worry, we weren’t either), here’s a photo: 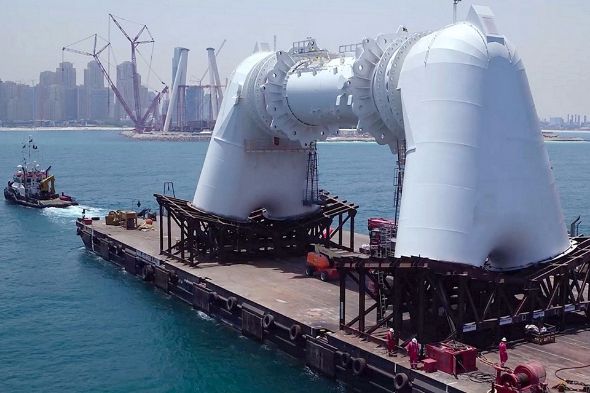 Here you can see the spindle in place: 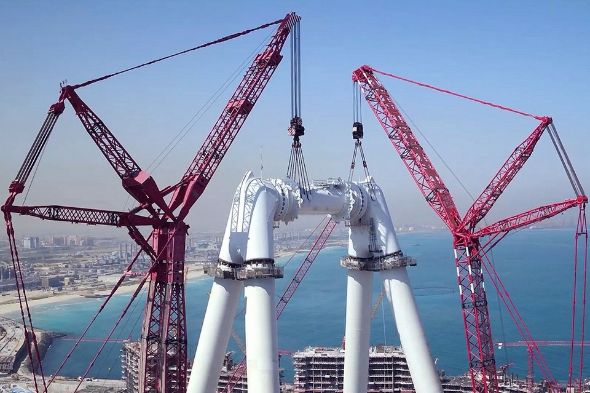 The hub and spindle were both manufactured and assembled in the UAE and later shipped to Bluewaters Island to be placed atop the Ain Dubai’s 126-metre-high legs.

The assembled hub and spindle stretch 40 metres across and 20 metres high, weighing a total of 1,805 tonnes.

*MORE: The Jumeirah bridge is finally open (well, part of it)

The wheel’s hub will later be connected to the rim via 192 spoke cables.

Once completed, the Ain Dubai will feature 48 capsules and a holding capacity of up to 1,400 visitors at any given time – with a full rotation of the Ain Dubai taking 48 minutes.

The Ain Dubai’s construction was made possible thanks to the help of two of the world’s largest cranes, each with an 180-metre-long boom and the capability to lift more than 3,000 tonnes.

For reference, that’s a lifting capacity of close to 11 Airbus A380s.

Speaking of the Ain Dubai, Omar Delawar, Chief Projects Officer at Meraas, said: “Once completed, Ain Dubai will emerge as an engineering masterpiece, the first of its kind in the industry, and a truly spectacular must-visit attraction, adding a unique experience and vantage point to the list of things to do in Dubai.”

The Ain Dubai was supposed to start construction back in June 2013 and be completed by 2015. However, the start date was pushed back to May 2015, meaning we’ll hopefully see it finished at some point next year.

News
Things to do
EDITOR’S PICKS
Ain Dubai will open with fireworks, live music and a drone show
READ MORE
Incredible Aura SkyPool to open in Palm Tower this November
READ MORE
Brit Grand Slam hero Emma Raducanu confirmed for Mubadala Tennis
READ MORE
What’s On Nightlife Awards 2021: Here are the nominees...
READ MORE
MOST POPULAR
Free parking announced in Dubai on Thursday, October 21
Atlantis the Palm's Culinary Month is back with some amazing restaurants
7 fun spots to celebrate Halloween in Dubai with the family
The best places to watch the spectacular Ain Dubai fireworks show
This brunch serves up delicious Arabic dishes and non-stop captivating entertainment
YOU SHOULD CHECK OUT
Our website uses cookies and other similar technologies to improve our site and your online experience. By continuing to use our website you consent to cookies being used. Read our privacy policy here.