Dubai Pokémon GO players are selling their accounts for thousands

If you’re sick of Pokémon GO, prepare to have your feathers ruffled. If you’re still playing, don’t stop. Why? Well, people are selling their Pokémon GO accounts for thousands of Dirhams.

How much, you ask? High-level accounts are going for the cost of some cars on dubizzle right now.

*VIDEO: This Dubai man had the worst day of his life*

What’s On spoke to Dubai-based player Michele Paula, who downloaded Pokémon GO with the aim of reaching high levels in mind, but when she realised she could sell her account and put the cash towards fixing her motorbike, she decided to have a go at flogging it on dubizzle. She’s currently got it listed for sale for Dhs15,000.

Check out some of the listings: 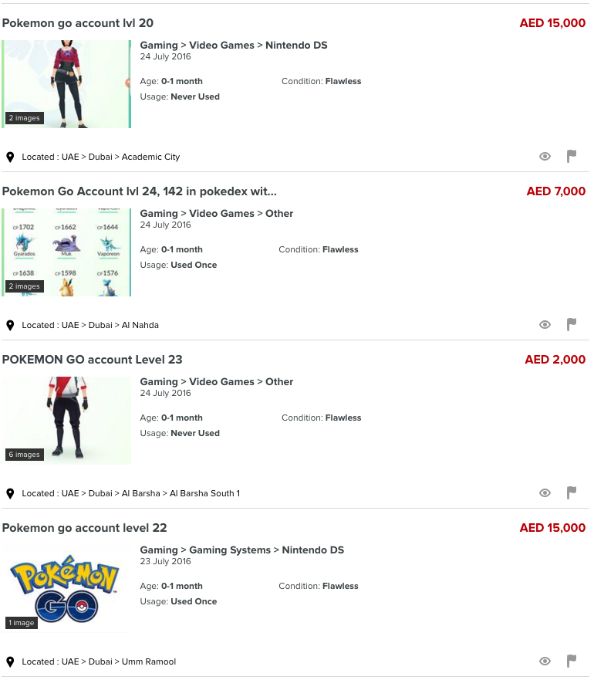 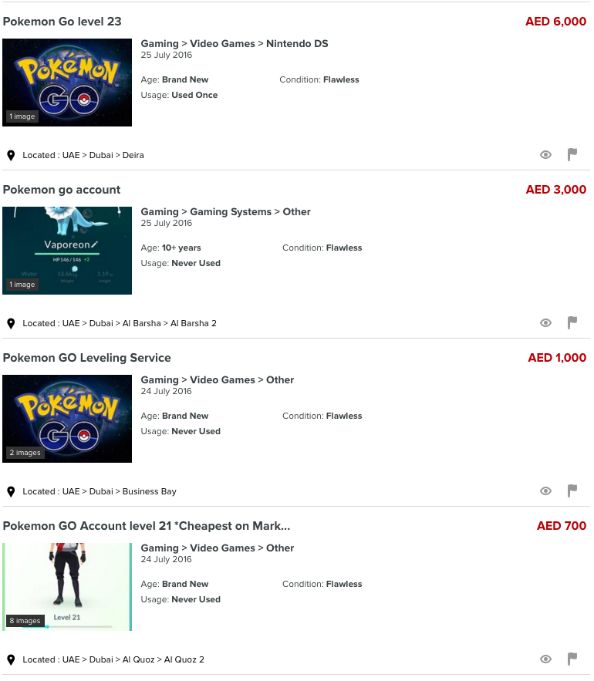 Speaking to The National, Omar Moued, 29, talked about selling his account on dubizzle after seeing somebody do it on YouTube, saying, “His account wasn’t as strong as mine, so I decided why not?”

Despite receiving a slew of negative emails regarding his level-24 account, it sold for Dhs11,000 three days after posting.

This is just in Dubai. Some accounts around the world have reportedly sold for amounts of up to Dhs37,000.

If you’re an old person, staring at the screen with furrowed brow wondering what it is about the game that people are willing to pay so much for – it’s the ‘Combat Power’ and rarity of the Pokémon in the player’s collection.

The higher the combat power, the harder it is to catch and beat.

*ALSO: Have you noticed the mobile game taking over Dubai?*

The game’s developer, Niantic, forbids the sale, resale, rent or lease of Pokémon GO accounts. So those involved in the buying and selling of accounts are doing so at their own risk.

As a platform, however, dubizzle allows people the right to trade freely, with the Product Marketing Manager at dubizzle Razal An Masri telling The National, “If they wish to sell something that they can no longer use, it is their choice.”

News
EDITOR’S PICKS
So, when is the next UAE public holiday in 2021?
READ MORE
All of the lavish new hotels set to open in Dubai in 2021
READ MORE
16 of the best pool passes in Dubai that are fully redeemable
READ MORE
All of the restaurants at West Beach, Palm Jumeirah
READ MORE
MOST POPULAR
Watch: 100 days to go for Expo 2020 Dubai
Burj Khalifa tops list of most searched-for bucket list experiences
There's massages and panoramic views at the highest spa in Dubai
7 beautiful things to do in Abu Dhabi this weekend: June 24 to 26
10 amazing things to do in Dubai this weekend: June 24 to 26
YOU SHOULD CHECK OUT
Our website uses cookies and other similar technologies to improve our site and your online experience. By continuing to use our website you consent to cookies being used. Read our privacy policy here.