Yes, this actually happened in Dubai this week

Add this to the list of things you only see in Dubai.

We’ve seen some precarious parking in Dubai before, but this might take the cake.

The unfortunate Dubai resident whose car was rammed in this picture had just popped into the Arabian Ranches Pizza Hut to pick up his order after finishing work about 6.30pm on Monday.

“I parked my car at the end [of the car park] where it is empty so it wouldn’t get scratches – how ironic,” the man, who asked to remain unnamed, told What’s On.

“My pizza was ready so all I had to do was pay and leave, the whole process took two minutes.”

However when he left the store, he was confronted with this sight: 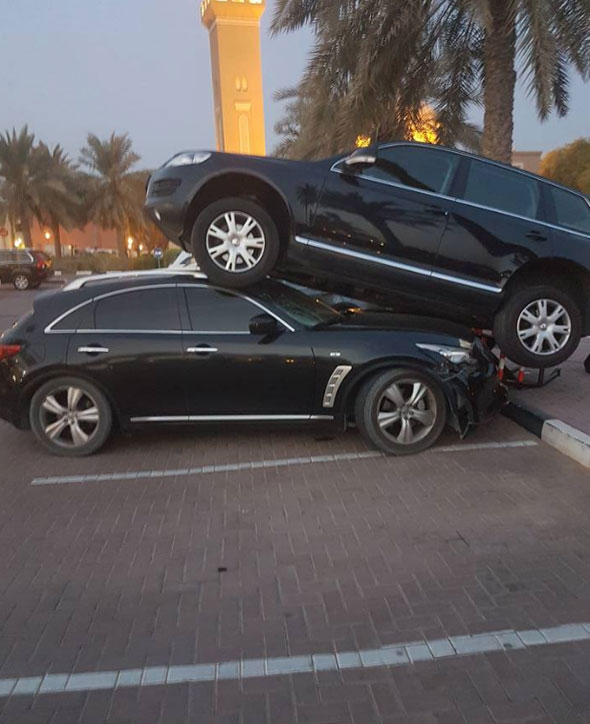 “I thought I was imagining it until I came closer,” said the man. “I was speechless. There were people all around it looking at me as I approached with my pizza in my hand… I looked ridiculously funny.”

He told the Khaleej Times it was a freak accident.

“The driver who was parked on the other side pressed on the gas pedal while parking instead of the brakes. He hit the pole and that worked as a ramp to get on top of my car,” he said.

READ MORE:
*Popular Dubai hair salon hit by fire*
*This Dubai road is going to be closed until February*

The poor driver also lost more than a scratch-free car – the incident made him lose his appetite, so he ended up binning the pizza he was there for in the first place.

He had to wait three hours for the police report to be completed and for his car to be moved.

“The police were really surprised by the accident, they said they hadn’t see anything like it before,” he said.

Unfortunately both cars were heavily damaged as a result, but thankfully both drivers have full insurance.

We’ll now think twice before parking near any poles…