This Dubai road is going to be closed until February

The work to improve the roads around Bur Dubai and Mankhool is trucking along, but that now means a temporary road closure…

Sometimes things have to get worse to get better, and that’s now the case for some motorists travelling around Oud Metha or towards Al Mina, but it will particularly affect evening rush hour for those who live in Karama and work in Old Dubai.

Why? Well the exit that takes vehicles seamlessly from Al Maktoum Bridge and then Umm Hurair Road to Sheikh Rashid Road will be closed as of today, and will only reopen in February 2017.

An alternative route along a slip road has been set up – which is indicated by the blue line – while the red line is the previous route that is now closed: 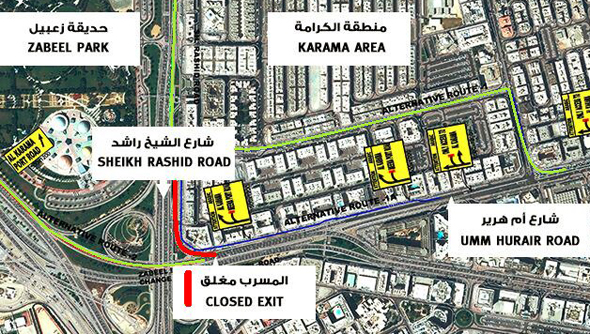 The exit has been closed so that a one-lane bridge can be built connecting Umm Hurair and Sheikh Rashid Roads. It’s all part of the overall improvements being made to the Al Shindagha Traffic Hub.

“We thank road users on cooperating with us and we appeal everyone to pay attention and follow the guidance signs and alerts for alternative routes,” explained the RTA of the closure, which they say will ultimately “improve traffic flow”.

WHAT THE LARGER PROJECT WILL BRING TO THE CITY

The larger Al Shindagha Traffic project will help ease traffic from Trade Centre to the older parts of the city, and will improve many roads in the city’s historical centre.

One of the companies working on the Al Shindagha Traffic improvements with the RTA, Parsons, describes the scale of the project on its website:

“The Shindagha Corridor improvement project consists of a new bridge—connecting Bur Dubai to Deira—that will serve as a gateway to Dubai, as well as an evaluation of an existing tunnel under the waterway, nearly 10 km of a new 12‑lane expressway, multiple major interchanges, and various local roadway improvements throughout the historic district of Dubai.”

The new 12-lane expressway that will be built as part of the project will effectively replace Al Shindagha Tunnel.

According to Emirates 24/7 the larger project will be finished by the end of 2017. It will help ease the bumper-to-bumper traffic now seen during rush hour on Sheikh Rashid Road in the Mankhool area.

In April of this year, the RTA opened the new Wafi Interchange linking Sheikh Rashid Road with Oud Metha Road as part of this project.

Other parts of the project include an elevated bridge on Sheikh Khalifa Bin Zayed Road that will ease traffic flow in Bur Dubai, Karama and Al Mankhool. According to the RTA this will be a “two-lane bridge on the intersection of Sheikh Khalifa bin Zayed Road with Kuwait Street, [with] a signalised junction underneath the bridge.”

There will also eventually be a tunnel to take traffic from Al Garhoud and Wafi Interchange to Port Rashid. This will particularly help traffic for people turning right into Karama during rush hour.

We’ll bring you more updates on this project as soon as we hear them.

News
Transport
EDITOR’S PICKS
What’s On Nightlife Awards 2021: Here are the nominees...
READ MORE
It's back! What's On Lock In returns to Media One Hotel
READ MORE
Arts and culture: 5 spots we can't wait to visit at Expo 2020 Dubai
READ MORE
UAE petrol prices are set to decrease in September 2021
READ MORE
MOST POPULAR
Pics of the week: Your best photos of the UAE
A stylish new Southern-European Neo Bistro is opening in Dubai
Staycation at this stunning hotel which is now dog-friendly
Get an Expo 2020 Dubai monthly pass for Dhs95 valid for the whole of October
New films to watch in cinemas this week: September 23 to 29
YOU SHOULD CHECK OUT
Our website uses cookies and other similar technologies to improve our site and your online experience. By continuing to use our website you consent to cookies being used. Read our privacy policy here.