A Tron light cycle is up for sale on dubizzle

If you’ve ever fantasised about being part of a futuristic universe, now’s your chance…

How rad was Tron: Legacy? We’d totally get beamed into another dimension if it meant Daft Punk parties and sweet sci-fi motorbikes.

If you didn’t see the 2010 movie, it’s basically about a guy whose video-game developer dad mysteriously appeared… scroll down, we’ll fill you in in a second.

Anyway, back to the real world.

Well, or are we? Because currently there’s something straight out of the Tron universe that you can nab – and it’s on dubizzle. 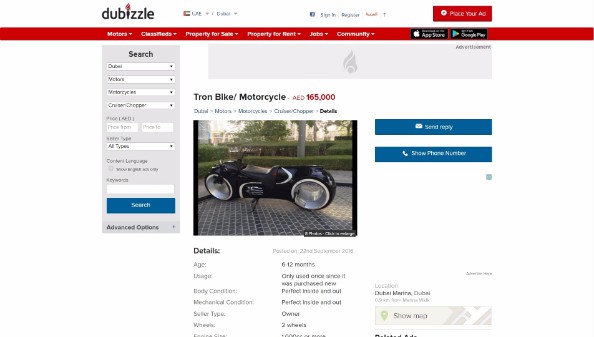 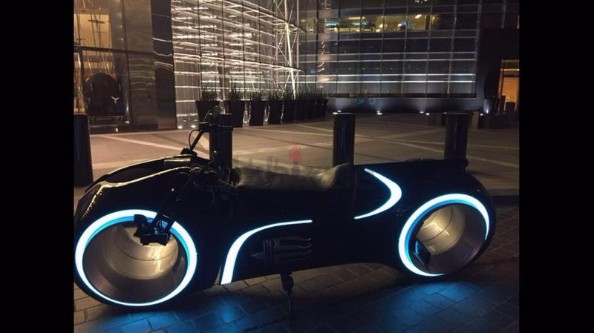 This custom-made, light-up bike is a life-size replica of the one from Tron: Legacy, and costs a cool Dhs165,000.

Yeah, it works too, and it’s only ever been ridden once.

The bike has a direct-drive electric motor and a computer-controlled digital electronic transmission, as well as suspension and hydraulic brakes.

The seller, Ebrahim Ostovar, said: “People literally stop in their tracks when they see the iconic motorcycle from fantasy as a tangible reality.

“I am very excited to find the replica a new home and hope to see it going down Sheikh Zayed Road one day.”

I DON’T UNDERSTAND, WHAT IS TRON?

If you’ve no idea what we’re talking about, Tron: Legacy was the sequel to the original Tron made in 1982.

In the original Tron, Jeff Bridges is a video game developer who gets sucked into his computer (quite literally) and is forced to participate in various gladiatorial games inside the digital world.

Tron: Legacy, made 18 years later, sees Jeff Bridges’ son come looking for him, and end up in the same world as he tries to break out his father.

A big part of the Tron universe are the light cycles.

The light cycles are futuristic motorbikes that leave behind a permanent trail of light that can’t be passed through.

The bikes are used in a deadly game that sees people duking it with their opponent to cause them to crash into their light trails.

You can now own this very bike. For a price.

Luckily the real-life version isn’t quite as morbid.

News
Things to do
EDITOR’S PICKS
Bla Bla: Dubai's huge new beach club is set to open this Thursday
READ MORE
16 of the best beach bars in Dubai for sundowners
READ MORE
Watch: A look inside Conor McGregor's Dhs20,000 per night Dubai villa
READ MORE
Where to get the Covid-19 vaccine in Dubai, Abu Dhabi and across the UAE
READ MORE
MOST POPULAR
Need a few laughs? These comedians are coming to Dubai in February
Is David Guetta going to perform in Dubai? It looks like it...
Amazonico Dubai launches new brunch and rooftop after-party
A stunning bright pink lake has been discovered in the UAE
Review: Goldfish Sushi & Yakitori, Dubai
YOU SHOULD CHECK OUT
Our website uses cookies and other similar technologies to improve our site and your online experience. By continuing to use our website you consent to cookies being used. Read our privacy policy here.