The UAE government weighs in on exploding Samsungs

Exchanged your Note 7 after the exploding battery kerfuffle? Well the trouble isn’t over – for users in the UAE and worldwide.

You know how the original Samsung Galaxy Note 7 explodes? Well this week they’ve discovered the replacements can explode too (leading Samsung to permanently halt all production on the just-released smartphone).

Bought one in the UAE? Well the UAE Ministry of Economy has just released a statement for Samsung Galaxy Note 7 owners in the emirates instructing them to return the phone and get their money back.

“People shouldn’t use their Galaxy Note 7 phones and should shut it down and return it to the shops,” the UAE Ministry explained. “They need to have a bill in order to return their money,” the government added, meaning if you don’t have your receipt, you could be in a sticky situation (but remember, most major retailers keep receipts in their system).

What if you go back to the original retailer you bought it from, receipt in hand, and they refuse to exchange the phone? Well then contact the consumer’s rights department and register a complaint. You can find out how to contact them here.

The Wall Street Journal reported today that the potential losses to Samsung over the discontinuation of the phone could sit at around Dhs10 billion. Ouch.

MORE ON THE EXPLODING PHONES 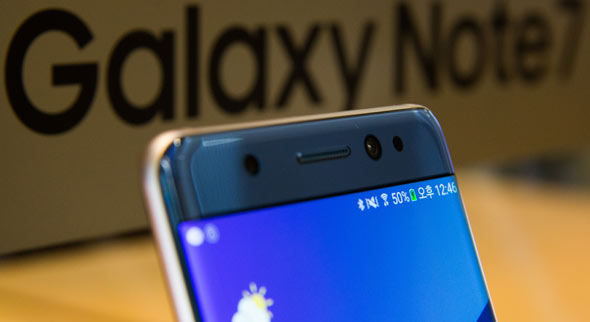 Samsung have now completely halted the production of the supposedly fixed Note 7 after continued battery explosions.

Samsung Global have asked all retailers worldwide – including the UAE – to stop selling the Note 7 model. They’ve also asked users who still have the device to power it down and stop using it immediately.

That means that if you exchanged your old Note 7 for a new one in the UAE following the recall, you should still switch it off.

This comes not long after a Note 7 replacement started smoldering aboard a Southwest Airlines flight from Kentucky to Baltimore in the US.

The phone started to make “popping noises” not long after the owner boarded the plane, The Guardian reported.

A number of airlines have already banned the phone aboard their aircraft, including Emirates and Flydubai.

WHAT’S EVERYONE DOING ABOUT IT?

In the USA, telecommunications firm AT&T have since stopped exchanging the older Note 7s for the new one, pending further investigation.

AT&T are still offering customers the option to exchange their Note 7s for another Samsung smartphone or device.

German telecommunications company T-Mobile have stopped selling the Note 7 entirely, and refuse to offer any exchanges.

As it stands, Samsung are yet to comment or confirm any problem with the replacement Note 7s.