The relatively new mountain road has been broken up in parts due to water damage. Here’s what we know so far…

You know the beautiful new mountain road that winds up Jebel Jais in Ras Al Khaimah?

Well, it was hit badly by the storms this weekend and entire chunks of the road are now broken.

Onlookers stop to see the damage on the mountain road near the border of Oman. Photos: Syabil

We still don’t know how long the road will be closed for – or whether it’s possible to just off-road around the broken parts of it – but we’ll keep you updated when more information is released.

Here’s a video that shows more detail of the damage:

*VIDEO & PICS: How crazy was the weather this weekend?*

Interestingly, the road is only a few years’ old, having opened in 2015: it winds more than 20 kilometres around the Jebel Jais mountain, taking you about 5 kilometres from the summit.

Reports are that most of the road is fine, it’s just small chunks that have been damaged.

This photo shows how much of the road was swept away by heavy rains over the weekend. Photos: Syabil

What we do know is that the broken parts of the road are below attractions like the Via Ferrata (so those driving to them may have to do a little off-roading first). 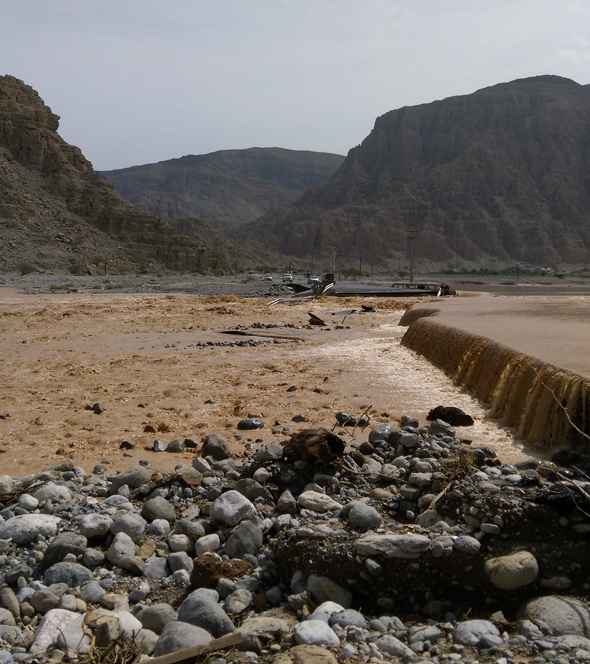 We called the Via Ferrata team and they told us that they will have a better idea of the road’s status when they reopen on Wednesday, so if you’re planning on visiting check in with them then.

We tried the Via Ferrata at Jebel Jais recently (which is the tallest mountain in the UAE, FYI). Here’s a glimpse of the experience:

Do you have any updates on the road or its status? Chuck us a direct message on Facebook to let us know.

News
EDITOR’S PICKS
Ramadan in Dubai: 38 iftars to try
READ MORE
Where can Dubai residents travel? Check out these 14 destinations
READ MORE
Rumours, facts and reveals: New Abu Dhabi bars and restaurants
READ MORE
UAE announces reduced working hours for Ramadan 2021
READ MORE
MOST POPULAR
Watch: A House of Artisans has opened in Abu Dhabi
Watch: How you can see Dubai from 555 metres high
Looking for a new hobby? Try one of these creative classes in Dubai
The best restaurants to have opened in Dubai so far this year
Looking for a reading club? Check out the Festival Plaza Book Club in April
YOU SHOULD CHECK OUT
Our website uses cookies and other similar technologies to improve our site and your online experience. By continuing to use our website you consent to cookies being used. Read our privacy policy here.