At 14, Aysha Al Naqbi has just become the youngest member of the Dubai Police’s Council of Young Leaders. The young novelist published her debut English-language novel Blue Moon at the impressive age of 13. She was honoured by Chief of Dubai Police Abdullah Khalifa Al Marri for her outstanding contribution to world class literature

A young-adult fantasy novel set in North Carolina, Blue Moon follows adventurous teenager Prim. The character faces a host of new challenges after she finds herself in a remote village. Aysha produced a sequel novel, Emerald Planet, which was released at the Abu Dhabi International Book Fair earlier this year. 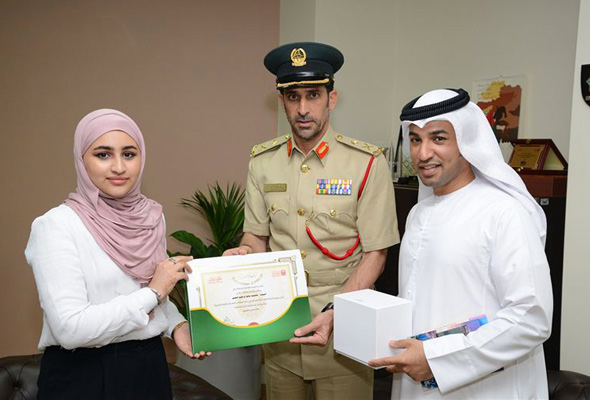 Commenting on joining the youth leadership council, Aysha described it as a ‘great honour and even greater responsibility’.

“As the UAE steadily moves towards the Vision 2021, our leadership recognises the instrumental role that youth plays in the development of the country, and I am glad to see that youth empowerment is a top priority for Dubai Police leadership,” she said.

The youth leadership council was started by the chief of Dubai Police earlier this year, and it aims to gather creative youth ideas, suggestions and initiatives so that the Police can better serve the young people of the UAE.

“I am glad to join the force’s youth council that works hard to ensure voice of the youth is brought to the table and to implement strategies that empower and engage youth in the development of the safety and security of the emirate,” the young Emirati novelist added.

This only adds to Aysha’s already busy schedule. She is already working on her third novel about a prince and princess living in a fancy kingdom. Sounds fabulous.

Culture
News
EDITOR’S PICKS
Ain Dubai will open with fireworks, live music and a drone show
READ MORE
Incredible Aura SkyPool to open in Palm Tower this November
READ MORE
Brit Grand Slam hero Emma Raducanu confirmed for Mubadala Tennis
READ MORE
What’s On Nightlife Awards 2021: Here are the nominees...
READ MORE
MOST POPULAR
17 of the best beach bars in Dubai for sundowners
You don't want to miss the Festival Plaza Book Club meeting this month
Skydiving to rides: 7 of the most adrenaline-fuelled activities in UAE
Famed restaurant Ministry of Crab to host a Dubai pop-up from November 3 to 7
O Beach Dubai will no longer be opening on Palm Jumeirah
YOU SHOULD CHECK OUT
Our website uses cookies and other similar technologies to improve our site and your online experience. By continuing to use our website you consent to cookies being used. Read our privacy policy here.