We've got more info on that island being built next to Mina Seyahi...

Well this area is going to get busier.

If you look out at the ocean just past Barasti and The Westin you’ll see another manmade island being developed. What’s it going to be? Well that will – within about four years – turn into Dubai Harbour.

What’s Dubai Harbour again? Well we told you all about it here, but as a refresher it will become a 20 million square foot suburb that’s home to the MENA’s largest marina, a huge mall and a 135-metre-high ‘lighthouse’ with a luxury hotel in it.

We’ve now found out that the development (which is by Meraas, the people behind City Walk and the new La Mer development in Jumeirah 1) will be home to not one but two cruise terminals, which means it will be able to accommodate 1.2 million passengers every year (that’s a lot of Big Bus tours). This could be a tourism game changer in the city.

Never before have two terminals been built at the same time and in the same location: Dubai certainly loves a world first.

Also, looking at the rendering for the development (above), it appears there will be a fancy bridge linking Dubai Harbour with the very end of the Palm Jumeirah’s Crescent Road (we’re not sure if this will be pedestrian only, but if it’s not it could cut driving time to the Crescent down by at least 20 minutes).

There will also be a bridge that connects Dubai Harbour directly to Sheikh Zayed Road. 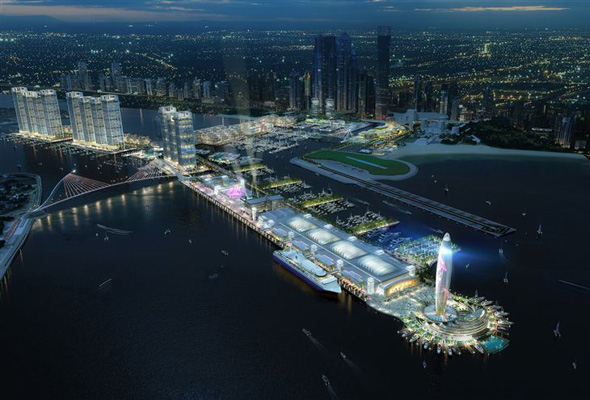 ALSO READ:
So what’s going to happen to the Expo 2020 site post Expo?
Dubai is getting its own ‘Venice’ (as well as a ‘snowing’ island)

First announced in January, Dubai Harbour will turn what was called Logo Island into its own suburb that will span an impressive 20 million square feet – Skydive Dubai and Dubai International Marine Club (DIMC) will also become part of this community. 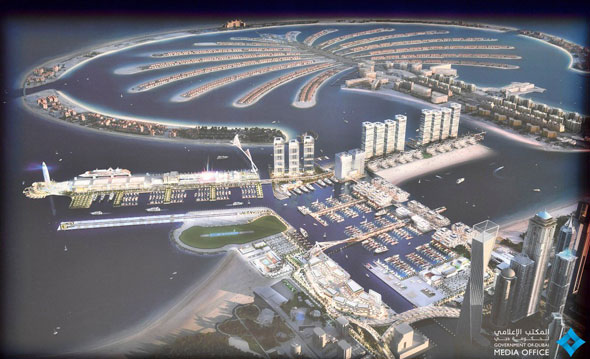 The star of the show will be Dubai Lighthouse. The 135-metre-high building (featuring a luxury hotel) will have a solid and smooth façade that is being built to be used as a gigantic screen for high resolution projections and light shows. At 135-metres, the building will be about half the height of the Address Downtown Dubai.

You will be able to access the island area via a road bridge, or public transport options. The monorail system will link both the metro and the Palm Jumeirah to the new area. This will also take you around the new suburb – from the shopping mall to Skydive Dubai, for instance.

There will also be a pedestrian bridge with a jogging and cycling track to connect Dubai Harbour to Palm Jumeirah. Water stations and three helipads are also part of the plan.

One thing’s for sure, by the early 2020s we’ll be truly spoilt for choice when it comes to places to hang out in this city…

Culture
News
EDITOR’S PICKS
Dubai hotels and restaurants to suspend entertainment until further notice
READ MORE
9 royal-approved Dubai restaurants
READ MORE
16 of the best beach bars in Dubai for sundowners
READ MORE
Where to get the Covid-19 vaccine in Dubai, Abu Dhabi and across the UAE
READ MORE
MOST POPULAR
8 of the best homegrown burger concepts in Dubai
Direct Etihad flights to Qatar from Abu Dhabi are inbound next week
Dubai Health Authority answers your questions regarding the vaccination
Expo Dubai 2020: What’s inside the Sustainability Pavilion?
Sheikh Hamdan launches project to renovate Al Fahidi Fort in Dubai
YOU SHOULD CHECK OUT
Our website uses cookies and other similar technologies to improve our site and your online experience. By continuing to use our website you consent to cookies being used. Read our privacy policy here.