All the best pics of celebs in Dubai from 2017

From Bieber chilling at Zero Gravity, to Bella skydiving, A-listers haven’t been able to get enough of our city this year…

Throughout the year, we like to keep an eye on which megastars (and not-so-mega stars) drop by the city. Whether on business or for a holiday, there’s certainly no shortage of them.

And from Justin Bieber at Zero Gravity, to Bella doing not one, but two skydives, we’ve rounded up our favourite celeb snaps from the last year in Dubai.

The world’s most famous diva touched down in Dubai back in February ahead of her performance at the Dubai Jazz Festival. The superstar singer made sure to take in the tourist sights, stopping by the Burj Khalifa soon after arriving – and we were there to document the special moment.

Yes. It’s @MariahCarey taking the classic #BurjKhalifa tourist shot ?? she was literally just here at #dubaimall … you can see her at jazz fest on Thursday ??… see our insta stories for video

The Brazilian football legend has been snapped several times in Dubai this year, but one of our favourite posts was this one from March. After launching the Ronaldinho Soccer Academy at the Koora Dome in October 2016, the former Barcelona star took this classy snap with the Burj Al Arab at the Al Naseem Hotel when he returned several months later.

The High School Musical star was in Dubai in March promoting his Hugo Man fragrance, but found the time to nip out to the desert, enjoying some dune bashing and a camel ride. For reasons unknown, the actor opted to forgo his shirt, but did earn sun-smart points by covering his head in an authentic red-and-white keffiyeh. 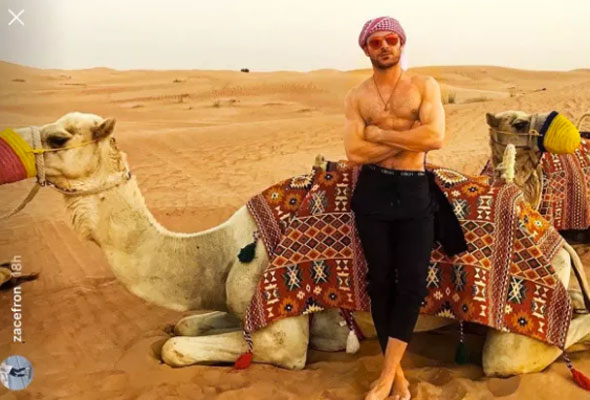 Initially here on business with Dior, supermodel Bella Hadid found plenty of time for fun in the UAE once her official duties were done – sampling shisha, partying on a yacht, driving a Rolls-Royce to Abu Dhabi and taking to the skies with Skydive Dubai… twice.

The Biebs shocked us all by making it to his eagerly-anticipated gig in Dubai right on time back in May – possibly because he had so much other stuff he wanted to do. The popstar visited Zero Gravity not once, not twice, but three times, quenching his thirst atop an inflatable swan. He also embraced his Canadian roots by playing some ice hockey in The Dubai Mall, before heading out to the desert for a classic camel ride (and treating himself to some more hydration). 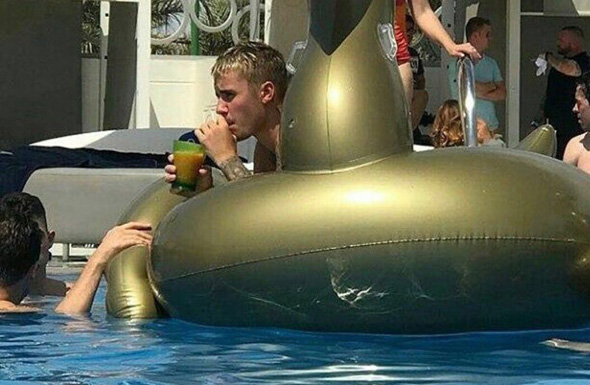 She was the special guest star at the Golden Mile Galleria Fitness Festival back in October, where she was spotted working up a sweat with her famous Bikini Body Guide workouts, but Instagram sensation Kayla Itsines still found time to take a trip to the Dubai desert. How’s that desert heat, Kayla? Feeling the burn?

☀️? Had the most amazing day today exploring Dubai! I can’t wait to meet all my #bbg girls on Friday, 5:00pm – Golden Mile Galleria? To register and for more details, visit http://bit.ly/2zZLFec !!! ☀️? www.kaylaitsines.com/app visit @goldenmgalleria

Anthony Joshua came to Dubai in November for a guest appearance at the final weekend carnival of the Dubai Fitness Challenge, but that didn’t stop the professional boxer getting in some downtime. He posted a Burj view selfie to his instagram, but was also been spotted hanging out with YouTube star Logan Paul, and partying hard at super club Base.

Making the most of her time in Dubai ahead of her Autism Rocks gig, Jennifer Lopez, aka J-Lo, and boyfriend Alex Rodriguez aka A-Rod were spotted at several hotspots in the city. As well as dining at Catch and heading to Bikram yoga, the duo were spotted dining at Nobu, with none other than chef Nobu Matsuhisa himself.

With the great Chef Nobu Matsuhisa in Dubai!

Seriously, who wasn’t in Dubai over November? After a last-minute date change to their gig, Brit boyband Take That were spotted soaking up the sun in Dubai at the end of the month.

Touched down in Dubai after a monster of a flight from down under! #mydubai #lmyw #takethatdxb

Pop powerhouse Gwen Stefani had a little Sweet Escape in Dubai at the start of December while in town for an exclusive performance at the grand opening of the Renaissance Downtown Hotel. The singer then swapped the skyscrapers for the sand dunes, heading out on a desert safari (and looking super stylish to boot).

Film
News
Nightlife
EDITOR’S PICKS
Dubai hotels and restaurants to suspend entertainment until further notice
READ MORE
9 royal-approved Dubai restaurants
READ MORE
16 of the best beach bars in Dubai for sundowners
READ MORE
Where to get the Covid-19 vaccine in Dubai, Abu Dhabi and across the UAE
READ MORE
MOST POPULAR
8 of the best homegrown burger concepts in Dubai
Direct Etihad flights to Qatar from Abu Dhabi are inbound next week
Dubai Health Authority answers your questions regarding the vaccination
Expo Dubai 2020: What’s inside the Sustainability Pavilion?
Sheikh Hamdan launches project to renovate Al Fahidi Fort in Dubai
YOU SHOULD CHECK OUT
Our website uses cookies and other similar technologies to improve our site and your online experience. By continuing to use our website you consent to cookies being used. Read our privacy policy here.