Since Dubai Safari opened in early December, it’s seen more than 100,000 visitors through the door. And now, an extra special guest has stopped by for a visit.

On Sunday, HH Sheikh Mohammed bin Rashid Al Maktoum, vice president of the UAE and ruler of Dubai, paid a visit to the brand new park, taking a guided tour of the eco-friendly facility which is home to more than 2,500 animals.

According to news agency, Wam, Sheikh Mohammed was briefed by Hussain Nasser Lootah, Director-General of Dubai Municipality, on the various areas of the park, which sprawls across 12 million square feet. 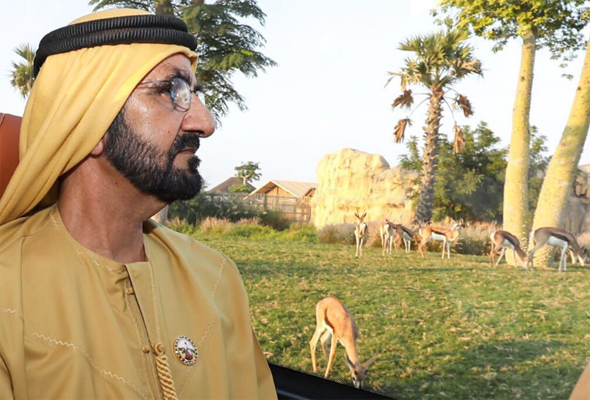 The Dubai ruler also managed to check out some of the separate areas of the park, which is made up of four villages, including taking a trip through Safari village which is home to lions, tigers, hippos and antelopes.

Here’s what happened when What’s On visited Dubai Safari:

Dubai Safari is now open, and it’s free entry for a limited time! So we went to check it out… #whatsondubai #dubaisafari #mydubai #experiencedubai

News
Things to do
EDITOR’S PICKS
When is the UAE's next public holiday?
READ MORE
Zanzibar-inspired restaurant Mikoko Hut opens at UAQ mangrove beach
READ MORE
Christmas Day in Dubai: Festive brunches, lunches, roasts and more to book
READ MORE
This magical winter garden is back at Habtoor Palace Dubai
READ MORE
MOST POPULAR
Last chance to get your fast passes for Abu Dhabi F1 concerts
10 turbocharged things to do in Abu Dhabi this weekend: Dec 9 to 11
Deliveroo is dishing out free Krispy Kreme doughnuts
Bye bye Bidi Bondi, hello Byron Bathers Club
Four reasons to celebrate the festive season at Four Seasons Dubai
YOU SHOULD CHECK OUT
Our website uses cookies and other similar technologies to improve our site and your online experience. By continuing to use our website you consent to cookies being used. Read our privacy policy here.