British singer Dua Lipa managed to get in a bit of sightseeing during her recent trip to Abu Dhabi, and visited the capital’s Sheikh Zayed Grand Mosque before her weekend gig on Yas Island at the du Forum.

The star posted the below image of her visit to her Instagram page, saying, “Before our show in Abu Dhabi we went to visit the most beautiful Mosque. Such an honour. Thank you.”

Before our show in Abu Dhabi we went to visit the most beautiful Mosque. Such an honour. Thank you // shot by @pixielevinson 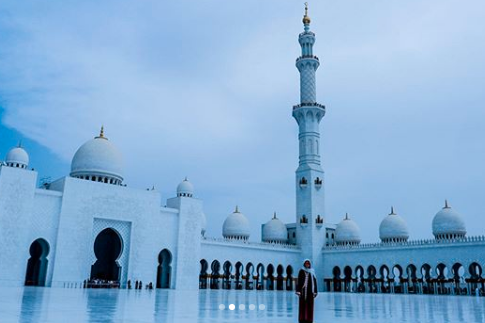 Lipa, who is currently on a world tour, is only 22 years old but has already sold more than one million copies of her self-titled debut album, Dua Lipa, and has won several awards. She was crowned Best New Act at the 2017 MTV Europe Music Awards and won the Best Pop Video – UK award at the 2017 UK Music Video Awards. Earlier this month, she won two Brit Awards for British Breakthrough Act and British Female Solo Artist. She was most-streamed artist on Spotify in 2017, beating the likes of Taylor Swift.

She followed up her visit to the Grand Mosque with her gig on Yas Island, where she performed hits including her biggest so far, New Rules.

The ? is finally here! Drop us a heart if you’re ready for her #DuaLipaUAE #OnlyOnYas #duLive #DuaLipa #Dance #Music #Party #NightOut

She’s not the first artist to have visited Abu Dhabi’s Grand Mosque. Fellow popstar Rihanna visited in 2013 (although it was a controversial visit – she was asked to leave over taking inappropriate photos). Rocker Rod Stewart visited before his gig in 2017, and Britain’s Prince Charles and his wife Camilla, Duchess of Cornwall, have also visited in the past.